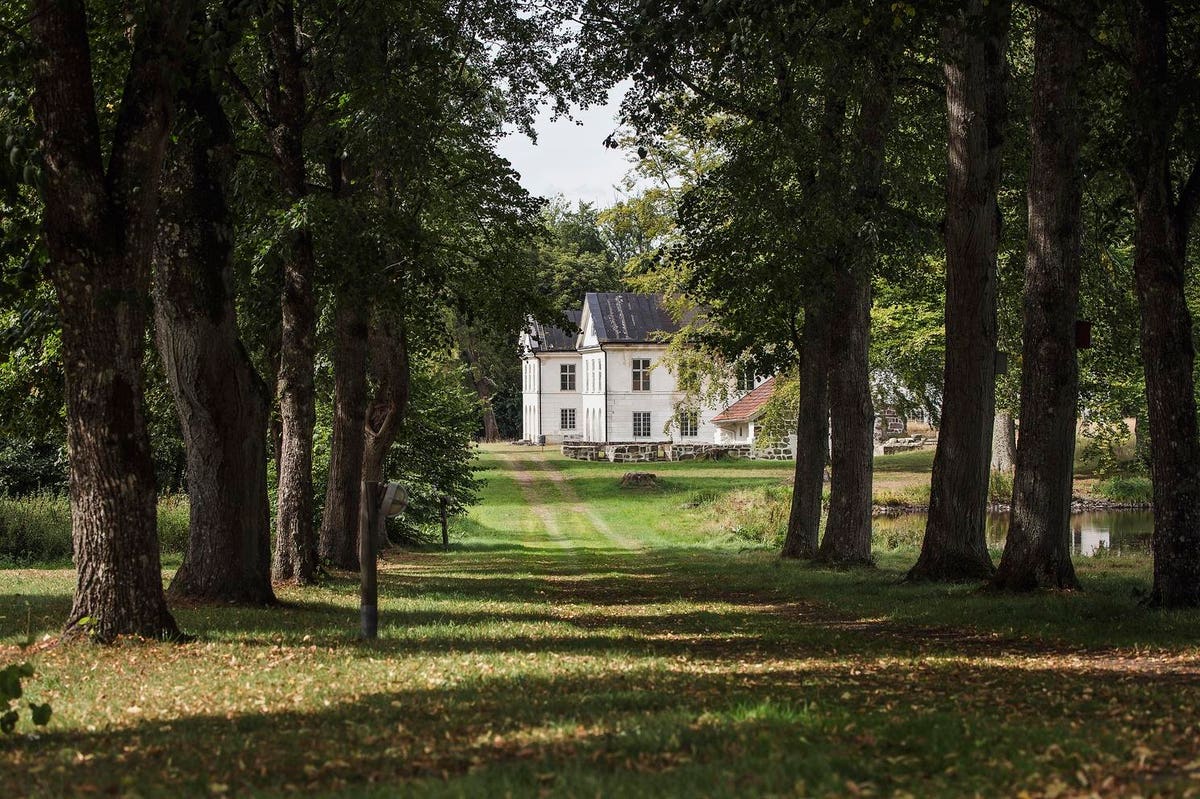 Standing at the crossroads of epic transformations–from politics and science to war and finance–Herrevad Castle is a rare example of a medieval power center once coveted by popes and kings.

With remarkable influence spanning two Scandinavian countries, the 28-room castle and a manor house with six large apartments and attic rooms, was recently brought to market after 16 years of ownership. The 21.6-hectare property (53 acres) is located in Sweden’s southern Scania (Skåne) County.

“You cannot live in all 12,000 square meters (130,000 square feet),” says retired owner Steen Damkjaer, who is selling the property precisely because of its enormous size–optimal for a business venture, not a bachelor pad.

Those familiar with the property cite its vast investment possibilities. They include transformation into several hotels and restaurants or centers for wellness, nature, sports or art and culture. Residences could also be rented or owned. Nearby, similar revamped castles, such as Krapperup and Sofiero, are popular among tourists for day trips or overnight stays.

The property, which during its four-century heyday had become one of the largest and wealthiest monastic houses in Denmark, heralds baked-in historical branding. That starts with its founding in 1144 as Denmark’s first Cistercian monastery (Scania was formerly part of the Kingdom of Denmark).

The property is the only privately owned abbey in Scandinavia, according to Damkjaer, and is a member of the European Charter of Cistercian Abbeys and Sites Association.

The listing is offered as two sites that can be purchased together or individually: the two-story manor house and its 1.6-hectare spread (about four acres) or the three-story castle (built out from the original abbey) and attendant buildings sited on 20 hectares (about 50 acres). The latter property includes a chapel, granary, three substantial log homes and converted military buildings.

The lands are near the small town of Ljungbyhed and a 30-minute drive from the port city of Helsingborg.

The property’s 12th-century origins are fully evident and include regal vaults, a knight’s hall, ceramic tiles made by monks and limestone floors “polished by many feet over the centuries,” says Beqo Hoti, founder and CEO of Shaza Luxury Real Estate, which holds the listing.

“You can sense the story of the abbey and castle as you walk through,” he says. “The monks, the knights–you can’t help but visualize the history. It’s a hidden gem with huge potential, something quite exclusive and worthwhile for tourists.”

The property’s branding possibilities are indeed supernal. The partially extant abbey was the site of a famed 1572 celestial discovery. It blew open the antiquated notion that stars and planets were embedded in celestial spheres powered by a mysterious fifth element, quintessence.

In short, Herrevad was the setting for an event that ushered in an altogether modern model of the universe: the Tychonic System. More on that stellar event later.

In the mid-1700s, two wings were added to the abbey’s main structure, turning it into the current U-shaped castle of 3,000 square meters (32,292 square feet). Nearly a century earlier in 1658, Scania was ceded to the Swedish crown after Danish-Swedish wars ravaged the region for hundreds of years. Under Swedish rule, the castle became a military center for the next 300 years.

The 1,632-square-meter (17,566-square-foot) manor house, built in 1815, includes plans for dividing the current six apartments into 22 two-bedroom apartments, each with its own bathroom. Offices are located on the bottom floor. Damkjaer currently lives stylishly in one of the apartments, all of them move-in ready. “You could rent out the spaces tomorrow,” he says.

Damkjaer has since stripped the castle of its 1930s-era electric and plumbing systems. He also cleared walls, floors and ceilings of previous renovations to reveal original designs. An 1805 granary was transformed into a concert hall, the building notable for its thick gray stone. Damkjaer also carved a striking art museum from a former cavalry riding area.

A chapel used for weddings is adjacent to the castle. The 12th-century structure is the former sacristy for a 53-meter-long (174-foot) sandstone church, long crumbled along with its huge dome.

The chapel’s extant Gothic rib vault ceiling is a marked vestige of Cistercian architecture, termed the “architecture of light” and considered the most appealing of medieval designs. The austere designs, free of ornament, depended on the sun to decorate walls given that the monks equated God with light.

Just inside the chapel doorway stands an upright tombstone of a crusader, a member of the iconic Knights Templar, a paragon of Christian nobility. The mysterious order attained immense wealth along with political influence during the medieval era. As elite fighters, the Knights Templar was tasked with accompanying and protecting monks and others during pilgrimages.

“It really blows your mind,” Hoti says of the gray tomb, wholly covered with the order’s cross set in relief. Bernard of Clairvaux (venerated as Saint Bernard) was a founder of the Knights Templar as well as the Cistercian order. At the behest of Archbishop Eskil of Lund, he sent 12 Cistercian monks from France’s Cîteaux Abbey to Scania to establish Herrevad Abbey. The inauguration took place around 1150 with foundations laid by 1158.

The chapel also harbors a bishop’s tomb and a stone commemorating Danish King Christian II (for a time, also the king of Sweden and Norway). The stone is inscribed with the date 1514. Six years later, the monarch ordered the execution of 82 Swedish nobles in an event known as the Stockholm Bloodbath.

Behind the castle is a kungsgård, a royal farm that dates to 1745–used by Scandinavian monarchs and royal families when traveling. It includes three log houses with 3,000 square meters of combined living space (32,292 square feet). The structures were built in the mid-1800s. One is used as a riding stable and the other two are under renovation.

“It was used by many Swedish kings as well as Danish kings–it tells you that this place was really a central place of power,” Hoti says.

The grounds, graced with two ponds and ancient oaks, include stables and barracks constructed of stone. Windows in the castle, manor house and other buildings are built of core pine and many are double-facing. “They last for centuries,” says Hoti, citing the wood’s renowned durability. Deep-set to 50 centimeters (about 20 inches), the windows reveal the walls’ thickness that acts to insulate the structures.

Most of the castle and manor house floors are of pine, except for limestone on the castle’s bottom floors.

The property’s most recent history saw it as a training camp for the Swedish military from 1858-1898 and, from 1902-1957, it served as a horse training ground for the country’s army. From 1960-1994, it became a flying school for the Swedish Air Force. In 1994, the land and its buildings became privately owned.

During its first four centuries, however, Herrevad had risen to become a mighty landowner, possessing more than 400 estates–donated by wealthy families as a type of indulgence, a ticket to heaven for the devoted.

The property’s economic and administrative power was partly due to its siting–near the Rönne River alongside a well-traveled road between Sweden and Denmark. It had access to thriving markets in both countries. In time, Herrevad accumulated so much land that it became an independent county.

Herrevad’s 400-year monastic era ended with the advent of Denmark’s Protestant Reformation in 1536. All religious houses and their extensive lands fell to the crown. Herrevad was given to Steen Bille, a celebrated nobleman and the uncle of Tycho Brahe.

From his Herrevad laboratory on the evening of Nov. 11, 1572–36 years before the advent of telescopes–Brahe observed a supernova, Stella Nova, which surprisingly appeared in the Cassiopeia constellation.

With his discovery, the astronomer proved that the heavens were indeed not immutable, but rather ever-changing–the supernova had no daily parallax against the background of fixed stars.

Brahe later published major works that became crucial contributions to astronomy. Among other endeavors, he also designed and built instruments revolutionizing the field (his Mural Quadrant that measured stellar altitudes is quite impressive).

Herrevad’s coat of arms includes a shield with a star, referencing Brahe’s famed discovery–an impressive proprietary signature for the estate. Damkjaer also honored Brahe’s discovery by bottling spring water that bubbles up near the old abbey. He labels and sells the water to locals and restaurants as Stella Nova.

“The monks settled here because of the water–the finest you can drink,” he says, adding that Lund University in Scania has tested samples. “It has huge potential.”

Besides the property’s water and abiding history, Damkjaer says he especially enjoys the region’s fresh air. “It’s very close to nature,” he says. “You can live freely with good health here.”

When the Swedish military sold the property in 1994, 587 hectares (1,450 acres) of the surrounding forest were converted to a nature reserve that shares a name with the property–Herrevadskloster (or Herrevad Abbey). It can never be developed. More beauty is a 10-minute drive from the castle: Söderåsen National Park with its 1,625 hectares (4,015 acres) of beech forests, towering cliffs and streams.

The property and surrounding lands have places to fish, kayak and hike. An airfield and golf courses are nearby.

“And if you’d like a day in the city, you’re only 30 minutes away,” says Damkjaer, referencing the historic coastal city of Helsingborg (population, 114,000). The Ängelholm Helsingborg Airport is located about 35 kilometers (about 22 miles) north of Helsingborg.

The drive to Copenhagen takes about an hour and a half, and Sweden’s third-largest city, Malmö, is an hour’s drive away.

Beqo Hoti of Shaza Luxury Real Estate is the listing agent for the property. The asking price is available on request.