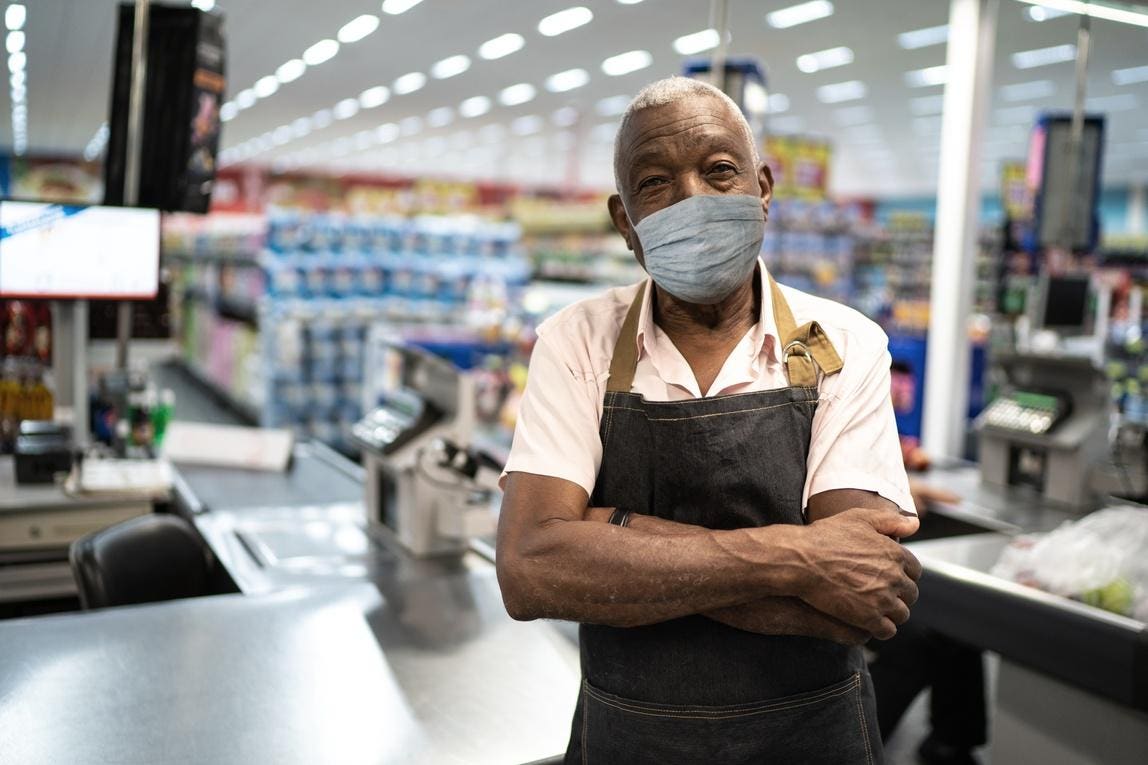 The Covid-19 pandemic made many pre-existing economic inequalities worse, including the precarious situation of Black and non-white workers and the pressures on women to juggle work and care responsibilities.  The pandemic also magnified economic pressures on vulnerable older workers, and our post-pandemic economic and equity policies must include them.

Why do older workers matter to the economy?  First, they make up a startling high share of the U.S. labor force, and are essential to a full economic recovery.  About one out of four workers are aged 54 are over and by 2029 their share will grow.

The United States Bureau of Labor Statistics and an analysis in The New School’s Retirement Equity Lab’s quarterly report on older workers show that out of the six million jobs expected to be added to the economy by 2029, 4.4 million will be filled by workers over 55.  That’s over 70 percent of all expected new jobs. Workers over 65 have the highest projected labor force growth rate of any age group.

Many older workers would like to retire, but can’t afford it.  As our private pension system has shifted from defined benefits (a regular, predictable stream of payments) to defined contributions [401(k)-type plans that depend on people’s individual contributions], retirement is much harder, especially for low-income workers.

Economist Teresa Ghilarducci, director of the New School’s Schwartz Center for Economic Policy Analysis (SCEPA), calls the 401(k) system a “failed experiment.”  (She is my colleague and also my wife.) It rewards very high-income people with the lion’s share of the tax breaks, while many workers have meager balances or no plan at all.  The work at SCEPA (our most valuable resource on older workers and the economy) shows there is virtually no 401(k) coverage for the lowest paid 50% of the workforce, and inadequate financial balances even for those with a plan

But in spite of inadequate retirement coverage and the need to keep working, the pandemic recession has forced many older workers into premature retirement.  SCEPA finds that “at least 1.7 million more older workers” retired sooner than expected in the pandemic.

As with other economic outcomes, the damage isn’t evenly spread out. Black workers and those without a college degree suffered much higher rates of premature retirement, while having lower retirement wealth to begin with.  SCEPA estimates that in 2019 older workers with a college degree lived in households with an average of $167,000 in retirement savings.  But for households without a college-educated worker, the median savings were only $9000.

So if the economy needs workers, and these older workers need money, why don’t they just keep working? The pandemic hit older workers hard; SCEPA finds that “unemployment rates for workers 55 and older”stayed higher than rates for mid-career workers for the first time since 1973.  Older workers were disproportionately concentrated in vulnerable jobs and face employer discrimination.  They “lost jobs faster and returned to work slower” than their mid-career counterparts.  And for older Blacks, women, or those with less education credentials, the challenges were even harder.

SCEPA has a valuable comprehensive policy guide to address these problems.  One key proposal is creation of an Older Workers’ Bureau in the Department of Labor (DOL), modeled on the pathbreaking Women’s Bureau founded in the roaring twenties when the nation’s demand for labor outpaced supply and women emerged as voting citizens.  The DOL already has offices focused on veterans, disabled workers, and women, and this new bureau would provide information, analysis, and policy ideas to federal agencies, businesses (especially small businesses), unions, state and local governments, and community colleges and training providers.

The problems of older workers cut across economic sectors and federal programs (including Social Security, disability, Medicare and Medicaid, job training and education, and health care) but many stakeholders have a limited view of the complex and interconnected problems facing older workers.  There’s no unified source of analysis and information that looks at all of these programs and stakeholders systematically.   An Older Workers’ Bureau would fill this gap, improving program performance and helping businesses and labor plan and perform better.

Other reforms include lowering the Medicare age to 50 years old from the current 65, and make Medicare the “first payer” rather than a backup to private insurance.  This would take cost pressures off many companies, especially small businesses.  And it actually could save money in the long run, as more workers would have health care helping them avoid sudden and costly declines in health as they age.

There are other good ideas, including expanding Social Security (especially for the lowest earners), President Biden’s proposed mandatory paid leave, fighting age discrimination in the workplace, and creating guaranteed retirement accounts, which is a 15 year proposal to cover all workers who currently lack private retirement plans.

But the first essential step to help older workers and the economy is for policy makers, advocates, businesses—and all of us—to recognize the economic importance of, and challenges facing, older workers.  Without attention to their needs, both they and the overall economy will suffer.

Novavax says its Covid vaccine is 90% effective, plans to submit data to FDA in third quarter
Apps are changing the shopping experience at The Vitamin Shoppe and Tractor Supply Co.
London’s most expensive penthouse offered in a whisper listing for $247 million
Thinking Of Getting Into Cryptocurrency? The Top 10 Crypto Tax Mistakes To Avoid
Robert Redford’s Utah Horse Ranch Hits The Market For $4.9 Million