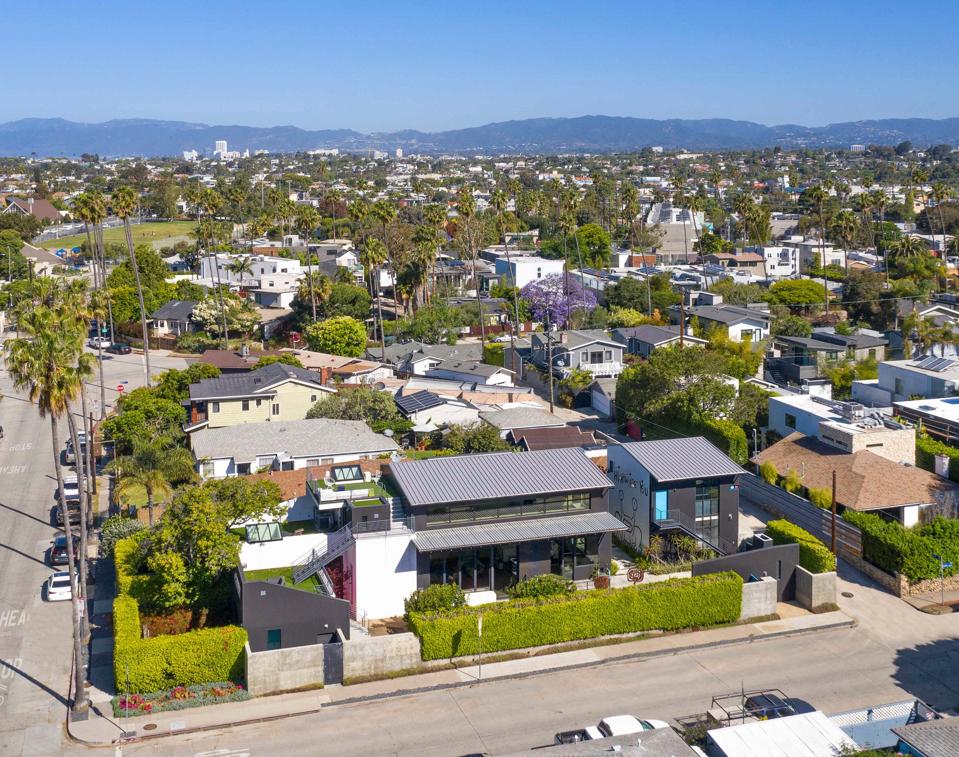 “It’s like a million incremental little decisions that either pay off or don’t.”

For Todd Piccus, building his one-of-a-kind home in the heart of Venice Beach was the dream. But as the head of legal and business affairs at Mattel prepares to let the custom compound go, he’s reflecting on the whirlwind process that went into creating one of the area’s most recognizable homes.

Hedged and fenced from the street, the custom built residence is a breezy modern compound that opens to expansive outdoor space surrounding several modern structures. The grounds unfold in layers, gradually tapering and expanding to create quiet corners and intimate spaces throughout the double lot. Art pieces sourced or recreated from Piccus’ experiences and travels form their own vignettes, giving each area its distinctive look and story.

Bursts of pink, orange and green peek out from the sleek corrugated metal shell of the structure. The front of the warehouse-like form was modeled after the loading dock at Bergamot Station, the late 1800s railroad station turned breezy arts center in Santa Monica. A bar located on Austin’s famous Sixth Street also served as inspiration for the industrial vibe.

“I’ve had people send me postcards of my house from all over; I hear people walk by and say, ‘this is the house!’,” Piccus said of the public’s reaction to the property, which is listed for sale at $7.95 million. “It’s very much a house that people can relate to.”

When Piccus set out to build the home he envisioned it as his last. In addition to customizing just about every inch of the space, he also planned the property to accommodate him later in life. A separate guest house was designed to be accessible directly from the street and is plumbed for a kitchen should he ever wanted to create a guest house or even a ground-floor bedroom suite. One of the bathrooms was configured so that it could be potentially moved and replaced with an elevator.

“There’s a lot of hidden flexibility in the house,” he said.

Inside, the core of the main house consists of a voluminous communal area divided into several individualized spaces that puts the chef’s kitchen and dining area above the living and family rooms. Reached by a steel staircase, the primary suite makes up the entirety of the second level.

Across the yard, a mural paying homage to late Austin songwriter and street artist Daniel Johnston stretches across the two-story studio/garage. A pixelated mosaic by Invader stands out from a corner of the structure; the piece is among the widely popular street artist’s first private residential works.

Combined with oversized windows and bi-folding doors that meld the indoor-outdoor space, Piccus says the design allows for the exterior details and landscapes to be enjoyed from nearly every room.

There is a saying among some artists that no piece is ever truly finished, and Piccus can undoubtedly relate. Even as he prepares to sell the property, he says he’s still tinkering with shapes and colors.

“I haven’t gotten the orange right,” he said, pointing towards the living room. “I’m having my painters come next week because it’s supposed to be more of a pumpkin [hue].”

The level of precision and detail also led to disagreements during the design process. Piccus says that although he has remodeled homes in the past, those projects paled compared to building one from scratch. It wasn’t until after a tense exchange with his architect that he understood the full scope of building a custom home.

“I remember him saying, ‘Todd, the only part of your house that isn’t custom are the appliances’,” he said. “And it was true. It didn’t register to me that what we were doing was particularly detailed. It’s like a million incremental little decisions that either pay off or don’t.”

Convincing artists with no desire to do commissions was another hurdle.

Before recreating Johnston’s iconic “Hi, How Are You” mural, the University of Texas at Austin graduate first looked at trying to buy the massive installation. “I thought I could have it disassembled and installed here, but it turns out it’s a protected landmark.

Undeterred, he spent three years trying to reach the artist, who had contended with both physical and mental health issues before passing in 2019. It was only after receiving Johnston’s blessing that Piccus worked with a local artist to recreate the mural down to the last brushstroke, even going so far as bringing in a lighting consultant for the project.

“It’s a tough thing to figure out when you desperately want something from someone and they’re not that interested,” Piccus said.

Above all else, Piccus coveted an original piece from Invader but getting close to the French street artist known for his pixelated mosaics, let alone getting him to agree to the private commission, proved nearly impossible.

Like the England-based artist known as Banksy, Invader conceals his identity and installs his works under the cloak of darkness. His so-called “Invasions,” which feature pixelated mosaic tile works often inspired by the arcade game Space Invaders, can be seen in over 30 countries and have garnered massive appreciation worldwide.

Reaching out through various channels, Piccus connected with Invader in 2011 about another project but the artist soon went silent. (Piccus believes the artist “going dark” that year was the result of the Los Angeles Police Department’s policing of MOCA’s “Art in the Streets” event, the world’s first-ever exhibition of street art.)

Two years later, after buying his current property, Piccus says he was able to re-engage the artist, even offering to sign a nondisclosure agreement. From there, the next challenge was cutting a questionable deal with the artist’s dealer in Belgium.

“As a lawyer, I did a deal that I would never allow my clients to do, because he’s anonymous,” Piccus said. “I don’t know what his name is. I didn’t know if he’d show up. It was very risky.”

Once the terms were agreed upon—Invader was given exclusive access to the property for a week during its construction—the artist quietly dropped in to install the pixelated composition on the side of the home. Piccus says the piece is made even rarer by the fact that it’s the only time the Invader has ever done something that wraps a building corner.

Nearly every color, piece and fixture has a backstory, but few design details have more significant meaning than the handmade tile work. After discovering the tiles in Culver City furniture store years ago, Piccus sought out the local artist who created them by hand, commissioning them to make those found throughout the house. The pair have maintained a relationship ever since, with the artist even playing a role in his decision to sell.

It wasn’t until the artist agreed to make tiles for Piccus’ next house that the attorney even became comfortable with the idea.

“It sounds ridiculous, but it was the connection with him a year and a half ago when the lightbulb went off, and I started thinking about putting my house up for sale,” he said. “It helped me realize I can do something else.”

When he does sell the house, Piccus says that he will paint the walls white (if the new owners ask) and even commission a mural to replace the existing one. One thing that won’t be moving with him? The prized Invader art. In addition to agreeing to leave it in place, per the terms of the commission contract, he says the mosaic is permanently affixed to the house.

“If I or anyone else (including Invader) tried to remove it, it would fall apart.”