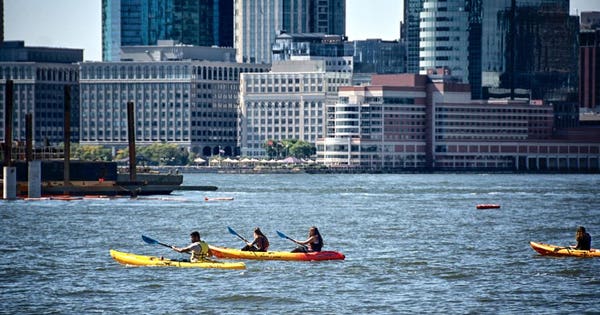 Samuel and Louise Edelman are challenging the voracious state of New York in the US Supreme Court.  The top rate of 8.82% is among the highest in the nation (and then there can be a city tax on top of it), but it is the reach that the Edelmans are complaining about not the rate.  They were being taxed on the gain from the sale of their business because New York considers them a resident.  They were taxed by Connecticut, which is where they are domiciled on the same income.  Neither state gives them a credit for tax paid to the other state on that part of their income.

New York City, USA – September 30, 2018: A small group of people are seen Kayaking in the Hudson River just off of Hudson Park in Lower Manhattan. Behind them is a cityscape of skyscrapers in Jersey City, New Jersey.

I’m leaving the discussion of the legal merits to the Other Coverage section below. What I would like to discuss is an idea that might help taxpayers in similar circumstances and also a bit of background on how voracious New York is being.

If you think federal income tax is too complicated, don’t try to become a state and local tax (SALT) expert.  The other reason to not be a SALT expert is that they don’t get enough respect.  I’m going to explain how things generally work, so I am making up some states since if I used real states, I might miss some subtle trap.

Every state seems to have one or more subtle traps.  Then there is New Hampshire.  Don’t get me started .  So let’s talk about the generic states of Agony and Ecstasy, which have income taxes of the most generic sort.

If Agony is your permanent home, your domicile, Agony will tax you on your worldwide income.  “Domicile” is an almost mystical concept, as I explained here.  You always have a domicile.  If you abandon your domicile, it remains your domicile until you establish a new one.

So you live in Agony, but you work and own a business in Ecstasy.  Ecstasy gets to tax you on what you earn there.  Agony will give you a credit for those taxes to Ecstasy.  The credit will generally be the lesser of what you paid Ecstasy or what Agony taxed you on that income.  If Ecstasy has a lower rate than Agony, it is a wash.  If Ecstasy has a higher rate, you are out of pocket the difference.

It is simple and fair.  If the states have the same rate, the one where you live ends up getting the tax on your income from investment and the like and the state where you work gets to tax your income from working.  It’s good enough for Agony and Ecstasy, but not for New York and the growing number of states that follow the “New York rule”.

A New York day is kind of like a New York minute.  Any part of a day counts toward the 183 days unless you are traveling.  So even if the Edelmans were using the New York apartment only occasionally, all the workdays counted (and maybe some shopping or theater days).

We don’t know the exact circumstances of the Edelmans, but looked at more generically, we can see that you might want an apartment in Manhattan so that you could have an easy to reach place to stay after a long day at work.  Maybe one or two days a week, you don’t want to drive back to Connecticut and you want to have a shorter commute in the morning.

As it happens, the solution is just a mile across the river in Jersey City.  Luxury waterfront condominiums are available and thanks to the PATH system, you are effectively connected to the New York City subway system.  There is a ferry and if you must drive you are very close to the Holland Tunnell.  In terms of convenience to midtown Manhattan and the financial district, it beats many parts of the actual city.

Of course, you still have to be careful, because you don’t want to end up being a statutory resident of New Jersey.  Every night you stay over will end up counting as two days, if NJ uses the same day counting technique as New York (I have been digging, but have not been able to confirm that).  And there might be other reasons why you are going to New Jersey which will beef up the day count.

The problem of the statutory resident rule creating double taxation was recognized back in 1996. And a fair solution was worked out to avoid double taxation.  The statutory resident state should give a credit for the taxes paid to the domicile state on income that is not sourced to a particular state.  Timothy Noonan outlines the concept in this piece in Tax Analysts.

Mr. Noonan does not claim authorship of the idea rather he traces it to an agreement of the North Eastern States Tax Officials Association in 1996.

As is explained in this piece from Roscoe & Cole, the legislature in Connecticut and Massachusetts followed through on the agreement, but New York did not.  Connecticut’s credit was conditioned on reciprocity, but Massachusetts was not.  So someone domiciled in New York, who is a statutory resident of Massachusetts will get a credit for New York tax on non-sourced income, but not visa-versa.

Kyle Sollie, Michael Lurie, and Jennifer White of Reed Smith filed an amicus brief on behalf of The Business Council of New York.

Maria Koklanaras has something behind the Law360 paywall.

If the Supreme Court doesn’t step in, the same kind of tax could expand to other states, according to a brief from the Tax Foundation and a second brief from American University’s Kogod Tax Policy Center Executive Director Donald T. Williamson and the National Society of Tax Professionals.

Before the Edelmans’ case, “the incentives were clearly driving legislatures toward harmony,” according to the brief from Williamson and the National Society of Tax Professionals.

“But legislatures are watching this petition, and if the Court denies review here, the winds will shift,” the brief said.