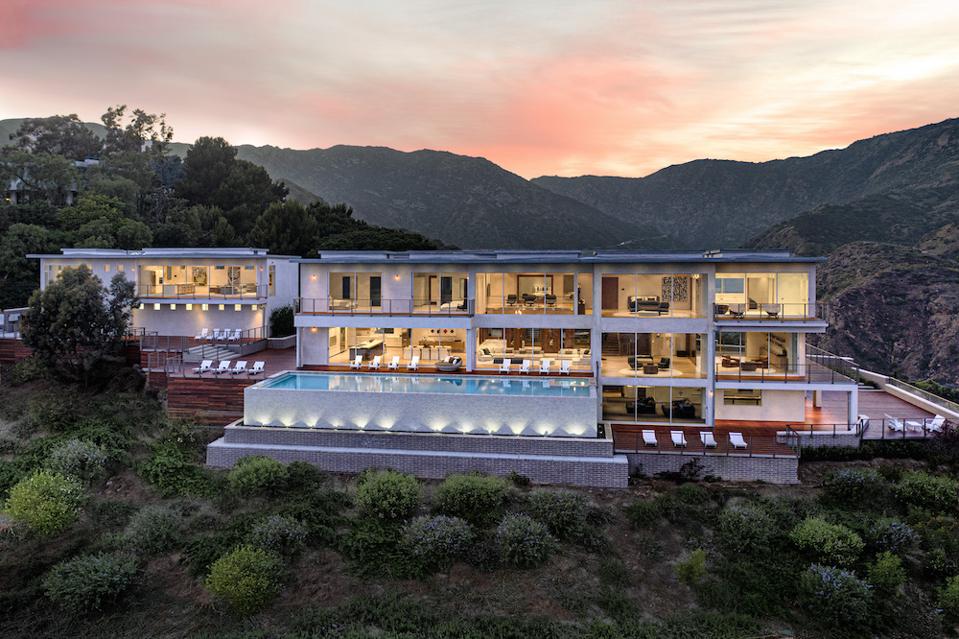 “I’m not a big fan of walking through the front door and giving up the water right away,” says designer Scott Gillen. He’s referring to the design intent behind his latest project, The Malibu Series—a collection of 12 homes throughout Malibu which total over $500 million in combined asking prices. While not all of the homes are fully completed, sales have officially launched today via listing agent Tracy Tutor with Douglas Elliman. Gillen’s goal is the same for these as it is with all the properties he has built during his career. Each house unfolds gradually as someone experiences each room, each turn of a corner and each view, whether it is from close up or far away. “I let you see what I want you to see when I want you to see it,” says Gillen. “The house reveals itself.”

Five of the homes in this package are on a 24-acre expanse which is one of the largest land purchases in Malibu history, according to Tutor. Gillen purchased those 24 acres for $50 million in 2017, the Wall Street Journal reported. Another of the homes, dubbed The New Castle, is on the site where a former Scottish style castle stood looking over the rest of Malibu from high up on a hill. That home burned down in 2007, taking with it over a dozen other homes and businesses. Gillen purchased the land and fire rebuild rights in 2015 for $9.7 million and built an entirely new structure, called The New Castle, which is now nearly complete and being released as part of The Malibu Series with a new asking price of $75 million. Forbes had an exclusive video tour and interview with Gillen when the project was about two-thirds complete so head to that link for what it looked like when it was in progress.

With prices ranging from $14.25 million to $100 million, two of the twelve homes have already gone under contract (one asking $14.25 million and another asking $40 million), showing how bullish the Malibu market continues to be. This is where, until just about a month ago, the highest price record for the Los Angeles area was a beachfront home bought by Hard Rock Cafe founder Pete Morton for $110 million. That record was broken by the sale of the Holmby Hills estate previously owned by television producer Aaron Spelling, which closed for $119 million, setting a price record not just for Los Angeles but California as a whole. The current highest-priced listing for Malibu is NBCUniversal Ron Meyer’s home asking $125 million.

The 12 homes that make up the Malibu Series are all rooted in a mid-century modern aesthetic but in a way that incorporates high ceilings and beach views. “Open space, open kitchens, the same style I’ve always done but I’ve brought in a bigger flair,” says Gillen. “There’s 15-16 foot high ceilings heights with big clerestory windows I’m bringing in from Sweden.”

One such detail is a repeating pattern in some of the spine walls, as pictured above. This level of intricacy is integral to Gillen’s work so he can capture a unified flow to the space in as as subtle a manner as possible. “The spine walls drives the path of the house. I want someone to walk in and not realize the seamlessness but at the same time, look at it and say ‘how did he do this?’ If it stands out, I’ve missed the design.”

In another of the homes Gillen used tiered ceilings to balance out the lengthy living room. Here the proportions of horizontal length are complemented by discreet mullions in the vertical space so there is a cohesiveness to the room.

Below is the living room inside The New Castle, showing another example of the one-of-a-kind designs going in each home. Here hand-scraped wooden beams add a warm touch to what is still a very contemporary build.

A view of the backyard for one of the homes on the 24-acre parcel, highlighting the importance of balancing all the angles—from the pool on the sloped hillside to the intersection points of each wall.

Below is another view of one of the exteriors, showing a great example of how the mid-century modern design is the fundamental inspiration for the homes but they each have a California feel.

For more pictures and design details head to The Malibu Series website or contact agent Tracy Tutor for more information about each listing.