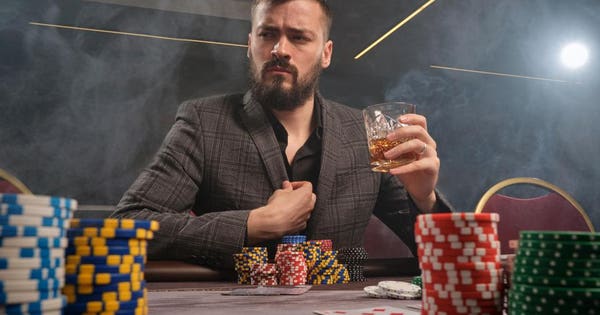 For decades, computer programmers have been trying to beat multiplayer games by finding reliable patterns in data.

Researchers at Facebook and Carnegie Mellon University published a whitepaper in Science Journal in July that flips this switch. Their software embraces randomness, and it is reliably beating humans at games.

Smart bearded person in a classic gray suit is playing poker at casino in smoke sitting at the table with chips and cards on it . He is holding a glass of whiskey in his hand and looking away. Gambling addiction. Sincere emotions and entertainment concept.

This is a big step forward for data science. It shows where the world is headed.

By now, investors should know that machine learning and artificial intelligence have taken the enterprise world by storm. Companies like Alphabet, Amazon and Netflix built huge platforms in internet search, ecommerce and media distribution by using software algorithms to understand what their customers wanted, sometimes even before they knew it.

Collecting and understanding data is key.

There have been big strides in programs mastering board games like checkers and chess. A super AI called AlphaGo, a prototype from Google Mind, even conquered Go, an extremely complex Chinese strategy game. It trounced Lee Sedol, the best Go player in the world, in a widely publicized match.

Many software developers assumed Go was unassailable given the state of AI development.

But AlphaGo caught Sedol off-guard. Developed by playing against itself millions of times, the software learned to be unpredictable. In the end, Sedol couldn’t determine why moves were being made.

Pluribus, the Facebook and CMU collaboration, leans hard on being unpredictable. It makes sense.

Whereas checkers, chess and even Go are limited to two players, poker traditionally involves more, creating a significant challenge for an AI. Exploiting the weaknesses of a single player would not be enough. Pluribus was designed to take on five world-class opponents simultaneously.

With six players, six hands of cards, the bets, and the sheer multitude of possible outcomes, the game would have overwhelmed even the most robust supercomputer. Pluribus needed a reliable edge.

The big idea: During training, as Pluribus played against itself, the AI noted the outcome of games given all of the variables. Then, the software systematically played game after game, altering a variable each time.

Pluribus learned that some moves, even crazy ones, were winners in defined circumstances. Flummoxed players, for example, would fold. And that is the key.

We humans fidget nervously; we behave predictably when we are anxious. Professional poker players can spot these tells a mile away. Pluribus does not really play to its opponents’ weaknesses. It plays to its inherent strength — it has no tell. It is completely unpredictable.

The proof is in the gameplay.

Ruane even marveled at its relentless consistency.

The investment angle might not be immediately obvious. The story is not poker. It’s data science and progress. Companies are now determined to do for their businesses what Alphabet, Amazon and Netflix did many years ago.

Alteryx Inc. makes the best-in-class platform for data scientists. Its ecosystem allows them to plug in data (often without coding), build models and perform predictive analytics to get insights fast using machine learning and AI.

The Irvine, Calif., company logged a successful IPO in March 2017, offering 9 million shares at $14 on the New York Stock Exchange. At the time, Dean Stoecker, co-founder, told CNBC that legacy data analytics was completely broken and Alteryx was ready to fix that.

It was a bold pitch, but Stoecker was on to something bigger — digital transformation.

Companies are realizing that they are sitting on a goldmine of information locked inside their retail, manufacturing and supply chains . All that data could be mined to run the business more efficiently, and even build new business models.

Banks are using the software to do derivatives and fraud modeling. Retailers are doing omnichannel analytics. Healthcare companies are working out genome sequencing. In a YouTube video, Stoecker says professional football teams are even using Alteryx to perform player analytics.

Its customers range from Adidas and Dairy Queen to Johnson & Johnson, The Home Depot and Unilever.

Alteryx was named a leader in the 2018 Gartner Magic Quadrant for data science and machine learning platforms. And it sits in the middle of a digital transformation stack that could be worth $15 trillion.

The business is growing fast and that is being reflected in the share price. Alteryx shares are up 104% this year, and 209% during the past 12 months.

Shares trade at 166x forward earnings and 26x sales. This stock is not cheap, but it’s the right stock for this era of new business models built with data.

Growth investors should consider buying Alteryx into bouts of weakness.

The Future Of Economic And Workforce Development
Oscar-nominated ‘Everything Everywhere All At Once’ features an IRS ordeal, but here’s what really happens in an audit, according to tax pros
Stocks making the biggest moves after hours: Microsoft, Texas Instruments, Capital One & more
GM to invest $918 million in new V-8 gas engines and EV components
Comcast beats expectations even as broadband growth slows, Peacock racks up losses