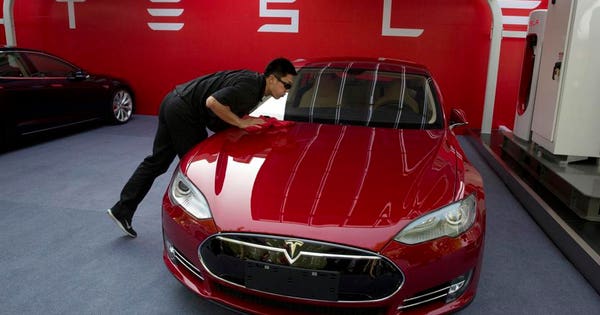 Those who have been peddling the idea that Model 3 demand has peaked saw some vindication in Tesla’s Q2 report. Deliveries hit a record high, but decreased margins seemed to support the argument that Tesla had to cut prices to move their cars. However, Gorden Lam, a Marketocracy manager who has given us the best guidance on Tesla, thinks Tesla is still on the right track.

Ken Kam: What did you think of Tesla’s Q2?

Gorden Lam: Tesla delivered a record 95,356 vehicles in the 2nd quarter which is over a 100% increase compared to the same quarter last year. Unfortunately, Tesla posted a $408 million loss ($117 million of which was associated with restructuring) or an EPS loss of $1.12, missing analyst estimates by 107% and that sent the stock tumbling. Despite the large loss, I think Tesla is still on the right track.

Kam: Do you think Tesla can be profitable in the 2nd half of the year?

Lam: I don’t expect a profitable quarter in the next 18-24 months. There will be a lot of spending for the new Gigafactory in China and Europe, production lines for the Model Y and the upcoming pickup truck in addition to the service centers and new charging stations. It will be a tight balancing act between cash flow and expenditures.

The bigger issue I have for Tesla is can they continue to scale and eventually bring costs down? And I think they have! Labor costs have been reduced by 50% compared to a year ago. We’ll eventually see an improvement in battery costs. More Gigafactories are being built to accommodate global demand.

Tesla really outdid themselves with the Model 3. But, when the Model Y (SUV Crossover) is released in 2020, I believe it will be even more popular than the Model 3.

Kam: Automotive margins fell to 19%, is this a problem?

Lam: Yes, the overall margins came down a bit due to reduced sales of the Model S & X, but also from the fact that the federal tax credit was slashed in half. Gross profit for the Model 3 actually improved.

Kam: What did you think of the recent Model 3 price drop?

Lam: What may seem like a drop price drop too many analysts may actually be more of a price increase from a different angle. The Model 3 Standard Plus that now includes Autopilot starts at $38,990 (excluding any tax credit incentives). Previously the Model 3 Standard Plus cost $37,500, plus $3,000 for the Autopilot option, so one could argue that the price dropped by $1,510 if you included the Autopilot option, but Tesla simply added more value to the bundled package while offering a slight discount. The base price of the Model 3 remains the same.

Since the Autopilot option is software and not hardware, it’s a sunk cost for Tesla. By including the Autopilot feature bundled together for a slight discount, Tesla will gain higher profit margins. This is a good strategy for Tesla in terms of boosting profit without really adding any additional cost to its finished product. Most consumers with a tighter budget will tend to gravitate toward the base model without any options, and rather than just selling the base model to the customer, why not include an upgraded option at a special bundled price instead! Tesla just up sold the consumer while making it look like a discount.

I would not be surprised if Tesla drops prices again on its upgraded options when the federal tax credit is further reduced.

Kam: Is Tesla gaining traction with the mass market?

Lam: When Tesla delivered the first Model 3s in late 2017, it was mainly competing with fully electric vehicles like the Nissan Leaf and Chevy Bolt, but we saw the Tesla Model 3 take market share from the entry-level luxury car market such as the BMW 3 Series and Mercedes Benz C Class.

Kam: How low does Tesla have to price the Model 3 to succeed with the mass market?

Lam: The mid-range price of the Honda Accord or Toyota Camry is in the $25,000 – $30,000 range. Although Tesla’s Model 3 prices are higher, the total cost of ownership is actually less over a five year period.

Partly, this is because the Model 3 also holds its value much better. According to Kelly Blue Book, a mid-range Model 3 is likely to retain 69.3% of its actual sales price while the Toyota Camry will only retain 48.6% of its sales price after a three year period.

Kam: Do you see any signs of weakening demand for the Model 3?

Lam: A quick look on Craigslist for any used 2018 Model 3s for sale shows only a limited number of vehicles available, and currently there is no significant discount for any of the used model 3s on the market. The average price of a used 2018 Model 3 is currently $46,404 on Kelly Blue Book. Based on this data I am confident that the Model 3 shows no signs of weak demand even in the used car market.

My Take: Unlike political discussions, investment discussions always start with agreement on the facts. The best insights often come from arguing about what the facts mean. Sometimes the people with the most money get it wrong. When this occurs, there is an opportunity for knowledgeable investors to make money because the wealthier investors’ volume of trades can move the price significantly in the wrong direction.

Gorden first bought Tesla at $196 in March 2016 when Goldman Sachs and UBS said to sell. Even though his position is only somewhat profitable now, Gorden’s portfolio returned 11.45% for the past 12 years, more 3% a year higher than the S&P 500’s 8.23%. Over the last 10 years, he has outperformed 75% of U.S. equity mutual funds. That’s why I find it easy to be on his side of the argument

To see why Gorden is a Marketocracy manager and sign up to be notified when he has something to say, click here.

Pending Home Sales Improve In January As More Buyers Return
House GOP study group is proposing changes to Medicare. Here’s what you need to know
Stocks making the biggest moves after hours: Microsoft, Texas Instruments, Capital One & more
These are the key tax forms you need to file your return — and when to expect them
Dementia Prevention: Do You Love Your Brain?