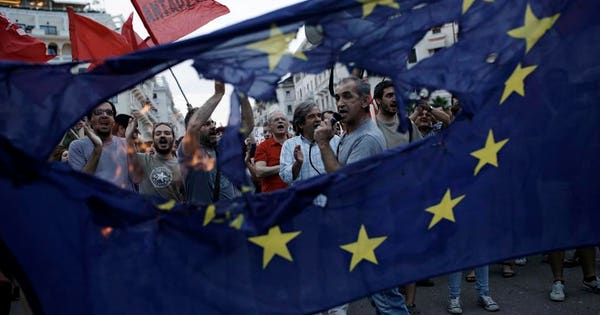 There’s an eerie but placid tone in current U.S.-Europe relations.

Investors should view it as the calm before the storm that could eventually wreak havoc across global financial markets.

“It seems most likely that tensions between the U.S. and Europe rise in the coming months,” writes Marc Chandler, chief currency market strategist at Bannockburn Global Forex.

Chandler is more than knowledgeable about such matters. He’s a font of wisdom on the topic. So it pays to carefully consider things when he makes such a warning.

He points to a slew of “potential flashpoints.” Consider the following matters:

Defense spending. Germany, Europe’s largest economy, fails to keep up with its NATO commitment to spend at least 2% of GDP on its own defense. In fact, it is worse than you can imagine.

Over the period 2003 through 2018 Germany, which ran a budget surplus for the last four years, did not once spend more than 1.4% of GDP on its own defense, according to data from the Stockholm International Peace Research Institute. Mostly it spent even less than that. Meanwhile, the U.S. continues to do more than its fair share of defense spending compared to its NATO allies.

Trade. Rightly or wrongly the Trump administration doesn’t’ think the European Union is playing fair when it comes to buying U.S. products. Notably, there is an absence of U.S. cars on the roads in Europe, whereas there is no shortage of European branded vehicles in the U.S.

Taxes. France’s president Macron says he wants to hit large digital companies with taxes. On the face of it that may sound reasonable until you remember that almost all the large digital companies are from the U.S. and none are from France. Chandler points it out bluntly. When you use the word, “American” rather than “digital” and you suddenly see a problem pending because it looks like France is picking on American firms.

Iran. The U.S. and Iran haven’t gotten along at all since the 1979 Islamic revolution overthrew the Shah. And President Trump sees the Islamic Republic as a threat, hence the recent sanctions on Iran. But the EU doesn’t quite see matters that way with Europe’s need for cheap oil likely a motivating factor.

China. Just like with Iran, the EU doesn’t see China through the same lens that White House officials are using. China’s tech company Huawei will likely be at the center of any flareup. The firm is suspected of close links to China’s communist rulers and therefore represents a security risk, at least as viewed from the U.S.

The European Central Bank. Europe’s economy isn’t doing well. The major countries of the single currency area, the eurozone, are limping along. This is particularly true of Italy, Germany, France, and Spain. The result is almost sure to be an ECB-led dip in the cost of borrowing. In turn, that will likely lead to a drop in the value of the euro versus the dollar.

U.S. President Donald Trump may see the weaker euro as an unfair competitive advantage for EU exporters versus U.S. ones. That said, it doesn’t mean there’s a currency war pending yet. “It is a step that is much higher up the escalation ladder,” writes Chandler. In other words, that may happen, but it’s not imminent.

It seems likely that increased tension on any one or more of these matters could send markets for various assets reeling. Don’t say you weren’t warned.

Pfizer expects 2023 sales to decline as much as 33% compared with record-breaking 2022
Top Wall Street analysts find these stocks compelling
Amid food inflation, more shoppers turn to dollar stores for groceries
Wait until age 70 to claim Social Security: ‘The return on being patient is huge,’ says economist
The Fed Is Poised To Hike Interest Rates Again – Is It Enough To Keep Away A Recession?