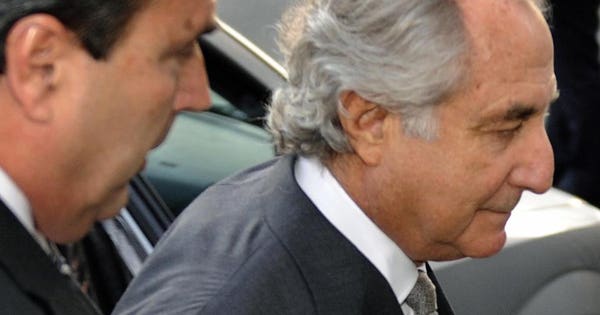 Ponzi schemer Bernard Madoff has been in prison over 10 years (time flies) but still has another 140 years to go. He’s now asked President Trump, who has done only 10 pardon/commutations in his presidency, to cut his prison term short and allow him to come home … wherever that is.

In July, Madoff filed Clemency Case File C285393 with the Office of the Pardon Attorney asking for a “Commutation of Sentence.”  In the past, President Trump has issued some pardons without going through the Pardon Office that traditionally goes through the request and gathers information on its merit.  In the case of Madoff, one can be assured that victims of his scheme will have something to say about the request.

Each year, thousands of requests for clemency are filed but few are granted.  Presidents of past tended to have their acts of clemency granted between the end of the election of their final term and the day that they scoot out the door.  Bill Clinton famously pardoned financier Marc Rich, who was a fugitive from justice at the time.  Rich was on the run for 16 years after a 1983 indictment for 50 counts of wire fraud, racketeering, trading with the enemy and evading more than $48 million in income taxes.  Not a good guy.

There really are few options for Madoff to ever leave prison.  There is no parole in the Federal Bureau of Prisons.  So no matter how well Madoff behaves, he has to serve 85% his term in prison (allotment for Good Time).  In the event that he is terminally ill, the BOP does have a Compassionate Release Policy that can make inmates eligible for release.  However, the terms of such releases are strict and have to be approved by the federal judge who sentenced the person.  This is not likely to happen.

Under the First Step Act, inmates can be eligible for release if they are over 60 years old and served over 60% of their sentence.  In this case, Madoff meets the age requirement but he would need to have served 90 years of his prison term.

It is unlikely that Madoff will leave the confines of the federal prison in Butner, NC, which is a BOP medical facility.  It has all of the medical equipment and staff to care for most every illness an inmate may encounter, including cancer treatments.  In the event that Madoff needed care at a local facility, they would simply handcuff him and take him to a hospital that could care for him.

The best guess is that Madoff probably thought “why not?” and sent the clemency package in.  There were no details on the reasons for his request (health, he’s really sorry, etc.) but he would have to make one compelling case.  I’m thinking Trump will pass on this one … maybe.

States have $70 billion in unclaimed assets. How to check if any is yours
Ford posts full-year net loss, ugly fourth quarter as ‘execution issues’ plague operations
State Experimentation With Wealth Taxes.
How The IRS Might Spend Its Billions To Improve Taxpayer Services
Peloton shares jump after fitness company posts subscription revenue growth