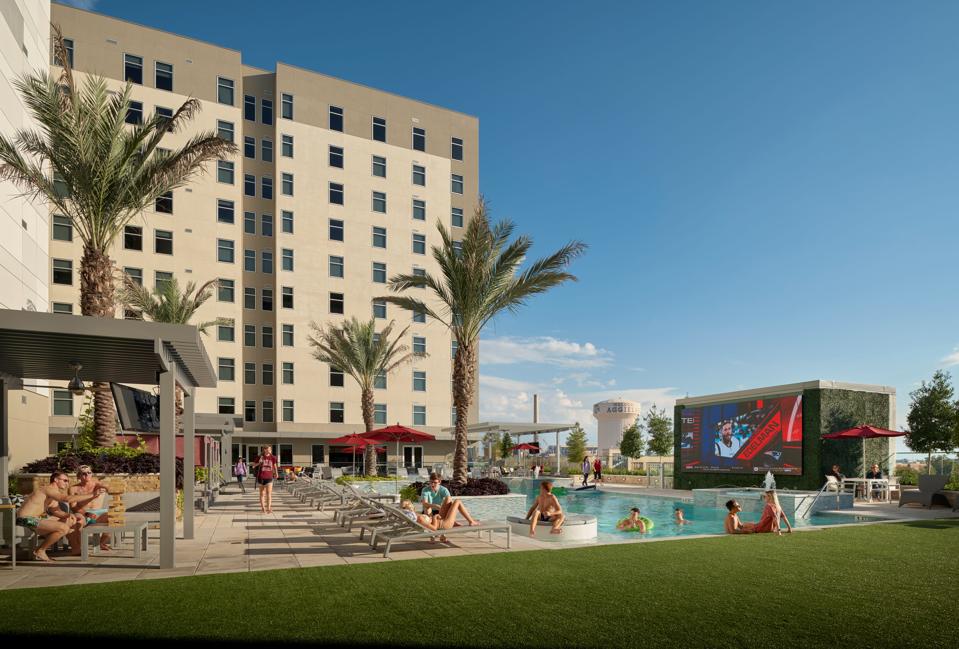 Student housing has come a long way in the decades since most Baby Boomers went to college. Our generation had a twin bed, desk and chair, maybe a hot plate and Crock Pot, in tiny dorm rooms. The bathroom was down the hall and the gym was across the quad – no fun in winter months for millions of us.

As students head to college campuses campuses in August and September, more are luxuriating in spacious apartments steps from class with premium amenities. There was off-campus housing when Boomers were undergrads, too, but it tended to be somewhat run down, and it rarely offered luxuries.

Three trends seem to be driving this growth in upscale housing. The first is the population increase in the 18 to 24 year old demographic, which has soared from 27 million in 2000 to close to 31 million in 2016. While the age group has been fairly flat since then, it’s projected to grow again slightly for the next decade and then strongly after that.  Overall growth has spurred demand for more housing and a newer, nicer supply.

A second trend is the increase in international students. According to the Migration Policy Institute, more than a million international students were enrolled at U.S. colleges in the last year studied, 2016 to 2017. Over the course of the past seven post-war decades, there’s been a five-fold increase, and international admissions now represent five percent of overall enrollment, the group reported.

Many of these international students are master’s or doctoral candidates working in high-earning fields like engineering, information technology, math and management, according to MPI, and heavily self-funding their studies. Traditional dormitory housing isn’t necessarily the ideal setup for this cohort, and they have the means – including professional employment here – to afford superior alternatives.

Both of these factors are helping to spur significant private investment in the student housing market — the third trend. These can be on-campus or near-campus apartments, and represent $29 billion invested. “New and renovated student housing tends to be vastly improved over the dorms of yesteryear,” observes Eric Luskin, senior vice president of The Scion Group, a firm that manages and consults on $5 billion in student housing assets across the country.

“There are two drivers that I’ve observed as major factors,” he says: “Both schools and private housing operators realize that the costs to provide attractive, enjoyable and supportive communities are less than the cost of vacancies.” Second, he adds, “As investors have entered this space assuming operating risk, designing communities that will attract and retain high levels of occupancy is, of course, critical. Students generally appreciate being treated as adults; for returning, upper division and older students, this is particularly valued.”

Luskin notes that competition for students has grown fiercer in recent years, and housing plays a role in which schools attract the most desirable applicants. “Based on what we have observed, whenever a student is on the fence among two or more institutions, the campus lifestyle — particularly the quality of housing options — becomes extremely influential and is sometimes the deciding factor.”

The differences, of course, are that the students don’t own their units, and may be paired with roommates they didn’t know before moving in together. Even with the ‘prototypical roommate from hell,’ they’re still living more comfortably together than they would in a tiny dorm room. The rooms themselves are larger, and each occupant has more comfortable, amenity-rich community space to escape into when desired.

“The quality of design has the ability to impact the student’s environment,” shares Brooks Howell, residential leader for multinational architecture firm Gensler. His teams are creating housing with student input factored in, including basics like security, parking and campus convenience, but also personalized with the school colors and styles. “A well-designed project can create better community, a better study environment and a better living situation. The value of good design is ultimately a priceless differentiator.”

Gensler’s Houston and Phoenix teams oversaw the design of privately-developed housing projects for the University of Arizona, Texas A&M and Arizona State University. “The amenity spaces in these projects, from the resort-style pool decks to the clubrooms and fitness centers, are designed to be luxurious, and are often more upscale than a typical, urban luxury apartment project.”

Aggies are getting outdoor cabanas, a penthouse sky deck and poolside Jumbotron to cheer their team on game days at Gensler-created Aspire College Station. Sun Devils get to sun worship in hammocks or on a tanning terrace at Arizona State’s Tempe location. There are also fire pits for cooler nights and a pet park.  Not to be outdone, the most privileged UA Wildcats can luxuriate in well-appointed two-story  Tucson penthouses.

“Student housing projects are finally catching up to the scale of luxury housing in both design and amenities,” Howell comments. “We are seeing larger pool decks with scenic views, an increase in on-site dog parks, as well as expansive outdoor sport zones for games.” Exercise room size and sophistication are also growing, he says, and are more frequently including yoga studios and group fitness rooms. The integration of ride sharing zones for pickups and drop-offs are becoming the norm, as well, acknowledging current realities.

The Gensler executive points out that several of the architects on his project teams graduated from the colleges whose housing they were designing. It’s likely that the classes of 2023 and beyond will be living better than they did as students.

Not a fan of cruising? The hack that could change your mind
What will TV look like in three years? These industry insiders share their predictions
Ford’s U.S. sales start 2023 on strong footing, boosted by F-Series and Bronco
35% of millionaires say retirement is ‘going to take a miracle,’ report finds
Biden to revisit ‘billionaire minimum tax’ in State of the Union address