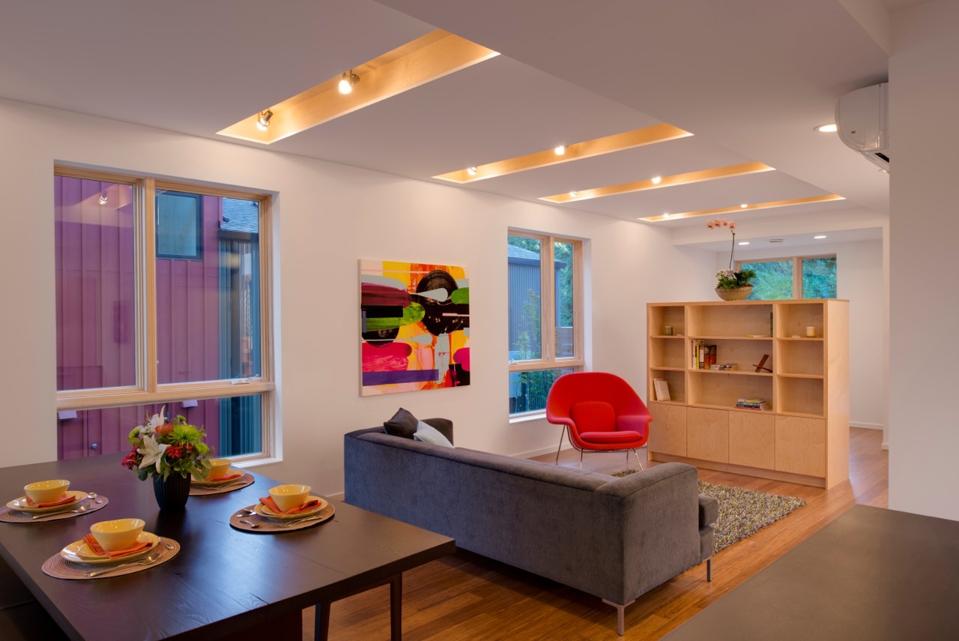 One of the optimal goals in building or remodeling a home is to have it be as energy efficient as possible – who doesn’t want to save money on heating and cooling? Mini-split heat pumps have been used around the world for many years. But they have been gaining in popularity in the United States in recent years because of their energy efficiency, size, ease of installation and the ability to zone the different areas of the house.  Ductless heating and cooling systems also known as mini-splits and ductless heat pumps were first introduced to the US just about 35 years ago from Japan.

These systems are un-ducted so there is no leaking air from ducts. According to the United States Department of Energy “Duct losses can account for more than 30% of energy consumption for space conditioning, especially if the ducts are in an unconditioned space such as an attic.” Ductless systems require just a small three-inch hole in the wall connecting the interior and exterior units. Particularly in renovations, it is much simpler and less expensive to install a ductless system than one that requires ripping out walls and ceilings to install ducts.

In the past, many homeowners were reluctant to use these systems because they didn’t like the look of the interior units. However, the indoor units can now be recessed in the ceiling or mounted near the floor so they are less apparent than the units installed on the upper wall.

Mini-split ductless systems are composed of three main parts—an indoor air-handling unit, an outdoor compressor/ condenser unit, and a remote control that operates the system. A smart phone or computer can also control some units. Heat is transferred using refrigerant expansion and compression, in much the same way as a refrigerator works. During the colder months, heat pumps move heat from the cool outdoors into the warm house, and during the warmer months, heat pumps move heat from the cool house into the warm outdoors. They move heat rather than generate heat, so they can provide up to four times the amount of energy they consume. One outdoor condensing unit can be used for up to eight indoor air handlers in different zones of the house, each controlled to meet the needs of certain rooms. The number of heat pumps required will depend on the size of the home and how well insulated it is.

Each of the zones will have its own thermostat so only the occupied rooms can be conditioned, saving energy and money. Some units are self-correcting – so they can increase or decrease output depending on the set temperature.

These systems are also small in size, cost less to install than traditional HVAC systems, and use a fraction of the energy, substantially reducing utility bills. ENERGY STAR qualified systems can reduce cooling and heating costs by 30 percent. Newer models are continuously coming on the market that are increasingly efficient.

Hasbro warns of weak holiday quarter results, cuts 15% of its workforce
Oscar nominations: ‘Everything Everywhere All at Once,’ ‘Top Gun: Maverick’ among leaders
Bill Gates says no country ‘gets an A’ for its Covid pandemic response—including the U.S.
The outgoing CEO of a giant autos firm had a message for his successor: Don’t be like me
What’s The Difference Between Roth IRAs And Roth 401(k)s – Updated For 2023