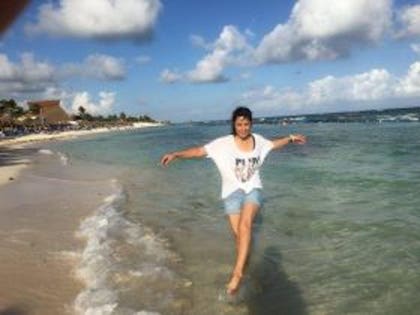 Balancing in the surf in Mexico

If you have founded or run your own start-up, even within a larger institution, you know that doing so requires vision and courage and can at alternate times be exhilarating, frustrating, demanding, scary and challenging.  It can cause you to question your abilities and then to gain great satisfaction at the abilities you do develop that you didn’t even know you had.  It can seem like a waste of time or the most productive and rewarding thing you’ve ever done.  And it can do all these things in the space of a few hours.

Moving abroad, in my case, to Mexico, was a lot like that.

I speak from experience.  I’ve founded, funded, ran and / or sold several startup businesses in the US, some for myself and some for others.  My most recent company, Best Mexico Movers (not surprisingly, started after moving to Mexico), is just over nine months old, so I’ve had the chance to compare experiences anew.

Here are the ways in which moving to Mexico and running a start-up are similar:

Chuck Bolotin with dogs at beach in Baja California

You are doing something out of the ordinary and therefore scary.

The large majority of people never start, run, or are involved with a start-up or something like it and even a smaller percentage ever move abroad, so by definition, doing so is off the beaten path.  Being off this well-worn path scares a lot of people.

And it’s not just those who venture forth to the path less traveled who could understandably be scared.  It’s also one’s family and social support system.  Upon telling them you’re planning either to do your own start up or to move abroad, your friends and family may, after a stunned pause, back up and look you over as for the first time, blurt out something like “Are you crazy?” and then follow that by a torrent of reasons why you’re wrong, you shouldn’t do it, it’s too risky, etc.

It’s not that those who get involved in entrepreneurship or moving abroad are necessarily any less aware of the risks; it’s just that they don’t let fear direct their lives.

You are forced to learn.

People who go to the same job day after day aren’t very often forced  to learn anything new.  Alternatively, entrepreneurs are forced to learn because they encounter new or unanticipated situations all the time, and when they do, in order to be successful, they first need to understand them.  They have no choice but to learn, because if they don’t, they will fail.

It’s similar with moving abroad.  When doing so, you will be confronted with many more new situations in which it will be much better for you learn than to refuse to do so.  You may learn portions of a new culture and a new language, or just a new way to interact with people who have different experiences than you.  The more you do, the more successful you’ll be.

It’s more interesting, you will have experiences you never would have had otherwise, and you will have more opportunities for growth.

Upon moving abroad, when you see more new things and new people and experience more new cultures than you would have otherwise, if you choose to, you can challenge yourself and change your (probably ill-informed) existing biases.  You have more opportunities not only for intellectual growth, but also for emotional and psychological growth, and with time, even wisdom.

You will experience more intense emotions.

Compared to going to your same office job every day, running a start-up can be a roller-coaster ride of emotions, from the elation that comes with triumph, to significant concern bordering on depression and then back up again.  It also has higher highs and lower lows.  It’s the same for moving abroad.  The reason is that, in both cases, the stakes are higher and the consequences more significant, and you never know how things will turn out… until they do.

You won’t have the resources you’re accustomed to having.

Guess what?  When you run your own startup, especially at the beginning, no one will provide you with ready accounting help, an IT Department, and a whole panoply of other support.  You’re it.  You will have no choice but to learn new skills and be much more self-reliant and self-sufficient.

The same can be true with moving to most parts of Mexico, but just for everyday living.  The power will go out more often, as will the Internet.  Your phone may drop calls right in the middle.  You will find instances when the road signs aren’t marked, or the streets aren’t maintained or go through or there is a cow blocking your way.  Sometimes the repair guy will show up to fix your water or gas leak on time and sometimes he won’t.

In both cases, you will have to be much more resourceful than you would be otherwise.  If you can see the benefit of dealing with and overcoming this and as a result becoming more flexible and resourceful, you’ll do very well either running a startup or moving to Mexico, because you’ll have lots of opportunities.  If not, well…

You can spend your time working with things that interest you.

When you start your own business, you will probably start it in a field in which you have an interest or even a passion.  It’s the same for moving abroad.  Because when moving abroad you start with a blank slate (much like starting your own business), you get to choose where you will live according to what place most suits your desires.  You decide; not others.

You join an elite and interesting group.

Jet Metier plays the violin at a quincinera

You have to work harder, you will be challenged, and it will be worth it.

Of course, it’s a lot easier to just go to work every day in the same way, and it is also easier just to live in the same place and do the same things every day.  In contrast, when you overcome the challenges of entrepreneurship or moving abroad, you will not only have developed new skills, but you will also have proven to yourself that you can develop new skills, which enhances the confidence you will need to try yet another new skill, which when you accomplish it, continues this virtuous cycle.

You can be the master of your own destiny.

One of the reasons people start companies is that they want to be the master of their own destiny.  And, when they define how and when and at what they will work, they can arrange their days around their own priorities.  Want to spend more time with your spouse / family?  You can do so; just work at night and don’t commute.  Want to work in your pajamas as you talk with clients over the phone?  Who can stop you?

It’s the same with moving abroad. You no longer have to stay where you just happen to be, which enables you to choose another place; something more in line with your desires, rather than a geographical accident of birth.  Beach or mountains, city or country, modern or provincial.   You choose.

In then in the end, it is extremely rewarding.

Whether you start or run a new venture or move abroad, you have a chance to chart your own course, to do something significant, to do something differently and in the way you choose to do it as opposed to how others would define it for you, and to become a greater person than you would have if you would have just gone to your desk job or stayed at home.

And there are very few accomplishments better than that.