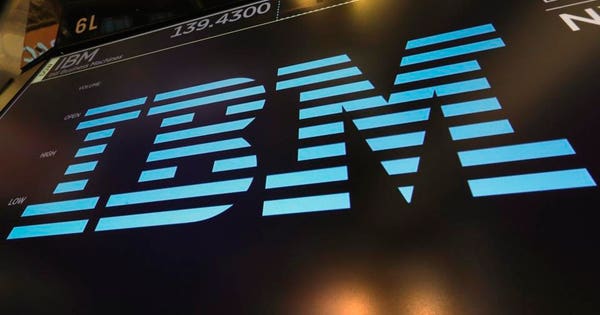 IBM is catching up with fast growing technology companies Microsoft and Amazon, recently. On Wall Street, that is. IBM’s shares have gained 34.80% YTD, compared to 35.58% of Microsoft and 30.80% of Amazon—see Chart.

All three companies have outperformed the overall market.

That’s a big change from previous years when IBM underperformed Microsoft and Amazon.

What’s behind IBM’s big comeback on Wall Street? A change in company’s fundamentals.

For years, the company has been under “creative destruction” — shedding mature low-margin technology businesses and replacing them with emerging high-margin businesses.

That’s usually a slow and painful process. Things get worse before they get better, as the new businesses do not grow fast enough to make it up for the lost revenue and profits in the old businesses.

IBM’s creative destruction exemplified this process, as evidenced by the company’s long decline in revenues and gross margins—see Charts.

Wall Street watched anxiously, valuing IBM as a technology company in the mature hardware business, characterized by sluggish sales and price and profit erosion. And it shunned the company’s stock.

More recently, things have changed.  IBM is a new company deriving the majority of its revenues from fast growing businesses. Like cloud, Internet security, and Global Services. In the most recent quarter, for instance, the Cloud and Cognitive Software segment grew 5 percent adjusting for currency, led by cloud and data platforms.

And things are expected to get even better in 3Q when Red Hat’s revenue will be added to this segment. The cognitive applications area had strong growth in the integrated security and software portfolio.

Meanwhile, the company experienced strong growth in its Global Business Services unit, with revenues up for the fourth straight quarter to $4.2 billion.

That’s an area in which IBM continues to de-emphasize lower-margin services work and focus more on shorter, higher value (and higher-profit) services engagements.

Financial numbers are beginning to look better. In the most recent quarter, IBM reported EPS – $3.17, well ahead of consensus at $3.07. Revenue – $19.2 billion met consensus revenue (Refinitiv, FactSet, Bloomberg and CapitalIQ all round it to $19.2B). Gross profit margin of 47.4% beat consensus of 46.4, a YTY increase of 100 basis points.

That’s the third straight quarter of gross margin increases and the largest YTY increase in gross profit margin in more than 5 years.

All that is music in the ears of Wall Street, which has sent the company’s shares sharply higher, following the earnings report.

Analysts had a few kind words to say. “Growth in All the Right Places,” said Katy Huberty of Morgan Stanley. “Cloud & Cognitive Software growth accelerated, contributing to a gross margin beat in the quarter while GBS continued its recent positive trajectory.

“We remain positive on IBM as the Red Hat acquisition is a landmark shift in strategy, in our view, bringing together the platform, incumbency, and expertise necessary to help customers modernize the ~80% of applications that have yet to migrate to the public cloud,” said  Credit Suisse’s Matt Cabral.

Not everyone has been impressed with IBM’s recent earnings report, however. Clement Thibault, Senior Analyst at global financial markets platform Investing.com, is one of them. ”The latest earnings report hasn’t changed much for me, even though IBM beat expectations and reported cloud growth,” says Thibault.

He still thinks that IBM is behind the competition in fast growing areas like the cloud. “Investors are optimistic, but realistically, IBM is a decade behind Amazon and Microsoft when it comes to its cloud offering, which is the main growth engine of both of these companies,” he adds.

And that will determine whether IBM will continue catching up with Microsoft and Amazon on Wall Street or fall behind, once again.