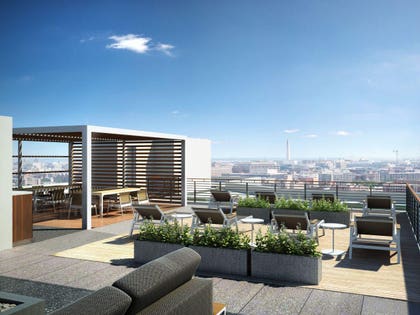 The view from the rooftop at Ora Apartments, one of a number of multifamily buildings that have been added to the selection of residences in D.C.’s Kalorama

There’s a secluded spot in Washington, D.C. where the American business and political elite have crossed paths for generations. It’s a quiet, serene place where you might eye Barack Obama swishing threes in a pickup game of hoops. It’s a place you might spy Jeff Bezos overseeing renovation work on his home. It’s a place you definitely could glimpse any number of stately homes worth an average of $3.5 million or more. And it’s a place where there has traditionally existed a definitive dearth of multifamily residential buildings.

For the first time in its 312-year history, the Washington, D.C. nook called Kalorama is witnessing development of luxury apartment buildings with long lists of today’s most sought-after features and amenities. These buildings are sprouting right alongside the enclave’s historic single-family homes. That means a home address in Kalorama can be an entirely attainable goal for the first time in many would-be residents’ lifetimes.

Observers believe a combination of factors are at work. The first is Kalorama’s long-established cache and prominence, a second the expanding District of Columbia populace, which has grown 7.5 % since 2010. One of the most plausible explanations is the surge in commuters traveling to D.C. via Amtrak’s high-speed Acela service linking Boston to the nation’s capital, with stops in Baltimore, Philadelphia and New York City. Developers believe passengers seeking a reprieve from their three-hour one-way commutes will gladly pay handsomely for plush pads in Kalorama.

“Over the years row homes, condos and now rentals have emerged,” she added. “As more people move to D.C. and as dignitaries make headlines for settling in Kalorama, there has been a change in attitude toward multifamily residing in the illustrious neighborhood. . . An address in Kalorama is viewed as a status symbol, and developers are finding that this reputation is fueling interest among a different set of buyers and renters. New luxury offerings have launched to capture this audience.”

Land for new construction in Kalorama is very difficult to come by, making launching a new residential offering difficult regardless of luxury level. So says Tracey Appelbaum of BedRock Real Estate Partners, which undertook a gut interior rehab along with façade enhancements of an older building to create Ora Apartments.

“As for renovation projects, we have found many of the area’s older buildings have been in the same hands for decades with very little reinvestment in the buildings themselves. It is particularly complicated to renovate occupied buildings. [That] leaves little opportunity for upgrades beyond the basics.”

“Based on decades of apartment experience, we believed that there would be demand for a luxury product in this submarket,” Appelbaum says. “And having just launched leasing a couple weeks ago, we are excited to report that we’ve already signed up many new residents.”

It looks like Kalorama’s days as a solely single-family community are gone for good.

“Given the success of these projects, it’s anticipated that more multifamily developers will enter the market with plans to launch luxury rentals and condos,” Leonard said. “One thing that is for sure is that the neighborhood will always be purely residential. It’s cultivated an amazing community feel that puts neighbors first and politics and partisanship aside.”

Bill Gates says no country ‘gets an A’ for its Covid pandemic response—including the U.S.
You Shouldn’t Always Delay IRA Distributions
Stocks making the biggest moves after hours: Microsoft, Texas Instruments, Capital One & more
High Housing Costs Drove Relocation For A Record 25% Of Home Buyers At The End Of 2022
Aramco-backed fintech opens bank branch in London to help Muslims invest