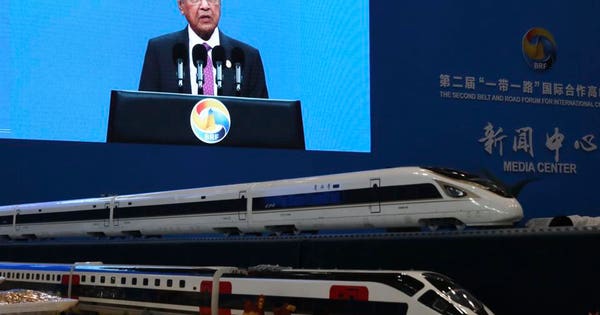 Malaysia’s Prime Minister Mahathir bin Mohamad is standing up to China, at home and at sea. The South China Sea, that is.

That raises geopolitical risks for financial markets in the region.

At home, Malaysia has dared to do something Sri Lanka, Pakistan, The Maldives and the Philippines didn’t: canceling or re-negotiating inflated Chinese projects.

This week, Malaysia seized more than 1 billion ringgit ($243.5 million) from a bank account of state-owned China Petroleum Pipeline Engineering (CPP) over failed pipeline projects, according to a Reuters report.

And back in April, China agreed to trim the cost of East Coast Rail Link project by one-third.

The East Coast Rail is one of scores of China’s infrastructure projects around the world – a bid to write the next chapter of globalization and advance Beijing’s geopolitical agenda.

Malaysia’s policies towards China have also shifted in another front, the South China Sea.

Abandoning the “Mahathir Doctrine,” which asserts that the way to ensure peace in the South China Sea is to keep the disputed area’s sea free of warships, Malaysia has been flexing its missile capabilities.

The Royal Malaysian Navy (RMN) conducted a rare show of its missile power near the disputed maritime region on 15 July as part of large-scale military drills known as Exercise ‘Kerismas’ and Exercise ‘Taming Sari’, against the backdrop of fresh tensions in the South China Sea.

Malaysia’s move comes a few days after Vietnam sent its own ships to confront Chinese ships in disputed areas. Vietnam has also been pushing for a pact that will outlaw many of China’s ongoing activities in the South China Se — like the building of artificial islands, blockades and offensive weaponry such as missile deployments; and the Air Defense Identification Zone, a conduct code China initiated back in 2013.

Still, Malaysia’s revolt against China may not last long, as its economy is already too integrated with China’s China is Malaysia’s largest export market, and that makes Kuala Lumpur dependent on Beijing for its growth.