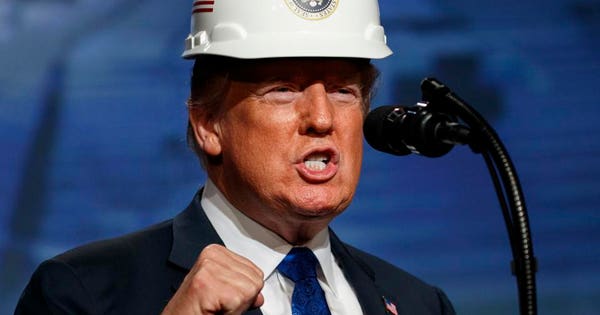 President Donald Trump pumps his fist after putting on a hard hat given to him before speaking to the National Electrical Contractors Association Convention at the Pennsylvania Convention Center, Tuesday, Oct. 2, 2018, in Philadelphia. (AP Photo/Evan Vucci)

Low state tax rates appear to be driving faster job growth since President Trump signed the Tax Cuts and Jobs Act of 2017 into law in December of that year. The law limited state and local tax (SALT) deductions for individual income tax filers who itemized to $10,000 per household, having the economic effect of increasing the advantage held by low-tax states in attracting investment.

Since the law’s passage, politicians in high tax states such as California, New York and New Jersey have bitterly complained about the change to the tax code that allowed their higher income taxpayers to deduct their large state and local tax bills from their federal taxes.

Rather than seek to cut their own high tax rates, New York, New Jersey and Connecticut filed a lawsuit against the Trump administration this week, seeking to overturn new Internal Revenue Service rules that quash attempts by high-tax states to use creative accounting to allow their wealthier taxpayers to continue to be able to deduct large state and local tax bills.

Of the ten states seeing the highest private sector payroll growth since December 2017, only one, Oregon, was among the 23 high-tax states. Oregon doesn’t have a state sales tax. The average itemized deduction for Oregon federal tax filers was $12,853, just under the high-tax state average of $12,985. New York filers claimed the highest average SALT deduction, $21,779. New York’s private sector payrolls grew by 1.8% in the period. The table below displays the top ten best states for private sector job growth from December 2017 to June 2019.

Due to the tax cuts, about 500,000 jobs were created in low-tax states that might have otherwise gone to high-tax states, the result of a shift in about $85 billion in available capital to invest among taxpayers in low-tax states.

Texas has added the largest number of jobs in the private sector since the tax cuts, 444,700, amounting to 14.3% of all the jobs created in America since December 2017. Texas has 8.8% of the nation’s population.