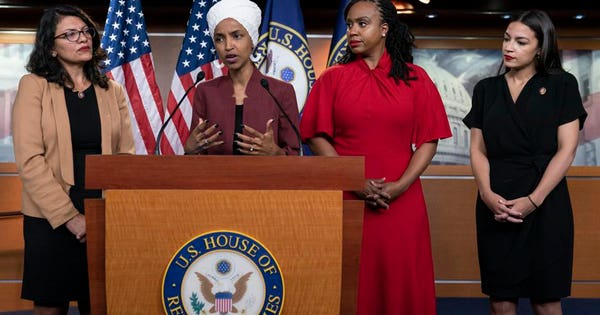 At a recent rally in North Carolina, Donald Trump spewed a litany of racist lies about Congresswoman Ilhan Omar (D-M.N.), including the outrageous falsehood that she supports al-Qaeda. As he told lie after lie about her, the crowd launched into a chant of “Send her back!” Just as he did all through the 2016 election when his supporters chanted, “Lock her up,” Trump soaked up the hostility he triggered. (He later claimed that he tried to silence the chant by moving on with his lies about Omar, but the recording of the rally proves this is just one more of his lies.)

The chanting was the culmination of racist tweets and Rose Garden attacks against Omar, as well as her colleagues Congresswomen Alexandria Ocasio Cortez (D-N.Y.), Rashida Tlaib (D-M.N.) and Ayanna Pressley (D-M.A.). Trump’s incitement has resulted in a spike in death threats not just to Omar, her colleagues, and their families but also to organizations fighting for the civil rights of Muslim Americans.

This presidential incitement to violence is shameful. Vice President Joe Biden and other have compared Trump to George Wallace, who ran an openly racist campaign for president in the 1960s and 1970s. But Trump is actually much worse. Wallace was a fringe candidate who never came close to winning. In stark contrast, Trump is sitting in the Oval Office.

Trump’s longstanding and well documented racism, anti-Semitism, islamophobia and misogyny are divisive at home and corrosive to our image, and therefore our power, abroad. Trump and the rally-chanters are telling the world that America stands for hate, xenophobia, intolerance of dissent, the muzzling of a free press, and the intimidation of free speech. Trump and his followers’ image of America is in danger of replacing the image of the welcoming Statue of Liberty in the eyes of the world.

From left, U.S. Reps. Rashida Tlaib, D-Mich., Ilhan Omar, D-Minn., Ayanna Pressley, D-Mass., and Alexandria Ocasio-Cortez, D-N.Y., respond to base remarks by President Donald Trump after he called for four Democratic congresswomen of color to go back to their “broken” countries, as he exploited the nation’s glaring racial divisions once again for political gain, during a news conference at the Capitol in Washington, Monday, July 15, 2019. All four congresswomen are American citizens and three of the four were born in the U.S. Omar is the first Somali-American in Congress. (AP Photo/J. Scott Applewhite)

What is going on right now is a matter of right and wrong, far transcending policy. But the irony is that Trump’s supporters are chanting against their own economic interests.

Omar is one of the greatest champions in Congress of increasing economic security for working people. She is the lead House sponsor of the Student Debt Cancellation Act of 2019, which would wipe out all student debt. While often thought of as a young people’s issue, cancelling student debt would help people of all ages. Currently, three million seniors are burdened by student loan debt. Many are having their hard-earned Social Security benefits garnished by the federal government as a result of going back to school or wanting to help their children achieve the American Dream.

Omar and her colleagues are also champions of expanding Medicare to cover long-term care, which is bankrupting too many seniors and their families. She is a champion of adding vision, hearing, and dental services to Medicare, as well as ending all co-pays, deductibles and premiums. And for those not yet age 65, she is a champion of extending this improved Medicare to all of us.

Omar and the other Congresswomen that Trump has been attacking are also fighting to lower our drug prices. All four are co-sponsors of the Medicare Negotiation and Competitive Licensing Act of 2019, sponsored by Rep. Lloyd Doggett (D-TX), which would give Medicare the power to negotiate lower drug prices – and take away the monopolies of drug corporations that refuse to bargain in good faith.

These policies would help all of us, but particularly Trump’s supporters, who are older on average than the general population. If Trump’s supporters got their wish and sent Omar “back,” they would lose a powerful advocate for policies that would drastically improve their lives — and the lives of everyone in America. Congresswoman Omar is fighting for all of us. We must fight for her.

Bill Gates is ‘very optimistic’ about the future: ‘Better to be born 20 years from now…than any time in the past’
A Resilient Economy Faces Substantial Policy Risks
SECURE 2.0 Helps You Shift From Taxable To Tax-Free Savings— But Your Employer Must Change Retirement Plan Documents To Allow The Option
Congress Fails To Pass Key Tax Extenders, Now What?
Your 2023 Guide To Entertainment And Meal Deductions