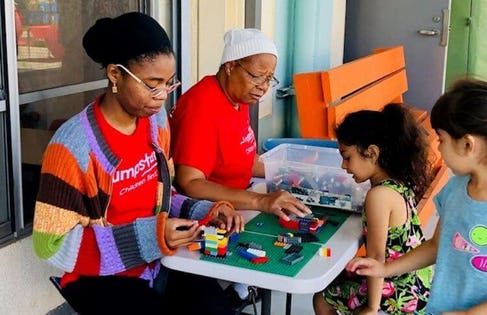 By Phyllis Segal, Next Avenue Contributor

I’ve been studying the candidates running for president, searching for ideas they have to bring us together as a nation. As a former board member of the federal Corporation for National and Community Service (which includes AmeriCorps and Senior Corps), I see national service as one of the best ways to unite people.

I’m glad to say that a number of Democratic presidential candidates this year do, too. President Donald Trump, the likely Republican candidate, said on the 2016 campaign trail that he would look into expanding national service opportunities “very seriously.” But the Fiscal Year 2020 federal budget he submitted to Congress, like the two he submitted before it, would eliminate federal funding for all national service programs.

One of the Democratic hopefuls, Mayor Pete Buttigieg, has what I think is an especially intriguing national service idea that would bring older and younger generations together. It’s one of the first pairings of “intergenerational” and “service” I’ve seen from any president or presidential candidate since John F. Kennedy encouraged older adults and young people to sign up for the Peace Corps.

Buttigieg’s ambitious New Call to Service would dramatically expand the number of opportunities for young people who want to serve in programs like AmeriCorps. Both he and Democratic candidate Rep. Seth Moulton would make national service a cabinet position. Rooted in their experiences in the military, Buttigieg and Moulton want civilian service opportunities to be available for all young people who want to serve.

Many of the Democrats’ national service plans explicitly connect service to education and job training, sometimes patterned after the GI Bill.

For example, Sen. Kirsten Gillibrand would offer every young person free tuition for two years of public or community college if they commit to one year of national service; she’d double the benefit for two years of service.

Delaney wants government to partner with companies and unions to provide infrastructure apprenticeships, with young people mastering skills while improving public parks or renovating federal buildings to make them green.

Sen. Michael Bennet, a longtime proponent of national service, has co-sponsored bipartisan legislation to exclude from federal taxation the AmeriCorps Education Award (up to $6,095 in Fiscal Year 2019).

But I think Buttigieg’s call for an Intergenerational Service Corps is the one big, breakthrough idea, because it recognizes the value of service by, and for, people of all ages.

I’ve long believed that working shoulder-to-shoulder across the generations is a way to bridge generational divides. But younger and older people serving together in teams hasn’t been the norm for national service.

AmeriCorps National Civilian Conservation Corps , for example, requires applicants to be between 18 and 24. Senior Corps programs like Foster Grandparents require applicants to be 55 or older. And even though the 2009 Serve America Act set a goal that 10 percent of AmeriCorps members would be 55 and older, this modest age integration hasn’t come to pass.

Still there are compelling local examples of intentional intergenerational service that are working well.

Many of the benefits of service by people of all ages — students, teachers and older volunteers — are well documented.

So far, Buttigieg — the youngest candidate in the race and a millennial — is the only one to talk about how service can bring the generations together.

As the election season progresses, I’ll be watching for other ideas from candidates of any political persuasion that could bring us together as a nation.

I hope you will be, too.

How to protect yourself from tax fraud and scams, according to cybersecurity experts
Biden’s student loan forgiveness plan heads to the Supreme Court. How that affects the payment pause
Showtime to combine with Paramount+, rebrand with new name
Ticketmaster braces for Beyoncé’s ‘Renaissance’ tour amid fears of Taylor Swift-level demand
Bond king Jeffrey Gundlach says he expects one more Fed rate hike