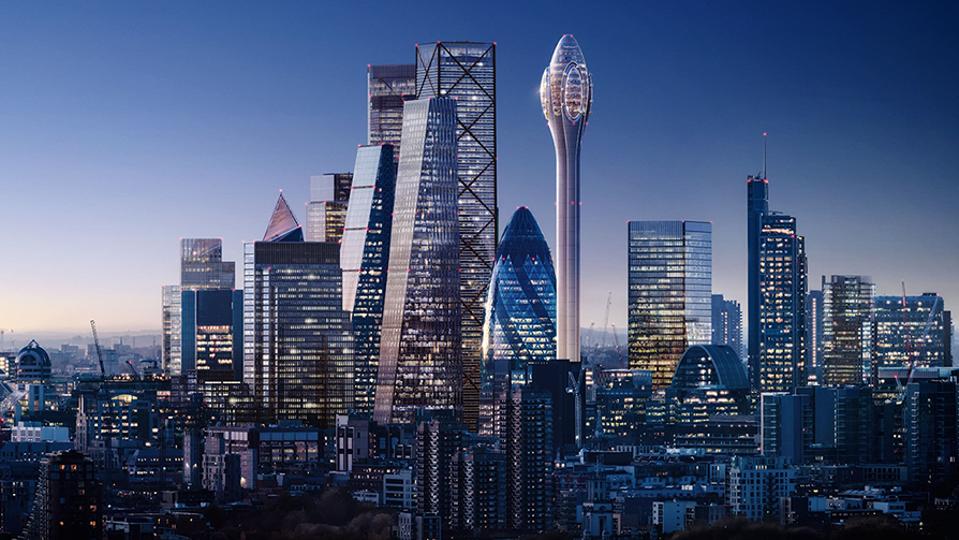 UK Prime Minister Theresa May is set to leave Downing Street in a few days’ time — marking the end of an era where news from London seemed fixed on parliamentary squabbling over Brexit, endlessly delayed negotiations with Brussels, and the UK’s ever-dawning departure from the EU. In her last TV interview with the BBC, she spoke of “a mixture of pride and disappointment” regarding her time in office, and called for the urgent need for “collective responsibility” in politics.

But as the world prepares for the announcement of the next Prime Minister on July 23 — most likely the bombastic ex-mayor of London, Boris Johnson — another disappointment has struck some of the city’s elite: the reversal of an approval for what could have been the second tallest skyscraper in Western Europe, The Tulip tower designed by Foster + Partners.

The “new public cultural and tourist attraction” was set to stand right besides The Gherkin, the ovoid skyscraper designed by the same firm, which has become an iconic landmark of the city’s modern skyline. In its proposal, The Tulip promised “significant economic and social benefits,” and a commanding 360-degree view of the city. However, its promise and eventual failure as a project have come to speak for wider issues of the time.

Tall and slender with a bulbous head stacked with viewing galleries, the design was once jovially dubbed a “monument to Brexit” by The Wall Street Journal’s City Editor in London, David Wighton, in an article for Financial News.

While the tower’s architects would recoil at such a characterization — especially considering Sir. Norman Foster’s public denunciation of Brexit and the threat it poses to the UK’s architecture industry — one can’t be blamed for entertaining the thought of a Brexit/Tulip analogy. They are, after all, two conceited projects mired by deliberation, ballots, and popular disenchantment.

The Tulip’s origins can be traced back to 2014, when Joseph Safra, the world’s wealthiest banker, made a conspicuous purchase in Central London. Soon after a $1.3 billion acquisition of Chiquita in a joint venture that year, his company, the Safra Group, bought The Gherkin skyscraper for £726 million. The sale, managed by property agents at Savills and Deloitte Real Estate, enhanced the Brazilian conglomerate’s international portfolio of office properties and set the stage for Foster + Partners to return to the premises and work for Safra on the adjacent lot.

Whether The Tulip was conceptualized as a vanity project, a chauvinistic evolution of The Gherkin, or as a generous place for Londoners and tourists to share city views—one thing was certain: there would be a price for admission at the door. A strategically poised observatory deck in a global city can produce much more revenue per square foot than traditional office space, and The Tulip would outplay any competition with 12 floors of views, an interconnecting skybridge, and dewdrop-shaped gondola pods circumnavigating the glass exterior.

In support of the application, the developers had Deloitte prepare an economic impact assessment report that estimated the project would yield approximately £1 billion (~$1.2 billion) “in total monetized value by the year 2045,” and 600 permanent full-time jobs throughout 20 years of operation. The City of London Corporation approved the 1,000ft (305m) Tulip tower in April in an 18-7 vote.

Unfortunately for the backers of the project, these figures would soon fade to the background as the design went up against simple, formal assessments of program and style in the press. Besides views, sky-bars, and restaurants — there seemed to be little else going for The Tulip.

Justin Davidson, classical music and architecture critic for New York Magazine, called the design “a thin-air pleasure dome” and self-indulging “Instagram Architecture.” Critic Catherine Slessor, writing for The Architect’s Journal, summed up the popular allusions that had been made regarding its form across social media— “but plug, cotton bud, giant sperm” — but delivered a more nuanced assessment of The Tulip as a “Victorian pleasure pier in all its huckstering, carnivalesque glory.” Peter Cook, member of the influential 1960’s firm Archigram and self-appointed delegate of British architecture, was disappointed at the lack of experimentation, characteristic of what he calls a “dull period” in English architecture.

The Tulip was judged by many as a tourist-bating scheme — literally and metaphorically detached from the street level by a thin and long elevator shaft. Its most notable public-serving function, that of a public “classroom” for schools to book for educational field-trips, came off as artificial at best. An increase of weekend traffic and tourist dollars was not enough of a social or economic benefit to justify its skyline-altering existence.

Now, just a few weeks after the initial approval, final judgment has arrived. While city councils have permission-granting powers in much of England, the City of London reserves final vetoing power to the mayor. On Monday, Sadiq Kahn, Labour Party mayor of London since 2016, exercised those powers in the London Review Panel’s response to The Tulip’s application.

Among the strategic issues outlined in Mayor Kahn’s vetoing deliberation, is the claim that the tower does “not constitute the very highest quality of design required for a tall building” in the designated location, and further, that it would cause “harm” to the city center’s historic environment. The statement echoed complaints by Duncan Wilson, Chief Executive of Historic England, who resented the tower’s potential to overshadow the medieval Tower of London.

The report ends with a damning conclusion:

“The panel is unable to support The Tulip because it does not think it represents world class architecture, it lacks sufficient quality and quantity of public open space, and its social and environmental sustainability do not match the ambition of its height and impact on London’s skyline.”

Back when David Whiton called The Tulip a “monument to Brexit” in his Financial News piece, he compared the tower’s role to that of Sir Christopher Wren’s Monument to the Great Fire of London. It’s precisely because The Tulip failed to offer sufficient public and architectural value that it risked becoming tokenized as a monument — as a representation for something else—whether it be Instagram culture, Brexit, or a disaster.

Without a function better suited to Londoners’ needs than panoramic photographs and day-trips, the tower could only come to embody a stunted time in the UK, politically and architecturally.

Katy Harris, Senior Partner at Foster + Partners, shared the firm’s official statement in response to the London Review Panel’s decision in an email:

“The Tulip Project team are disappointed by The Mayor of London’s decision to direct refusal of planning permission, particularly as The Tulip will generate immediate and longer-term socio-economic benefits to London and the UK as a whole. We will now take time to consider potential next steps for The Tulip Project.”

To propose a future in London for a tower that offers little more substance than vistas and gondola-rides is a ludicrous idea — unless one wants to build a monument to the UK as a circus.

The Future Of Economic And Workforce Development
Demand For Cold Plunge Pools Heats Up
Know The Times When An IRA Conversion Is Most Likely To Pay Off
Bed Bath & Beyond warns it can’t pay down debts, defaults on credit line
When Life Gets In The Way Of Your Retirement Plans