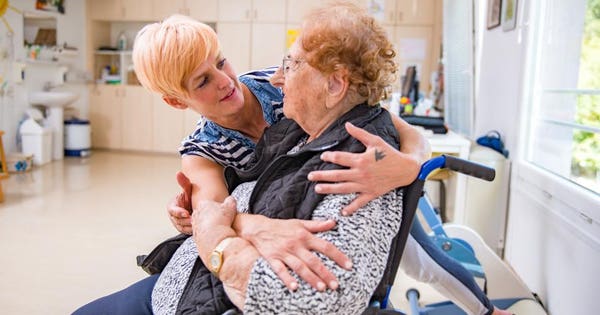 Scientists the world over are scrambling to cure Alzheimer’s. And information abounds about how we might treat or even prevent the disease to begin with. But in the interim, finding new ways to help the some 43 million Americans who are caring for sufferers is gaining steam. And in this regard, Americans might do well to take heed of a program across the ocean, that’s helping caregivers cope.

A new study from the University College London (UCL) has shown its program, that combines therapy and coping strategies for people who care for family members with dementia, actually improves the caregivers’ mental health, and that the effects can still be seen six years later.

In fact, according to the study published this month in the British Journal of Psychiatry, caregivers who took part in the program—dubbed START (STrAtegies for RelaTives)—were five times less likely to have clinically significant depression than caregivers who were not offered the therapy. In addition, the intervention has also been shown to be cost-effective in a prior study in the British Medical Journal (BMJ).

“Taking care of a family member with dementia can be immensely difficult, particularly as their condition deteriorates and they may not appreciate their carer, so close to four in 10 family carers experience depression or anxiety,” said the trial’s principal investigator, Gill Livingston, professor of Older People’s Psychiatry in the Division of Psychiatry at UCL. “We now can offer an evidence-based approach to support their mental health in the short- and long-term, which benefits both the carer and the person they’re caring for.”

Livingston said the START program is delivered by psychology graduates, trained and supervised by the research team, instead of qualified clinicians, making it easy to implement in many settings.

In the new UCL study, researchers conducted a randomized, parallel group with 260 self-identified family carers of people with dementia. The caregivers either participated in an eight-session manual-based coping intervention delivered by supervised psychology graduates (START), or were part of a control group who did not receive the intervention. Over 72 months, the START group had less anxiety and depression, evidenced by their improved scores on the HADS-T (Hospital Anxiety and Depression Scale). (Developed in 1983, the fourteen-item scales is used by doctors to determine the levels of anxiety and depression that a person is experiencing.)

Livingston and his colleagues concluded that not only is the START program clinically effective for benefiting caregivers, but that the effect lasts for 6 years without increasing costs. “This is the first intervention with such a long-term clinical and possible economic benefit and has potential to make a difference to individual carers,” the authors wrote.

Those delivering the therapy work with carers within the START program to develop coping strategies, supporting them to manage their own well-being in the long run without needing further therapy sessions. In addition, the eight sessions emphasized planning for the future and accessing further support if needed.

“Six years after receiving the therapy, the carers who were in the START program had significantly fewer symptoms of depression and anxiety, and the researchers say the therapy program appeared to be both preventative and improve existing mental ill-health,” the authors wrote.

In addition, patient-related costs were close to three times lower among the families in the START program—averaging £5,759 for those in START versus £16,964 in the control group in year six—which the researchers said is “likely due to the carers being more able to cope and provide care for their loved one.”

Researchers originally set out to assess the clinical effectiveness of the program over 6 years and the impact on costs and care home admission. And though they acknowledged that the difference of patient-related costs did not reach statistical significance, researchers say this is due to the fact that medical costs can be large and variable. Still, they reported “their results do strongly suggest the program is not only cost-effective, but could save money for healthcare services.”

“We’ve designed our program to keep costs low, and our results suggest it could actually result in cost savings in the longer term as dementia patients will have fewer costly medical problems if their family carer is healthy and supported,” Livingston said.

According to UCL, the START team has developed training manuals so that any healthcare provider could deliver the intervention anywhere in the world. The team also plans to provide accredited training at UCL in the near future. The UCL reported that the Alzheimer’s Society—the United Kingdom’s care and research charity for people with dementia and their carers—is supporting the team to explore different options for getting the intervention further implemented into practice as well as providing funding to make cultural adaptations to widen access to minority ethnic groups.

“Being a carer can be a grueling job; physically and emotionally demanding, 24 hours a day and often done purely out of love,” said James Pickett, head of research at the Alzheimer’s Society. “Unfortunately, depression and anxiety can be an inevitable side effect—with 90% of carers telling us they experience stress and anxiety several times a week. Yet, for the 700,000 carers across the UK, many receive little or no support, despite NICE guidelines recommending that they do.”

“This is a major breakthrough,” Pickett continued. “We are absolutely thrilled to see this monumental evidence that START is clinically effective at reducing depression and anxiety in carers, and that the effects can still be seen six years later. This could turn the tide for carers and we would love for it to be available to all people who care for someone with dementia.”

As part of the START Implementation Project (2017-2020), the Psychiatry department at UCL wants to collaborate with academic and clinical centers interested in translating and validating the use of START in different languages, settings and disease groups and asks those interested to contact them.

In the U.S., the National Family Caregiver Support Program (NFCSP) provides grants to states and territories, based on their share of the population age 70 and over, to fund various supports that help family and informal caregivers care for older adults in their homes for as long as possible.

Part of the Administration for Community Living under the auspices of United States Department of Health and Human Services (HHS), the NFCSP grantees provide five types of services:

The ACL also administers the Alzheimer’s Disease Supportive Services Program (ADSSP). This program, began in 1992, includes a series of grants which support state efforts to expand the availability of community-level supportive services to persons with Alzheimer’s disease and related disorders (ADRD) and their caregivers.

According to Alzheimers.net, nearly 44 million people worldwide have Alzheimer’s or a related dementia, yet only 1-in-4 people with Alzheimer’s disease have been diagnosed. In 2016, 15.9 million family caregivers provided an estimated 18.2 billion hours and $230 billion in care costs to people with dementia. “In 2017, Alzheimer’s cost the United States $259 billion. By 2050, costs associated with dementia could be as much as $1.1 trillion. The global cost of Alzheimer’s and dementia is estimated to be $605 billion, which is equivalent to 1% of the entire world’s gross domestic product.”