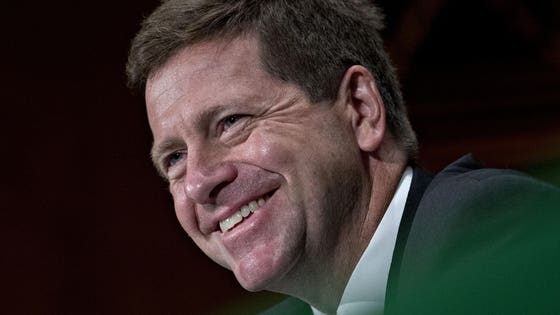 Securities and Exchange Commission Chairman Jay Clayton said today it won’t be known for five or 10 years whether his effort to allow more retail investors to put their money into early stage, high growth companies is working.

“Hopefully we’re on the right path. I’m very much focused on getting companies to go public and stay public,” said Clayton who has make the objective a high priority in his two-year tenure at the helm of the SEC.

His comments came during and immediately after his participation in a forum on corporate governance before the U.S. Chamber of Commerce Center for Capital Markets Competitiveness.

During the session, Clayton said the SEC needs to guard against imposing corporate disclosure requirements that tell companies how to run their businesses.

As an example, SEC Corporation Finance Director Bill Hinman said having limits on stock buybacks would be wrong.

He asserted it is not the SEC’s role to direct firms on how to make their capital allocations.

Looking at the 2019 proxy season, Hinman said ESG (environment, social and governance) was the most frequent issues on proxies with executive compensation as number two.

Clayton said the process of getting issues on the proxy needs to be revised. He noted some parts haven’t been updated since 1954.

He added he is worried that proxy advisors who are making decisions for asset managers may not be putting the best interests of the underlying investors enough in the votes on issues at corporate annual meetings.

On another issue, Clayton said the SEC needs to make a greater effort to get African-Americans and Hispanics in the agency.

When asked if the SEC has any roundtables planned for the rest of the year beyond Thursday’s session on short-termism, the SEC chief responded: “I don’t know if I need another roundtable. I’ve got a lot of work to do.”

Almost half of Americans think we’re already in a recession. Here’s how to prepare if they’re right
Luxury retailer LVMH is optimistic as it sees Chinese shoppers and tourists returning
Stocks making the biggest moves after hours: Intel, Visa, Hasbro and more
Stocks making the biggest moves midday: Sunrun, U.S. Bancorp, Alphabet, AT&T and more
Crypto exchange Gemini lays off 10% of workforce in its latest round of cuts