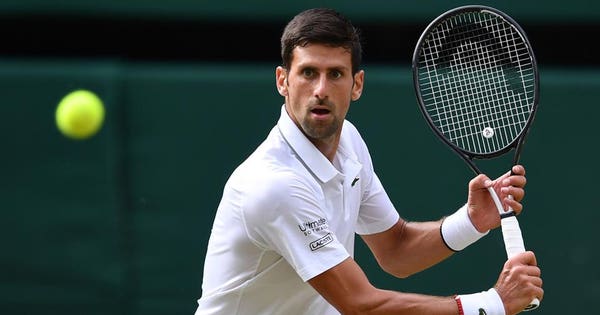 The 16-time Grand Slam champion enjoys a high-society lifestyle from his hillside Monte Carlo mansion all the way down to the celebrated waterfront. He also owns a modern Miami Beach villa in the sky at Eighty Seven Park, a new beachfront landmark. And if you count a deuce of SoHo condos at 565 Broome in New York, he’s got real estate game. Advantage Djokovic.

Eighty Seven Park towers over the beach and two parks.

Miami’s cosmopolitan paradise of large harbors, mega yachts, culture, fashion, celebrities, and lower taxes fits Djokovic’s lifestyle to a T. “The Djoker” is famously social—court-side clowning, fan mingling, chatting with restauranteurs, yachting with friends, and cruising the streets in luxury cars. His sense of humor is infectious. A vegan, he even entertains Wimbledon crowds by eating the grass. He’s the life of any party. So Miami is a calling.

Novak Djokovic on the beach in Miami. (Clive Brunskill/Getty Images)

Djokovic’s villa has panoramic vistas from a 25-foot wrap-around balcony.

Located in North Beach, the condo is one of 70 exclusive units at Eighty Seven Park (ranging from 1,400 to 7,000 square feet). Pritzker Prize-winning architect Renzo Piano’s first U.S. residential building is a glass tower floating above the trees, adjacent to the sprawling 35-acre North Shore Park.

From the spacious, contemporary kitchen, Djokovic (a vegan restaurant owner and nutrition book author) cooks gluten-free meals with premium appliances and a long island amid built-in cabinets. On rare off days, he can indulge in the fitness center or underground spa with hammam, sauna and steam room, ensuring that his grand lifestyle stays on serve.

The Serbian-born superstar has a “key to the park,” giving him special residents-only access to a private north-side gated park designed by West 8, the Dutch landscape firm behind the transformation of Governor’s Island in New York.

“I was inspired by the unmatched level of service, exclusive park access, in-house botanist, and panoramic views of both land and sea,” said Djokovic. “It all provides the perfect lifestyle for me and my family.”

Djokovic also invested in two units at another Renzo Piano-designed condominium—the gleaming, twin towers at 565 Broome SoHo in New York (another yacht harbor city). At this Euro-style, 30-story condominium (crafted from stone, white oak wood, glass, and concrete), the tennis star has a U.S. Open base of operation.

565 Broome has a boutique European ambiance.

After a well-earned fifth Wimbledon title, Djokovic is overdue for some rest and relaxation—in a pool, sauna, yacht, Monaco, Miami or New York.

Be Aware Now: Here’s Where SECURE 2.0 May Hand You Unexpected Benefits
This Social Security change would be ‘easiest and quickest,’ Manchin says. What debt ceiling negotiations may mean for benefits
Levi Strauss beats estimates, offers upbeat guidance for fiscal year
The first ETF is 30 years old this week. It launched a revolution in low-cost investing
Hate fast fashion? You can compost this new streetwear clothing line