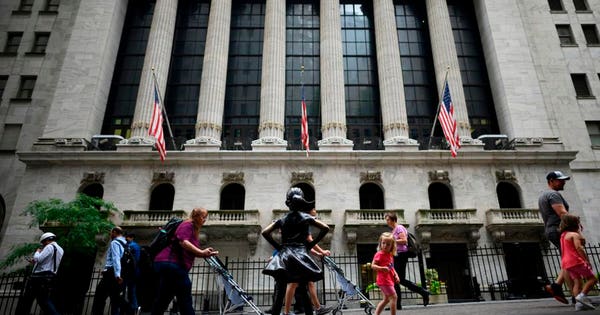 The stock market has had a good run this year, although there has been one worrying spell as the weather warmed. From the look of things so far, is the old maxim is wrong, that summer is a bad time for equities? Well,  perhaps the current rally is due to one-off circumstance, and a baleful pattern will kick in. This year, May had a slide that turned around lately amid another seeming thaw in the trade conflict and expectations for a Federal Reserve rate cut. But we have two and a half months of summer to go. So how do we plan? For answers, we turn to the Investment Coach himself, Lewis Walker, a financial planning and investment strategist at Capital Insight Group in Peachtree Corners, Ga.

Larry Light: So does warm weather always equal cold stocks? What does history teach us?

Lewis Walker: This year summer officially extends from June 21 to Sept. 23, when the fall solstice arrives. There’s an old adage about warm weather doldrums on Wall Street that counsels, “Sell in May and go away.”

Per Investopedia, the phrase is based on an old English saying, “Sell in May and go away and come back on St. Leger’s Day.” During London’s hot summer months, merchants, bankers and aristocrats would decamp to the country and the shore, with a slump in trading and investment activity. St. Leger’s Day referred to the St. Leger’s Stakes, a major mid-September horse race, the last leg of the British Triple Crown, when all were back, and business activity accelerated.

For years, Wall Street traders and bankers were said to abandon hot and stuffy New York City for the Hampton beaches of Long Island or the cooler Catskill Mountains of upstate New York. The idea that lower trading volumes with lackluster performance could increase risk suggested selling out, parking proceeds in cash for safety, and buying back in the fall. Obviously, the adage ignores taxes and the cost of buying and selling.

Light: Is the concept valid?

Walker: It used to be. From roughly 1950 to about 2013, the Dow average posted lower returns May to October compared with November to April. But since 2013, seasonal patterns have not held up and those who sold in May generally missed out on significant upticks in markets.

Light: Why the change?

Walker: Air conditioning and laptops for one thing. You can be cool in your office, car, home or vacation condo, no matter where you are. No longer must you call a broker to get market information or place a trade. Information is ubiquitous and trading cheap. Sadly, market participation is down. A 2017 Gallup poll showed that only 54% of American households owned stocks, compared to 62% before the financial crisis. Those who did jump in post-crisis or held on have experienced the strongest bull market recovery in history.

Walker: That’s right. There’s another factor related to a long-term investment horizon. A Feb. 8 nytimes.com story indicated “84% of all stocks owned by Americans belong to the wealthiest 10% of households. That includes everyone’s stakes in pension plans, 401(k)s and IRAs, as well as trust funds, mutual funds, and college savings programs like 529 plans.” Much of those funds are monitored by professional managers with 24/7 oversight, reducing seasonal patterns.

The S&P 500 Index hit an all-time high on June 20, 2019, a strong comeback from the fourth quarter 2018 slump. In a world of instant information and high-speed computers, trying to out-guess and front run even tiny trends, successful market timing is all but impossible.

Light: Lord knows things can change, yet right now there doesn’t seem to be a recession on the horizon.

Walker: Most bear markets in the past have been caused to some extent by an energy crisis, or Federal Reserve action to increase interest rates to choke off runaway inflation. Inflation remains relatively benign and interest rates are persistently low, providing little competition for stocks, especially reliable dividend payers.

The benchmark 10-year U.S. Treasury note, which tends to reflect Federal Reserve policy and investor expectations, fell below 2% on June 21, and European yields are even lower. Dropping bond yields could indicate that investors smell recession, but that theory is suspect given the S&P 500’s record high, with the Dow average a hair below its all-time high of last October.

Mortgage rates have dropped with banks advertising 15-year loans in the 3.1% range, 30-year loans around 3.5%. Low rates are stimulating building and refinancing activity. With America now the world’s largest oil producer, we’re no longer hostage to Middle Eastern and OPEC turmoil. We won’t be repeating the gas line shortages of 1973 and 1979 anytime soon. Plus, vehicles are far more fuel efficient than they were 40 years ago.

Light: What’s your message to those who want to ditch stocks during the warm months?

Walker: Your investment policy should be driven by a long-range plan, not fear and emotion. Build a solid and safe “what if?” fund to get past periodic and largely unpredictable market slumps. Retirees or the “about to be retired’ should have a three- to five-year “paycheck fund” in federally insured savings along with perhaps some shorter-term or laddered bond holdings. A good dividend flow should be part of retirement funding strategies.

Those with long-term wealth building horizons should stay invested, taking advantage of dollar-cost-averaging to grow retirement and college savings funds. “Go away in May,” or in June, July or August, should refer to vacation plans, not market timing strategies

Roughly 70% of taxpayers are eligible for IRS Free File, but only 2% used it in 2022
African-Americans And Latinos Forced To Rely More Heavily On Family And Friends To Handle Financial Shocks
Social Security, Medicare should be ‘off the table’ in debt ceiling talks, McCarthy says
More On The Fair Tax Act Of 2023
After a tough year for crypto, here’s how to handle losses on your tax return