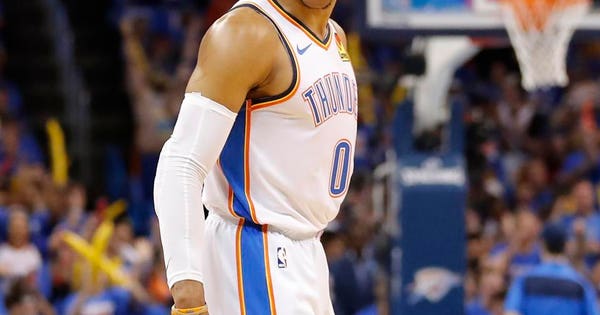 Russell Westbrook has to be thrilled with is tax-savings “payday”. (AP Photo/Alonzo Adams)

The NBA offseason has left every other league in the dust with its drama. As if the first week and a half were not crazy enough, Thursday night the Oklahoma City Thunder traded 2017 MVP Russell Westbrook to the Houston Rockets for Chris Paul and a handful of draft picks.

While Westbrook changing cities was fully expected, Paul moving in the same trade was not. And while OKC has become the Pittsburgh Pirates of the NBA, the Rockets appear to by trying to reassemble the OKC team that was almost good enough to win a title.

The tax winner in this trade is clearly Russell Westbrook. The loser? The Oklahoma Department of Revenue. After having lost Paul George’s income to California, Westbrook will now relocate his home to Houston and enjoy some state-income-tax-free living.

But that is not where the savings end. Forbes estimates that Westbrook earns $18,000,000 a year in endorsement income. Shifting that income from Oklahoma to Texas saves him $900,000 a year in state taxes. And assuming Westbrook has accumulated an investment portfolio over his time in the NBA, he will shift interest, dividend and capital gain income from Oklahoma to Texas as well.

All told, Westbrook will save about $10,000,000 in state income taxes over the next four years.

But what about Chris Paul? Oklahoma will make some money off the three years remaining on his max contract, right? Well…Adrian Wojnarowski reports that Paul will be immediately moved to another team, which would leave Oklahoma City without a max contract player as they rebuild.

One team Wojnarowski is reporting Paul could be traded to is the Miami Heat. If that is the case, Paul could end up a winner as well, saving about $100,000 a year on road game taxes.

The state of Oklahoma’s greatest enemy can no longer be the Texas Longhorns. It must be Kawhi Leonard, whose recruitment of Paul George (after former Longhorn and Thunder player Kevin Durant turned him down) to the Clippers, set this whole series of events in motion.

Ask Larry: Is There A Good Reason For My Wife To Wait Till Her FRA To Take Social Security?
Luxury brand Six Senses is opening its first hotel in Australia
One of Jeff Bezos’ secrets to success: The boss should always talk last in meetings
More than half of all ‘Avatar: The Way of Water’ tickets have been for 3D showings
4.5-Acre Oceanfront Maui Property Hits The Market For $5.5 Million