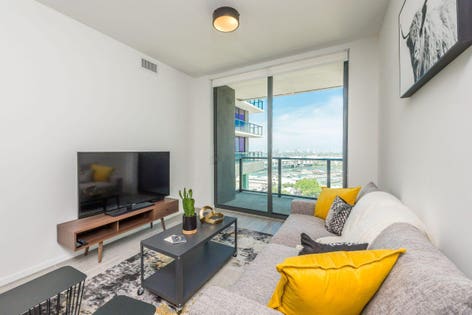 X Miami is among urban properties offering very small residences to those who seek an urban existence at lower cost.

A study by the Urban Land Institute Multifamily Housing Council found the majority of micro-unit dwellers are professionals 30 or younger, with most of these under the age of 27. Micro units are more popular with males than females. Residents are most often first-time renters who haven’t acquired loads of furnishings and clothing, and don’t need as much living space and/or closets. Micro unit residents often see their bitsy abodes as launch pads for their new careers, as well as for lives spent out in bistros and other gathering spots rather than home. Most transition within two years to larger units.

The Urban Land Institute study learned the definition of micro unit differs depending on the city in which they’re found. For instance, in New York City a micro unit might measure 300 square feet, but in Dallas 500 square feet. Efficiency is perhaps the best descriptive word for the units. They often feature flexible furniture systems, moveable kitchen islands, built-in storage, gadget walls and high ceilings. The buildings in which the smaller units exist are often notable for a wide array of services and amenities.

The three key factors in any residential choice are location, location, location, and nowhere is that truer than with micro units. Virtually all respondents in the Urban Land Institute study termed location the key priority in their leasing Lilliputian lodgings. Those settings tend to be near work and/or public transit, exceptionally pedestrian-friendly, and in authentically urban and highly desirable or trendy enclaves.

A case in point is The RIDE at RiNo in Denver. There, the 393-square-foot Marquette and 369-square-foot Keystone both limbo in under a tidy 400 square feet. But the renters in these and other very small apartments are able to step outside into an ultra-popular enclave steps from light rail, employment hubs, craft breweries and nightlife.

Of course, price is a big determinant in attracting renters to micro units. Monthly rental rates 20 to 30 percent lower than conventional apartments can mean living in a coveted downtown district close to everything, as opposed to a backwater. It can also translate into the freedom of living alone as opposed to the challenges of life with a roommate.

In Miami, the development called X Miami invites renters to participate in the Rent-by-Bedroom program, in which each garners a private bedroom and bathroom starting in the $1300s. The units start at 400 square feet, and feature floor-to-ceiling windows, expansive balconies, built-in closets, Nest thermostats and Alexa smart controls.

Developers face a mixed bag in creating buildings with micro units. Such residences are more costly to develop and operate. But premiums per square foot more than compensate. To hedge their bets, some developers cleverly designed micro units to allow adjacent units to be combined into larger studio or one-bedroom apartments.

The micro unit concept is also available in condominium versions. For instance, YOTELPAD Miami’s miniature residences, created by YOTEL, begin at 417 square feet, at prices starting in the $300,000s. That attainable price point is providing opportunity to investors who’ve long hoped to get into the booming business of South Florida short-term rentals, and has enabled the developer of YOTELPAD to outsell other projects in its area.