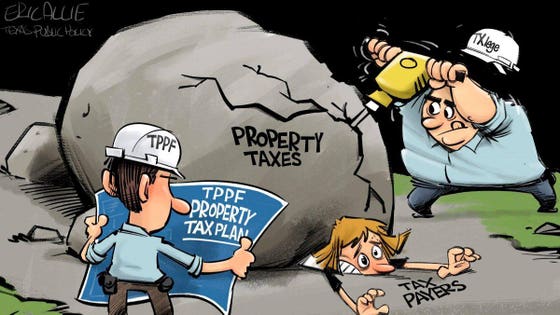 The Texas Legislature Reformed Property Taxes During the 2019 Legislative Session

The government-appraised value of my home was due to go up 10.7% this year, which, if the tax rates for the school district, county and other taxing public entities held steady, would mean a tax hike of hundreds of dollars.

In the eight years I’ve lived in Texas since moving from California, this was the largest appraisal increase yet—they’d averaged 4.8% in the previous five years. While California has high income taxes and sales taxes, its property taxes are held down by Proposition 13, passed in 1978, which limits the annual increases in a home’s assessed value to 2% per year based on the sales price of the property. The tax rates are limited as well, generally to 1% of the property’s value.

While Texas state government has done a decent job over the years in limiting spending growth to around population and inflation, especially compared to other states, this hasn’t been the case at the local level. Local governments in Texas—counties, cities, school districts and some others like municipal utility districts and hospital districts—raise and spend more than half of government expenditures in Texas excluding federal dollars. This means local government spending habits have an outsized role in the state’s tax climate.

Local Texas government’s greater relative size led me to compare the growth in local government in the two most-populous states, the one I left and my new home. To my surprise, Lone Star local government is growing every bit as fast as its Golden State cousin, according to U.S. Census Bureau data from the most recent 10 years reported, after accounting for population and inflation.

Fortunately, if Texas property owners believe their government appraisals are too high, they can protest them—though the tiny percentage who do usually hire someone for the task. I filed a protest, received my date and time to appear, and, having taken a vacation day, trooped down to my county’s all-volunteer Appraisal Review Board.

One of the property owners who appeared before me used his allotted five minutes to complain about potholes and property taxes—forbidden topics in a proceeding to be focused solely on the presenting evidence regarding the value of your property. He became frustrated and, as he raised his voice, a peace officer was called from the waiting room to stand watch.

Even so, the man came away with a modest downward adjustment to his home’s appraisal. He wasn’t fully satisfied, but he’ll be paying a little less in property taxes and hundreds of thousands of his neighbors who didn’t protest could be paying a little more as a result.

I then presented my case, citing as evidence both past appraisal increases as well as presenting information from the real estate site Zillow as to my home’s estimated value, as well as that of other homes in my area. I suggested a 5.6% increase in value instead.

The review board members then turned to the county appraiser who immediately posted a comparable sales report for my home. He suggested an appraised value hike of 5.5%.

I thought of leaving well enough alone, but the rules allowed for a two-minute rebuttal. I asked to use my rebuttal time and I turned to the staffer from the county’s central appraisal district and asked, how is it that the county determined my home was worth 10.7% more earlier this year but, on day of the protest, with an estimate clearly made ahead of time, arrived at an appraised amount within $700 of my recommended amount?

The county civil servant launched into a detailed explanation that went something like this: the appraised amounts are set for the school district as a whole then, if anyone protests, a detailed analysis is done on that specific property.

I thought about this explanation for a moment, thanked everyone for their time, and drove home, thinking the system was working as intended.

But, as I traversed the winding country roads back to my house, I began to realize that the property tax system was indeed working as intended—but not in a good way. Rather, by dividing the property tax system in two—appraisals on one side, which can be protested, and tax rates on the other side, which can’t be, except at the ballot box for the officials who set them—the system was designed to ensure it could only be resisted rarely and with great effort. This is because those taxpayers who are most concerned about taxes are the same taxpayers who are most likely to file a protest over their property appraisals.

And since these individual property owners—and likely a large share of corporate property owners backed up by platoons of accountants and tax attorneys—frequently earn relief, they remain more or less satisfied with the system. They pay less. Their neighbors pay more. And most importantly, they lose their initiative to push for any sort of a tax rate rollback election (which required the circulation of petitions to qualify for the ballot) or challenge spendthrift local officials who keep raising property taxes.

Fortunately, Texas’ 2019 recently concluded legislative session saw the passage of Senate Bill 2 by state Sen. Paul Bettencourt (R-Houston). SB 2 limits local government to 3.5% per year annual revenue growth, excluding the value of new development, without a vote of the people. If local government want to hike spending above the 3.5% limit, they can, but there must be an approving vote. The exception is school districts, which have a limit of 2.5%.

Had this law been in place for the past decade, Texas’ local government growth would have been in line with state government—and far less than the explosive growth it has seen that put it in the same league as California.