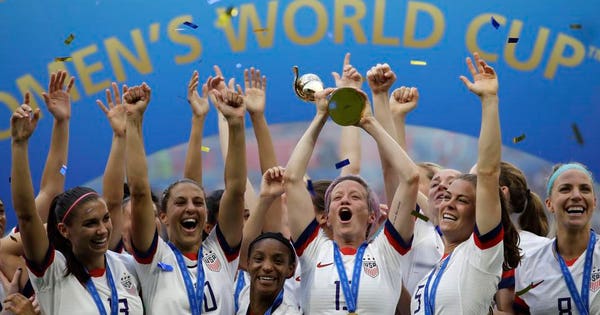 Watching the U.S. Women’s Soccer Team (or as it should be simply known henceforth, “The U.S. Soccer Team”) on its march to World Cup victory was riveting. The games were entertaining, the goals exhilarating, and the players exceptional. But the team’s remarkable fourth World Cup title also reveals an undercurrent of inequality, one that is all too familiar to women today.

United States’ Megan Rapinoe lifts up a trophy after winning the Women’s World Cup final soccer match between US and The Netherlands at the Stade de Lyon in Decines, outside Lyon, France, Sunday, July 7, 2019. (AP Photo/Alessandra Tarantino)

For inexplicable reasons, U.S. Soccer and FIFA don’t value female and male players equally. It’s as straightforward as that. By their own calculations, U.S. female players make 38 cents for every dollar their male counterparts’ earn. As defender Becky Sauerbrunn summed up, “The bottom line is simple. It is wrong for us to be paid and valued less for our work because of our gender.”

It appears like the players will make strides in the wake of their recent victory, but land far short of equality at least in the short run. And while the case of U.S. soccer provides a conspicuous and clear-cut example of injustice, the reality is that pay inequality is a pervasive issue across occupations, age, and race in the U.S.

Study after study has identified a persistent gender pay gap. A PayScale report found that women still make only $0.79 for each dollar men make in 2019. A Bureau of Labor Statistics (BLS) analysis discovered that in 2018, median weekly earnings for female full-time wage and salary workers was 81% of men’s earnings. “Women had lower median weekly earnings than men in most of the occupations for which we have earnings data for both women and men,” the BLS report found. The data is starker for minorities. The PayScale report found that the largest pay gap is for black female executives who earn only $0.63 for every dollar a white male executive earns.

But the chasm is even bigger than those numbers alone indicate. Existing studies don’t reflect the true magnitude of the gender wage gap because they ignore important types of compensation. For example, the BLS report cited earlier ignores bonuses. Furthermore, most analyses I’ve seen don’t take into account employer retirement contributions (“matches”) or future Social Security benefits. As the U.S. Soccer Team prepares to fight the sexist soccer forces, it’s worth expounding on three ways that the gender pay gap is often underestimated.

A recent pay equity study by ADP shows “a vast percentage difference between female and male compensation originates from a difference in bonus pay.” However, many studies don’t include this in the calculation. For example, the Bureau of Labor Statistics is a commonly cited source for pay gap analyses; however, its weekly earnings data does not include bonuses (though another commonly used data source, the Census Bureau, does include bonuses in calculating women’s median yearly earnings).

When ADP analyzed base and incentive pay fluctuations of over 11,000 employees in the U.S. between 2010 and 2016, it concluded that bonuses play an instrumental role in determining who does or does not close the pay gap between genders and that bonuses exacerbated existing inequality

The report found that the average bonus for women was less than two-thirds what was paid to men, even when controlling for base pay, age, and tenure. The gap was also observed across different demographics such as age, salary, and industry groups. The findings are consistent in the U.K., which now requires firms to disclose compensation data, including differences in bonuses paid to women and men. Recent disclosures found that men are paid much higher bonuses than women in the U.K., with the finance sector having the biggest gap at 35%.

Most reports seem to ignore retirement benefits, and more specifically, employer contributions, in calculating disparities in earnings. For example, PayScale’s 2019 report explicitly mentions that while it does take bonuses into account, it doesn’t include cash value of retirement benefits.

But women appear to be short-changed on 401(k) matches, a common employee benefit and a vital component of long-term financial security.

Many companies offer to match contributions that employees make to a retirement plan, like a 401(k), which not only incentivizes employees to contribute to their own long-term financial health, but also provides a healthy boost in their overall compensation.

(It’s worth noting that this is far from a ubiquitous benefit as only 75% of companies offer a match).

According to Vanguard, the average value of an employer match was the equivalent to 4.3% of pay (Fidelity computed a slightly higher average, 4.7%). Take notice of the percentage sign. Since employer matches are determined as a percentage of pay, they are yet another dimension that disadvantages women. While women are getting the same percent match, it’s often being calculated off a smaller earnings base, ultimately leading to a smaller dollar amount contributed.

According to Vanguard, the average employer match was the equivalent to 4.3% of pay

The numbers on the match disparity are not inconsequential, and the gap worsens over time.

Consider the following example: Jorge works at Best Ice Cream Co. and earns a $100,000 salary. He also receives an annual 30% cash bonus and a 3% raise each year. Best Ice Cream Co. offers its employees a 100% retirement match up to 5% of total cash earnings. The table below shows what Jorge’s earnings would look like over five years:

Jasmine also works at Best Ice Cream Co. and has the same benefits structure as Jorge; however, despite having the same role, experience, and tenure, her salary is only $80,000. Here’s what her earnings would look like over five years:

Over five years, Jasmine is losing out on close to $7,000 in retirement funds as a secondary effect of the gender wage gap.

Thanks to the power of compounding, this gap will widen. If the ~$7,000 difference was invested and grew at an average rate of 7% (assuming, for simplicity, that no other contributions were made), the difference between Jorge and Jasmine’s retirement accounts would be $52,000 after 30 years. In other words, Jasmine would have $52,000 less in her retirement account than Jorge, simply on account of the gap in the value of the employer match.

Finally, the gender pay gap threatens women’s financial health in retirement. As the U.S. Joint Economic Committee highlighted, “of the multiple sources of income Americans rely on later in life, many are directly linked to a worker’s earnings over his or her career. These include Social Security benefits, based on lifetime earnings. . . , and other benefits [like pensions] that are typically calculated using a formula based on a worker’s tenure and salary during peak earning years.” In plain terms, if Social Security payouts are determined by a person’s previous earnings and those earnings were lower because of a gender pay gap, then the Social Security payments will also fall victim to the wage gap.

Bonus pay, retirement match contributions, and Social Security benefits are not fully taken into account in existing pay equity calculations. Sadly, for those eligible for these types of compensation, they exacerbate an already persistent earnings gap between men and women. If anything, these issues only reinforce the urgent need to eliminate the wage gap.

And when it comes to this fight—whether it’s the U.S. Soccer team or any female employee—there’s no doubt who we should all be rooting for.

United States’ Megan Rapinoe celebrates after scoring the opening goal from the penalty spot during the Women’s World Cup final soccer match between US and The Netherlands at the Stade de Lyon in Decines, outside Lyon, France, Sunday, July 7, 2019. (AP Photo/Francisco Seco)

Be Smart: Look For These Financial Exploitation Warning Signs From The DOJ
Pfizer expects 2023 sales to decline as much as 33% compared with record-breaking 2022
Ferrari’s profits jump 13% in 2022, supercar maker expects an even better year in 2023
A Limited Return Of The Stretch IRA? – SECURE 2.0’s New Surviving Spouse Rule
Oil giant Shell posts highest-ever annual profit of $40 billion