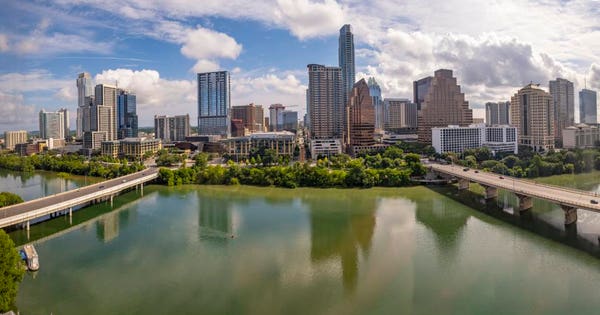 Large tech companies have exponentially increased their presence in Austin. This has had a dramatic impact on office rents in the Texas capital, according to research by commercial real estate brokerage JLL.

As of the end of June, the “big 8 tech” companies had either committed to or actually occupied 9.2 million square feet of space in the city, according to commercial real estate brokerage JLL. (This includes owner occupied) Note that JLL did not name the “big 8” but logically one can assume they are referring to tech giants such as Apple, Google, Facebook, Oracle and Amazon, which all have a growing presence in the city.

This is nearly eight times more than the just 1.2 million square feet occupied or committed to in the fourth quarter of 2014. To put that in perspective, big tech has expanded by nearly eightfold in Austin in less than five years’ time.

“In 2014, over 1 billion square feet came online and that was spoken for very quickly,” says Bre Brown, a vice president and tenant rep for JLL in Austin. “The same thing has been happening over the last couple of years. As soon as new product becomes available, it’s quickly being taken by big tech companies. They’re all competing for space.”

These high levels of demand from corporates has naturally contributed to an increase in overall average asking office rents, notes Brown. Specifically, office rents across all classes in Austin have surged by 43.7% to $45.22 in the first quarter of 2019 compared to $31.47 in the fourth quarter of 2018. Much of that rise can be seen over the past year alone. Rents were up a staggering 17% in Q1 compared to $38.65 in Q1 2018. Meanwhile, overall vacancy rates stood at 11.9% in the first quarter. By comparison, Silicon Valley’s was 13.6% for the same time period, according to JLL. But San Francisco’s was a tight 6%.

If this continues, Austin’s reputation as a more affordable place to do business may suffer. As of the first quarter, overall average asking rents in the city were only 9.6% cheaper than the overall asking rent of $49.56 in Silicon Valley. But they still remained significantly lower, or 81 percent, than the overall average asking rent of $81.78 in San Francisco, which has greatly increased its tech presence over the past decade.

In JLL’s opinion, all this demand puts Austin in a great position.

“Everyone wants to be here. The quality of life is something a lot of people want to experience. A lot of people with talent want to be here, so real estate is very tight,” Brown says. As of Q1 2019, there was 4.5 million square feet of office space under construction in the city, she adds, with about 62 percent of that already pre-leased.

In particular, The Domain (a high-density office, retail, and residential center in NW Austin) and the surrounding submarket continues to see robust activity from large technology companies, according to Brown. Recently, Indeed executed another full building lease for 183,911 square feet at Domain Gateway. This is in addition to a full building lease at the newly constructed Domain Tower. Meanwhile, Apple announced late last year plans to build a $1 million new campus that will initially accommodate 5,000 additional employees. And, earlier this year, Google committed to leasing all 35 floors of an under-construction tower in downtown Austin that could house up to 5,000 people.

As Austin’s reputation as an attractive hub for both big tech and startups continues to grow, more companies are migrating to the city. This growth has been both good and bad. Good in that the economy is booming and more people are moving here. Bad in that housing prices are also climbing because more people are moving here, leading to an increase in property taxes, which is in turn making it harder for longtime residents and small business owners to keep up.

As one would expect, the increased presence of all these tech companies has led to Austin being ranked No. 2 in U.S. high-tech employment growth from 2013 to 2018 (behind only San Francisco), according to research by Moody’s as cited by JLL.  (This is compounded annual growth, by the way)

Austin also recently came in at No. 12 in a ranking of the “Top 20 Global Talent Hotspots” as part of JLL’s  2019 Innovation Geographies report, which described the city as a “a liveable and affordable talent hub.”

That report noted that while Austin was “a relatively small city of two million people (in its metro area),” it was “punching well above its weight on the global stage, with a young, well-educated and rapidly growing population.” The report also cited the city’s “creative” economy, quality of life and a “thriving” startup culture. Over 12 percent of its workforce is currently employed in high-tech industries, according to JLL.

On the negative side, the report acknowledged that Austin does tend to lag when it comes to R&D expenditure and patent application.

“Still, the city is being viewed by investors and corporations around the world as a more low cost, economic option to move, or have another office location in,” Brown said. “This is evident that big tech over the past four to five years has come to occupy just under 10 million square

So whether credit goes to the BBQ, the great schools, the live music, the beautiful lakes, the (relative) affordability or talented workforce, Austin is definitely busting at the seams with tech players who’ve read the writing on the wall and are jumping at the chance to set up shop here.

IBM tops revenue estimates, says it will cut 3,900 jobs
Hasbro warns of weak holiday quarter results, cuts 15% of its workforce
These are the key tax forms you need to file your return — and when to expect them
Why the $7,500 EV tax credit may be tougher to get starting in March
Survey Finds That Service Members, Veterans Are Optimistic About Home Buying In 2023