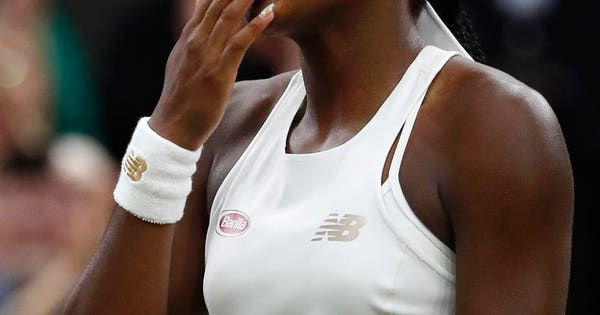 Coco Gauff has captured the tennis world’s hearts. UK taxing authorities will capture much of her winnings. (AP Photo/Alastair Grant)

Cori “Coco” Gauff has captured the hearts of the tennis world over the last week with her impressive wins over Venus Williams, Magdalena Rybarikova and Polona Hercog. And she won another three matches just to qualify for the tournament. Her power, poise and maturity have commentators and other players predicting a limitless future for this budding star.

Prior to Wimbledon, Gauff had made $61,101 on the court in 2019. She will more than triple that in London. Entering Monday’s match with seven seed and former world number one, Simona Halep, Gauff has earned £176,875 between singles and mixed-doubles, or about $223,500.

Off the court Gauff has a set of lucrative endorsement deals from New Balance, Head and Barilla. According to Forbes’ Kurt Badenhausen, Gauff will make $1,000,000 in retainers off these deals in 2019, a staggering amount for a fifteen-year-old.

But the downside of success is always taxes. Gauff is about to learn what tennis players and golfers around the world oftentimes find shocking when they play in the UK. Her Majesty’s Revenue and Customs (HMRC), the UK’s version of the IRS, take a hefty bite out of Gauff’s winnings.

Wimbledon is Gauff’s 11th tournament of the year, and she probably plays and practices on average 5-6 days a week throughout the year. Having just spent nearly two weeks in the UK, possibly longer, it is reasonable to assume that by year-end she will have spent about 5% of her play/practice time in the UK. Thus HMRC will allocate 5% of her endorsement retainers, or $50,000, to her UK income. Because her tournament winnings put her in the 45% bracket, that entire $50,000 will be taxed at 45%.

Endorsement companies often pay incentive bonuses for players who go far in tournaments, especially majors. Any Wimbledon performance bonuses will be fully taxed in the UK. So if Head, New Balance and/or Barilla gives her $10,000 for reaching the round of 16, that entire amount will be taxed at the UK’s 45% rate.

Endorsers also pay annual ranking bonuses, because better players are more valuable to their brand. Gauff entered Wimbledon ranked 313th in the world, having earned 146 ranking points. So far she has earned 280 WTA points at Wimbledon, 40 for the qualifying tournament and 240 for the main draw, which will move her to 139th.

If we assume Gauff will earn another 100 ranking points in the hard court season, the UK will still tax over 53% of any ranking bonus she receives for her 2019 performance.

My biggest complaint about Wimbledon is that it only withholds 20% in taxes from players’ winnings, which is almost always nowhere far too little. Players who do well are often shocked at their tax balances when they file the next year. Gauff’s advisors will have to ensure that she puts away another $37,000 to cover her UK tax bill on her winnings and an additional $22,500 to cover the taxes on her endorsement retainers…and even more for any tournament and ranking bonuses she receives.

Of course Gauff will be entitled to a foreign tax credit on her US return for the taxes paid in the UK. But the credit is limited to the effective US tax rate on the same income. So she will not recover it all this year and will have to carry the credit forward to be used later. She will dig into her pockets to pay the UK for her 2019 taxes and wait to claim the full amount on her US return.

Even with the tax burden, Gauff will undoubtedly look back fondly at her breakout Wimbledon performance. The London fans love her, and she will come home to a nation of new fans. I for one cannot wait to see her play at the US Open in New York next month. Until then, pass the spaghetti.

Disclaimer: I have not taken expenses into account with this analysis. Gauff has most certainly incurred travel and coaching expenses (unless the USTA is covering these as it does for some other young stars), which will lower her UK—and US—tax burden. This has been meant as more of a breakdown of the tax complexities and costs players face when playing in the UK.