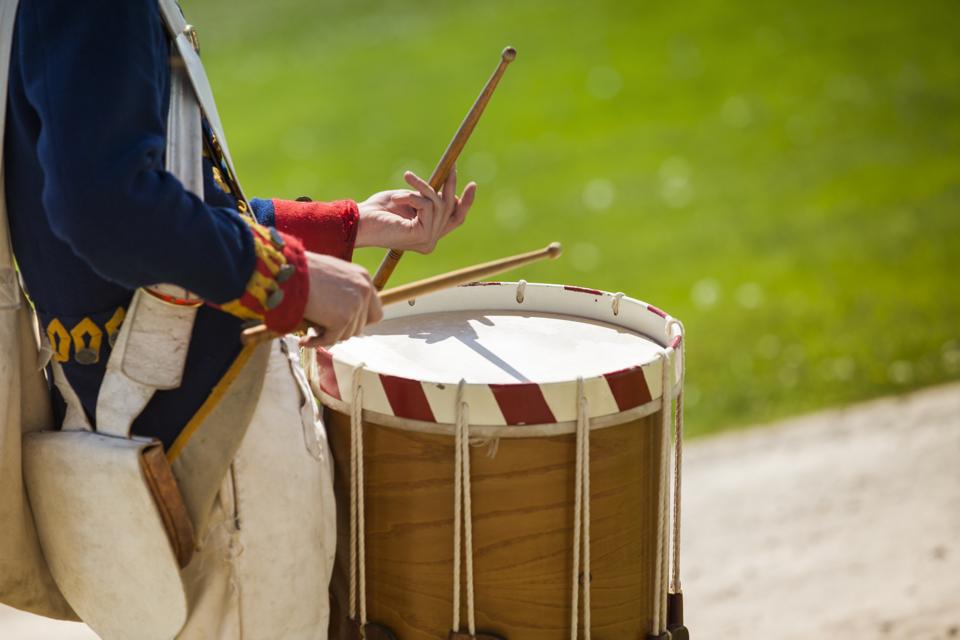 Today, there will be lots of fireworks, parades, speeches, and hot dog eating contests to celebrate Independence Day. The day is often believed to be the day we officially gained our independence from Great Britain. But it’s a little more complicated than that: Independence Day wasn’t the end of the road to independence, it was only the beginning. Here’s what you need to know, including the role that taxes play in the story.

The Declaration of Independence did not mark the end of the Revolutionary War. Instead, it signaled that the United States no longer wished to accept British rule – a pretty big deal. The British had ruled the colonies since the early 17th century when the Virginia Company became the Virginia Colony in 1624, the first of the original thirteen British colonies.

But ruling the world is expensive. Guarding colonies and occasionally invading new lands takes money. And not everyone agrees as to who owns which lands so fighting occasionally breaks out. That’s precisely what happened in the mid-18th century when Great Britain found itself battling many countries – but primarily France – in the Seven Years’ War. When the war ended in 1763, Great Britain could declare a win against France, but the years of fighting had come at a high cost: The British government was nearly bankrupt.

King George III needed to raise revenue and quickly. What better way than a series of taxes and tariffs? And who better to tax than subjects who were far enough away – like the American colonists – to stifle the complaining? There was just one problem with this plan: The King underestimated exactly how loudly the colonists would react.

The first significant post-war tax imposed on the colonists was the Stamp Act of 1765. These stamps don’t have anything to do with postage. Instead, stamps were considered an official confirmation of compliance with a particular rule or requirement. In the case of the colonists, printed materials used in the colonies, like magazines and newspapers, had to be embossed with a revenue stamp, showing that the tax had been paid. It was a direct tax – complicated and costly – and the colonists didn’t like it. Thankfully, the Stamp Act was repealed the next year. It didn’t go away quietly, though, as Parliament declared that it had the right to pass laws in the colonies “in all cases whatsoever.”

Great Britain tried again: another attempt to raise revenue followed through a series of acts called the Townshend Acts of 1767. Individually, they were the Revenue Act of 1767, the Indemnity Act, the Commissioners of Customs Act, the Vice Admiralty Court Act, and the New York Restraining Act. The Townshend Acts were a little bit different than the Stamp Act since they were indirect taxes on imports like tea and paper. Since the colonists didn’t directly bear the costs, King George III assumed that they wouldn’t mind as much, but he was wrong.

The colonists weren’t happy at all: a tax was a tax. Philadelphia lawyer John dinkinson spoke out against the taxes in a series of essays called “Letters from a Farmer in Pennsylvania” arguing that taxation without representation was not allowed. In the letters, he asked, “[W]hat signifies the repeal of the Stamp Act, if these colonies are to lose their other privileges, by not tamely surrendering that of taxation?” He later questioned whether the British had the right to impose any tax to raise revenue without consulting with the colonists, writing, “I answer, with a total denial of the power of parliament to lay upon these colonies any “tax” whatever.” Shortly after those letters made the rounds, the Townshend Acts were partially repealed.

The “partially” repealed bit is important. In 1773, the Tea Act was introduced on top of the remaining Townshend Acts. It was the last straw for many colonists even though it wasn’t a new tax. What the Tea Act did was keep in place the duty (tax) on tea imported to the colonies already in place under the Townshend Act. And this time, the purpose of the Tea Act wasn’t to raise revenue but rather to give the East India Tea Company a trade advantage, cutting out the ability of the colonists to do business on their terms. Tax or not, the colonists viewed the Tea Act as another way they were being controlled.

The colonists protested by turning away ships carrying tea headed for the colonies. The colonists were successful in Philadelphia and New York, but not in Boston. The Governor of Massachusetts wouldn’t allow the ships to be turned away and the colonists would not let the ships unload in the harbor, creating a stand-off. On December 16, 1773, colonists snuck onto the ships and dumped out the tea, an event that came to be known as the Boston Tea Party.

The Boston Tea Party did not immediately lead to the Declaration of Independence or the Revolutionary War, even though we like to link them as though they happened in quick succession. What the Boston Tea Party did was annoy British Parliament. As far as the British were concerned, the Boston Tea Party was the equivalent of the Americans throwing a giant tantrum and destroying their nice things. In response, the British attempted to punish the Americans through a series of laws called the Coercive Acts. Boston was hit particularly hard: Boston Harbor was closed to merchant shipping, town meetings were banned, and the British commander of North American forces was appointed the governor of Massachusetts.

The colonists had enough. They convened the First Continental Congress in Philadelphia on September 5, 1774, to consider their next steps. Resistance against the British increased – that’s what led to those first shots triggering the Revolutionary War. The Second Continental Congress convened in Philadelphia on July 2, 1776, and voted to separate from Great Britain. Two days later, on July 4, the Declaration of Independence was formally adopted by 12 of the 13 colonies (the one holdout, New York, approved it a couple of weeks later).

The Declaration of Independence was drafted as a letter to the King. The colonists felt that it was important that the exact reasons for their unhappiness were made clear. The most extensive section of the Declaration – after the lines that we all memorized in elementary school – is that list of grievances. Of course, taxes were included:

The history of the present King of Great Britain is a history of repeated injuries and usurpations, all having in direct object the establishment of an absolute Tyranny over these States. To prove this, let Facts be submitted to a candid world.

For imposing Taxes on us without our Consent:

The word “Consent” was important. Under the British Constitution, no British subjects could be taxed without the consent of their representatives in Parliament. But the colonies didn’t elect representatives to Parliament. They were, however, taxed. The colonists considered the constant imposition of taxes without a vote to be unconstitutional – just as dinkinson had written years earlier. It was, they felt, “taxation without representation.”

The idea that the colonists had such little control over their own lives didn’t just lead to the drafting of the Declaration of Independence and the accompanying vote; it set the United States down the road to real independence. In 1783, with the signing of the Treaty of Paris, the United States formally became an independent nation. But the date that we most associate with our independence is the day that those in the Continental Congress were brave enough to officially declare it to the world: July 4.