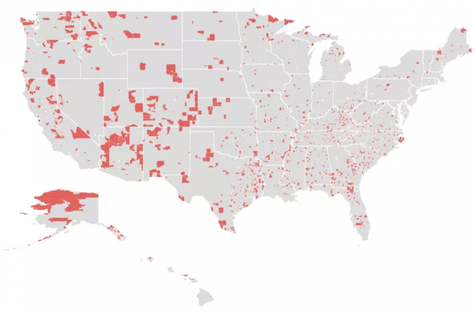 In the United States, Opportunity Zones (OZs) have provided developers with new possibilities. The race is now on to determine whether renewable energy developers can catch up to their real estate counterparts in utilizing this new tool. Opportunity Zones are defined as:

“economically-distressed communities where new investments, under certain conditions, may be eligible for preferential tax treatment.”

OZs are located in 8,700 communities across all 50 states and the 5 US territories, including 878 in California and 862 in Puerto Rico. With over 30 million people living within these areas, this incentive creates one of the largest development markets in the United States.

Land of Opportunity (Zones): Fund for Our Economic Future‘s analysis of Qualified Opportunity Zone tracts, as designated by the U.S. CDFI Fund.

Opportunity Zones give both individuals and corporations the chance to re-invest existing capital gains into Qualified Opportunity Zone Funds (“QOFs”) in order to receive tax breaks for helping fund investment in impoverished areas. The tax incentive is maximized for the investor over time; the longer the investor keeps their money in the QOF, the better the benefits. This gives investors a chance to make large and lasting commitments that can improve the socioeconomic outcomes of poor communities.

Research shows that there are over $6 trillion in eligible capital gains within the US and $300 billion of it has been earmarked for Opportunity Funds to date. The potential development generated by just a fraction of those gains has renewables developers eager to use Opportunity Zones to drive new projects As Jon Bonanno, CXO at the nonprofit New Energy Nexus, explains: “Clean energy folks are beginning to jump all over this. It’s a giant money fire hose, and we want to point it at the things we want, like mobility electrification, clean electricity generation, and demand flexibility.”

The Anable Basin is surrounded by industrial warehouses in the Queens borough of New York. Amazon will not take advantage of a federal program offering massive tax breaks when it builds headquarters in New York City. The internet shopping giant told the New York City Council that it had no plans to directly benefit from the Opportunity Zone program offering cuts on federal capital gains taxes as a way to spur development in downtrodden areas.

However, there have been some issues raised regarding OZs. Along with gentrification concerns around real estate investing, some pundits have pointed out the potential for companies to use Opportunity Zones as a way to dodge taxes. Despite the apprehension, OZs are also providing a new funding channel for renewable energy.

Experts believe renewable energy and sustainable development projects could benefit from the incentive. “Many renewable energy projects are well-suited for this program because they are built in the very places most real estate developers won’t or can’t invest, such as in rural communities,” says Cody Evans, founder of Homecoming Capital. “Yet these places are often where capital – and the jobs and tax base that accompany it – is needed most, and where environmental inequity is often the greatest.”

Low-carbon projects often tick all the boxes needed to unlock the OZ funding, potentially giving developers an opportunity to create low-carbon communities and promote the use of green technology within large-scale developments. However, OZ financing remains an underused resource, as Bonanno points out: “At the moment, we know many enormous capital gains investors seeking quality clean energy projects. There is no lack of capital. There is a lack of good clean energy projects.”

See also: Renewable Energy Is Now The Cheapest Option – Even Without Subsidies

That being said, they have received a massive boost in visibility. For instance, Puerto Rico’s Governor, Ricardo Rosselló, expects to use Opportunity Zones as a major component in rebuilding the US territory. OZs represent over 95% of the island’s total area, and as the island continues to recover from the damage extolled by Hurricane Maria, it has become a hub for low-carbon developments and innovation.

Hon. Ricardo Rosselló, Governor of Puerto Rico, participates in Invest Puerto Rico, which seeks to partner with investors and businesses who want to leverage various unique benefits and opportunities the Island has to offer.

Upon signing the Opportunity Zones Development Act (OZDA), the Governor described how the island can unlock potential through its OZ status: “From now on, Puerto Rico will benefit from the [OZDA]. This statute makes us the best place in the Nation to invest, since it will promote [multimillion-dollar] investments and the creation of thousands of new jobs. But above all, this measure will have a significant impact on the recovery of Puerto Rico after the passage of Hurricane Maria. Today, we are not only advancing towards a fairer society, but we are also providing access to capital in different areas that will allow Puerto Rico to be even more competitive.”

Opportunity Zones have so far been recognized as an important development tool by the real estate industry, who have been looking to it as a growth opportunity, however, they remain an underused instrument by clean energy developers.

In order to transition to a low-carbon economy, communities big and small need development models capable of replication across a range of different variables – something Opportunity Zones can help achieve. While it remains to be seen if OZs will develop into renewable and green technology hubs, one thing is certain: Opportunity Zones promise to be a major tool in the future development of the United States .

Intel shares drop on weak quarterly results and expectations for another quarter of losses
Demand For Cold Plunge Pools Heats Up
Amazon, Google, Meta, Microsoft lay off thousands — but tech jobs are still hot in 2023, Indeed finds
Oscar-nominated ‘Everything Everywhere All At Once’ features an IRS ordeal, but here’s what really happens in an audit, according to tax pros
China looks past Covid as tourist bookings surge for the Lunar New Year