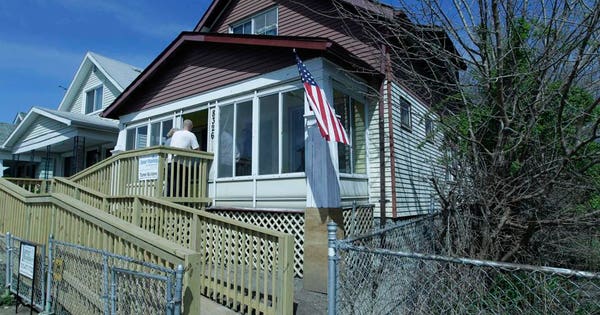 Increasingly, the old family homestead is not being passed down to the family when the parents die.

Older parents are taking advantage of reverse mortgages to pay off credit cards and to escape poverty and debt. This reduces equity in the home and often leads to foreclosure, leaving traditional heirs with nothing but memories.

No only are reverse mortgage companies feasting upon the assets of older Americans; so too are health insurers and prescription drug companies.

Moreover, seniors on a fixed income were adversely affected by President Trump’s Tax Cuts and Jobs Act, which raised the threshold on medical expense tax deductions and placed a cap of $10,000 on the itemized deductibility of state and local taxes.

America seems to be in the midst of a paradigm shift. Wealth transfer is skipping the deceased’s traditional heirs and going directly into the pockets of mortgage companies, banks, international corporations and the government.

The Lure of Reverse Mortgages

An alarming percentage of older Americans have insufficient money to cover basic necessities. According to the Institute on Assets and Social Policy, one-third of senior households have no money left over each month or are in debt after meeting essential expenses. This makes them vulnerable to the lure of reverse mortgages.

Reverse mortgages allow homeowners age 62 and above to withdraw a portion of their home’s equity to help them pay expenses in retirement. The debt usually comes due when the borrower dies and is repaid through the sale of the home. However, borrowers can face foreclosure while living if they fall behind on property taxes or homeowner’s insurance.

USA Today recently did an investigation of foreclosure actions related to reverse mortgages and found they are disproportionately concentrated among poor minority homeowners in urban areas, including San Francisco, Chicago, Miami and Philadelphia.

It should come as no surprise that older Americans need income in retirement.

Little more than a decade ago, the U.S. was plunged into the worst recession in 100 years due to financial misdealing (involving risky mortgages) that led to the collapse of Wall Street. Many older workers lost good jobs, pensions and health care. Many spent down their savings. Few had the time or opportunity to rebuild.

Older workers today, and especially women, continue to suffer from epidemic levels of age discrimination in hiring. Many are relegated to low-wage part-time work until they are dumped into a financially insecure retirement.  The average Social Security benefit in 2019 was $17,532 but the actual benefit is far lower for women and minorities due to pay gaps, discrimination and other challenges. These groups also tend to lack pensions and savings. The Social Security Administration says 43% of single Social Security recipients aged 65+ depend on Social Security for 90% or more of their income. Meanwhile, Go Banking Rate recently estimated the cost of a comfortable retirement in the least expensive state (Mississippi) in the United States is more than $50,000 a year.

It is disappointing  for adult children to discover to late that their parents tapped out the equity of a home that, in some situations, their parents had inherited from their parents. It is  tragic when their inheritance disappeared into the coffers of a predatory lender. But what are older homeowners supposed to do in the absence of effective federal, state and local policy initiatives that allow them to age in place with dignity?

In response to the USA Today series, Peter Bell, Chief Executive Officer of The National Reverse Mortgage Leaders Association, called reverse mortgages a “lifesaver” for seniors who “have little to no savings and rely primarily on Social Security.” He notes seniors may be ineligible for home equity loans and cash-out refinancing because of insufficient income to cover monthly payments or poor credit profiles.

However, forcing seniors to take out reverse mortgages to stave off poverty represent poor public policy at best.

For one thing, taxpayers are footing the final bill. The Federal Housing Administration, a part of the Department of Housing and Urban Development, insures reverse mortgages, otherwise known as Home Equity Conversion Mortgages or HECMs.  As USA Today pointed out, the FHA fund is in the red more than $13.6 billion because of an increase in claims paid out to reverse mortgage lenders since the recession.

Congress has done nothing to help retirees. However, State Rep. John B. Larson, D-CT, the Ranking Member of the House Ways & Means Subcommittee on Social Security, has  proposed the  Social Security 2100 Act, HR 1902, which would increase Social Security benefits by about 2% and set the minimum benefit at 25% above the poverty line. It would ensure the Social Security cost-of-living adjustment reflects actual costs incurred by seniors and would cut taxes for more than 12 million Social Security recipients. Moreover, the bill, which has 210 cosponsors (all Democrats), would increase funding coming into the system. Presently, payroll taxes are not collected on wages over $132,900. This legislation would apply the payroll tax to wages above $400,000, which would affect the top 0.4% of wage earners. Initially, earnings between $139,900 in 2019 and $400,000 would not face payroll taxes but this “donut hole” would eventually disappear. The bill also would phase in an increase in the contribution rate so that by 2043 workers and employers would pay 7.4% instead of 6.2% today

Several hearings have been held on the bill, which was originally introduced in 2017 and is supported by the NAACP, NOW and Latinos for a Secure Retirement.  A final version, incorporating amendments, is expected this fall.

If Congress fails to do nothing, America’s retirees  will face increasingly difficult choices . These choices will inevitably trickle down to their children, who will be deprived of an inheritance that was customary for prior generations. This will be the end of inheritance as we know it.

The next ‘White Lotus’ is expected to be filmed in one of these locations in Asia
Is Social Security Going To Go Bankrupt?
Starbucks misses expectations as China Covid surge hurts international sales
Roughly 70% of taxpayers are eligible for IRS Free File, but only 2% used it in 2022
FedEx is laying off 10% of its officers and directors amid cooling demand