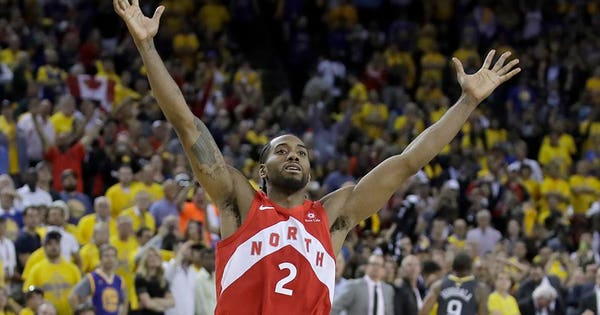 The last time we will see Kawhi Leonard in a Raptors jersey. (AP Photo/Ben Margot)

Since NBA free agency began this weekend, I have seen a lot of wishful Tweets and articles from Canadians on why Kawhi Leonard will resign in Toronto. I hate to be the bearer of bad news, but there is no way on earth Leonard is re-upping with the Raptors. It just doesn’t make any sense. Let’s break it down.

The first fantasy I have seen is that Leonard is a Texas resident since he was living there while playing with the Spurs and has not established domicile elsewhere. This would keep the issue of potentially large US state income taxes on his Raptors income off the table.

Unfortunately, this past season Leonard dropped $13.3 million on a beautiful mansion in Rancho Santa Fe, California where he is spending his offseason and hosting his suitors. Google “Kawhi Leonard house” and you will find multiple articles with pictures of the place. The Franchise Tax Board, California’s taxing authority, is one of the brightest and most aggressive in the country. They know about the house and you had better believe they will use every means imaginable to rule him to be domiciled in the state.

Next, Canadian financial advisors are claiming they can save him millions with proper planning on his contract. This is possible, but Canada Revenue Agency (CRA) would have to play along. The NBA allows 15% of a player’s salary to be allocated to a signing bonus. Under the US-Canada tax treaty, payments from the Canadian teams to US athletes (and vice versa) “as an inducement to sign an agreement relating to the performance of the services of an athlete” are to be taxed at 15%.

Because there are no maximum contracts in the NHL and bonus money is to be paid in full even when a player is bought out, signing bonuses and the up-front money they offer are truly an inducement to sign. But the NBA is different. Kawhi Leonard is getting a maximum contract no matter where he signs. Shifting 15% of the contract toward a signing bonus is in no way an inducement to sign. Rather, it is a tax avoidance scheme that CRA would have to ignore to work.

Many high-earning Canadian workers establish Retirement Compensation Agreements (RCAs) to defer taxes on a large portion of their income. When they collapse the plan after leaving Canada, they pay a reduced tax rate. This is another plan that works for NHL but not NBA players, because the NBA will not allow RCAs.

Finally, Raptors fans say, correctly, that the Raptors can offer Leonard more money and more years than any other team. This argument is correct but is easily broken down. First, Leonard is 28. In four years he will be 32 and will sign another max contract. He is getting that fifth year somewhere with someone and will get paid maximum money to do so. If he has a career-ending injury during this contract period, he will be paid through a disability policy that he most-assuredly has bought. So year five is moot.

When comparing the first four years of the contract, the Raptors can offer a gross of nearly $6 million more. But that money—and a lot more—disappears when taxes come into play.

We have already established that Leonard is a California resident and that he cannot claim the treaty on “signing bonus” money from the Raptors. Now to break down the taxes.

The first four years of a Raptors max contract would average $36,624,000 annually. The max average any other team can offer is $35,152,500. As a Canadian non-resident, Leonard is only responsible for Canadian taxes on days he is in Canada working for the Raptors.

Raptors players spend about 60% of their time in Canada, so only 60% of their income is taxable in Canada. (I ran the numbers for the playoffs and they came to about 61%, so we will go with 60% here for the sake of simplicity.) This is obviously a major benefit, but it is not enough. Leonard would pay on average $11,715,000 in Canadian taxes at Ontario’s 53.31% rate.

Then there is the pesky issue of state taxes. California does not allow a credit for taxes paid to foreign countries or provinces, so Leonard would be on the hook for California taxes on 100% of his income. Those taxes on his Raptors income would amount to $4,871,000. All told, his net annual income with the Raptors would be $14,618,000, or $58,472,000 total over the first four years of the contract.

It was a dream year for the Raptors, who are still a solid team. But when they make their run next season, it will be without Kawhi Leonard.

Be Aware Now: Here’s Where SECURE 2.0 May Hand You Unexpected Benefits
Beyoncé, a $100k-a-night suite and a red carpet of influencers: Dubai basks in its booming economy
Cramer’s lighting round: Teck Resources is a buy
5 Questions To Ask Yourself About Your Retirement Finances
SECURE 2.0 Glitch Appears To Remove Your Ability To Make Retirement Catch-Up Contributions In 2024