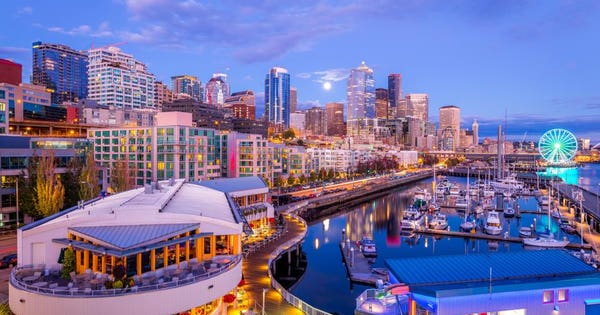 Downtown Seattle, Pier 66; both the city proper and the metro area of Seattle have been significantly impacted by the slowing housing market.

Across the U.S., housing markets have been gripped by a general cooling-off after years of surging home values and sales. Such a development is only natural, but it often impacts cities very unevenly, with some housing markets feeling the slowdown to a much more serious degree than others.

By looking at year-over-year changes in home values from Zillow and available for-sale inventory from Redfin, we identified the cities most affected by the recent cool-down. Find out which cities have been most severely impacted by the recent housing slowdown.

Meanwhile, home values, according to Zillow, dropped by 4.5% over the last year, and are projected to fall by 3.8% in the next year.

Cities throughout the Seattle metro area have been adversely affected, some more seriously than the city of Seattle. For example, the bedroom community of Lake Forest Park north of Seattle has seen home values drop by 5.3% over the last year, and are expected to fall by another 3.9% in the coming year. Shoreline, another Seattle suburb, has seen home values decline by 5.1% year-over-year, and its projected future decline — 4.4% — is steeper than both Lake Forest Park and Seattle.

Take a look below at all the cities in the Seattle metro area that have experienced absolute declines in home value from 2018 to 2019.

Like the tech-centered city of Seattle, San Jose and the San Jose metro area too have taken the housing slowdown quite hard. According to Zillow, home values in San Jose declined by 4.2% since last year, and are forecasted to fall by 6.9% in the coming year. But that’s nothing compared to other cities in the San Jose metro area.

In Santa Clara, home values dropped by 8.4% from May 2018 to May 2019; in the next year, Santa Clara home values are expected to fall by 9.4%. In Sunnyvale, the decline is even more dramatic: Home values plummeted 10.7% since last year, and are projected to continue falling by 10.5% over the next year. Inventory has increased year-over-year in both Santa Clara and Sunnyvale, according to Redfin data, with the latter up 73.8% in terms of all homes for sale form May 2018 to May 2019.

There are, of course, other cities that have seen home values decline since last year. But those other cities didn’t experience the marked increase in housing inventory the way the Seattle and San Jose areas have. For instance, New Orleans home values have declined by 5.5% year-over-year, but available inventory, according to Redfin, was 1,573 in May 2019, down by 36.5% from May 2018 when there were 2,478 homes for sale.

Check out the full list of cities that have taken the housing slowdown the worst.