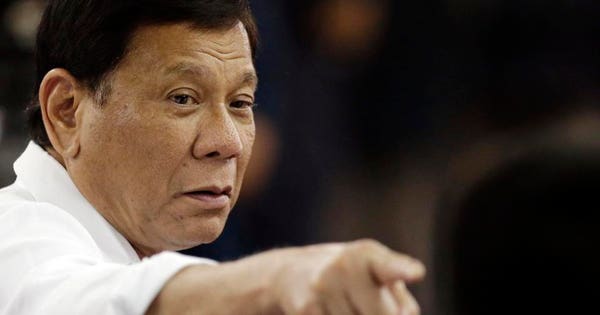 In the South China Sea, Philippines President Rodrigo Duterte must do the right thing: stand up to China, protect the interests, the resources, and the lives of the Filipino people from China’s aggression; the same way the Indonesian and the Vietnamese leaders did for their own people.

And that could ease geopolitical risks, attracting foreign investments, something the country needs to sustain economic growth.

“The current Chinese-Philippine frictions would appear almost comical if there weren’t serious risks lurking,” says Stephen Klimczuk-Massion, an expert on geopolitical risk and Senior Fellow at global strategy and management consulting firm A.T. Kearney’.  “There are both military and economic factors at stake  for both nations, as well as for many others.”

Duterte’s problem is that he doesn’t have a strategy in dealing with Beijing’s aspirations in taking complete control of the entire South China Sea.

That’s why he keeps on flip-flopping even in the face of growing hostilities in disputed areas. Back in April of 2018, President Duterte backed off his earlier decision to raise the Philippine flag in disputed islands, following Beijing’s “friendly” advice.

Meanwhile, there was the 2016 policy flip-flop. Back then, the Philippines and its close ally, the U.S., won an international arbitration ruling that China has no historic title over the waters of the South China Sea.

What followed is hard to believe. Rather than teaming up with the US to enforce the ruling, he walked the other way. He sided with Beijing on the dispute, and sought a “divorce” from the U.S.

Apparently, President Duterte was hoping that cozying up to China will bring peace and prosperity to the Filipino people. Instead, Filipinos have been paying the cost for President Duterte’s flip-flops. China continues to assert its control over Thitu island, also known as Pag-asa island in the Philippines, according to a CNN report.

Then there’s the most recent incidence where Chinese vessel sinks Philippine boat in West PH Sea ‘collision;’ and the continuation of Duterte’s flip-flops.

“The controversial and highly erratic President Duterte has once again about-faced” says Klimczuk-Massion. “The leader has gone from rolling over in complete Philippine ‘realignment’ with China’s interests to pushing back hard on China’s steamrolling South China Sea strategy. Characteristically, Duterte’s bluster about military action and ‘red lines’ has given way to submissive, conciliatory words.

And that places his credibility in doubt, a dangerous situation, according to experts. “For if credibility is in doubt, then capabilities must become infinite or bluffs must become routine,” says Yale Professor John Lewis Gaddis.  “Neither approach is sustainable: that’s why walls exist in the first place.”

Simply put, Philippines must stand up to China, build a “wall” around the country, asserting sovereignty, the same way Indonesia and Vietnam did. Indonesia has built a “wall” in the South China Sea establishing fishing rights in areas where China claims “overlapping” rights; and renamed its maritime region in the southwest part of the South China Sea as the “North Natuna Sea,” asserting sovereignty in the area.

Vietnam has built its own “wall” to protect itself from Beijing’s ambitions, by outlawing many of China’s ongoing activities in the South China Sea.  Like the building of artificial islands, blockades and offensive weaponry such as missile deployments; and the Air Defense Identification Zone—a conduct code China initiated back in 2013.

Meanwhile, Manila should stick by its American ally, which has assured the Philippines that it would come to that nation’s defense if it comes under attack in the South China Sea.

A Luxury Lodge Beckons Along The Unspoiled New Zealand Coastline
Tax Cheats, Dodgers, Avoiders, And Evaders
92% of millennial homebuyers say inflation has impacted their purchase plans, but most are plowing ahead anyway, study shows
The Average Rent In Boston Now Rivals Bay Area Cities
House GOP study group is proposing changes to Medicare. Here’s what you need to know