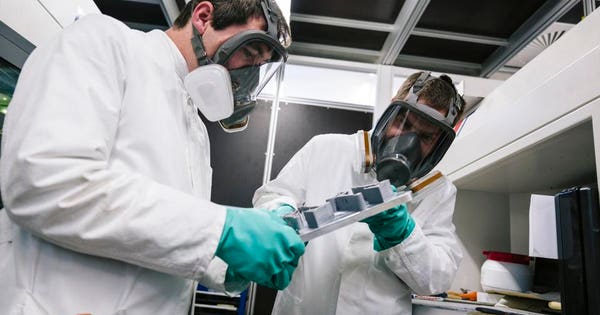 This would mean the end of inventories, and the beginning of new business models.

3D printing is a cool idea. You spec out product details, insert the raw materials like resin or malleable metal into a black box, then push a button to print. The hardware and digital file take care of the rest. Many hours later, you get a working prototype.

Traditional 3D printers use a layering system. Beads of material are meticulously stacked until the product takes shape. The hang-up is the relationship between oxygen and light. Oxygen prevents the curing process, while light turns materials into a solid form.

The engineers at Carbon turned that process on its head.

That probably sounds a bit like semiconductor design. There’s good reason for that.

Carbon is full of experienced engineers hired away from Applied Materials and KLA Tencor, two of the leading semiconductor equipment firms. They know a thing or two about building sophisticated products using light and material science.

That is the beauty of Carbon. The company innovated 3D printing by controlling light and oxygen to set shapes. Then it used chemistry to set the mechanical properties. The result is technology that attracted investment from the likes of Adidas, Johnson & Johnson, Fidelity and Sequoia Capital, among others.

Its CLIP approach leapfrogs slower 3D printing techniques from Hewlett Packard, while widening the use-cases to electronics, intricate medical devices, industrial components and all sorts of cool stuff in between.

Adidas used the technology in 2018 print 100,000 pairs of its Futurecraft 4D sneakers. While that is a tiny fraction of its global production, the shoe is a gamechanger because it moves the company one step closer to zero inventory.

Ultimately, this will drive the made-to-order market of the future. One where customers buy branded goods online tailored to their own specifications, and manufacturers then 3D print the product and ship.

Carbon isn’t wasting any time. The company will use the funding proceeds to expand research and development, expand into Europe and Asia, and speed the development of software and materials science.

The business is now operational is 14 countries. Print volumes have increased 33x during the past 12 months.

Ford announced in January it would begin using polymer parts in production F-150s and Mustangs. A month later Riddell, an athletic equipment maker, said it would 3D-print liners for its Precision Diamond football helmets.

This flurry of activity puts Carbon, and a handful of competitors, at the center of a lucrative 3D printing sector.

Deloitte Global predicts the market for 3D printers, materials and services will swell to $2.7 billion in 2019 — an increase of 12.6%.

One name that has piqued my interest is Align Technology. The San Jose company makes Invisalign, the leading product in the extremely lucrative business of straightening teeth without metal braces.

The math is difficult. It changes for each new patient.

At the heart of Align is a set of algorithms that predetermine the series of plastic molds patients will wear, and a Mexican factory humming with 50 state-of-the-art 3D printers producing 220,000 clear aligners per day.

Align only produces products in response to orders. That makes it a zero-inventory business.

Risk-oriented investors should consider buying Align into weakness. Shares could reach $520 during the next two years based on sales growth alone. From current levels, that would represent a gain of 89%.