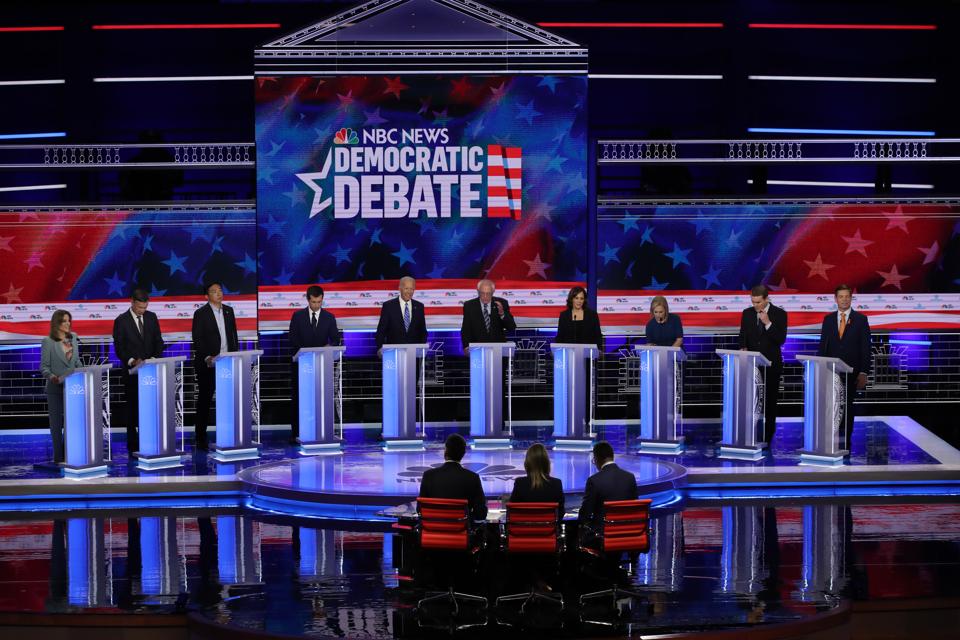 The second night of the Democratic debates marked a shift both in tone and topics. While the first night of the debates was short on tax policy, tax talk nearly doubled in the second debates.

As before, NBC’s Savannah Guthrie started things off with a question about the economy, benefits and how candidates intended to pay for their policies, asking Sanders, “You’ve called for big, new government benefits, like universal health care and free college. In a recent interview, you said you suspected that Americans would be, quote, “delighted” to pay more taxes for things like that. My question to you is, will taxes go up for the middle class in a Sanders administration? And if so, how do you sell that to voters?”

Sanders responded by touting his tax on Wall Street, which he says would fully pay for his proposals. The tax – more appropriately known as a financial transaction tax (FTT) – has previously been described the tax as a “Wall Street speculation tax.” Sanders claims that it will raise $2.4 trillion over the next ten years by imposing a 0.5% tax on stock trades, a 0.1% fee on bond trades and a 0.005% fee on derivative trades. (You can read more about it here.)

Guthrie followed up by asking pointedly, “Will you raise taxes for the middle class in a Sanders administration?”

Sanders replied in the affirmative, but explained, “Yes, they will pay more in taxes, but less in health care for what they get.”

Guthrie next moved onto Biden, asking about comments he made to wealthy donors, claiming that we should not “demonize the rich.” Biden says that “we’ve got to be straight-forward.” He then called out income inequality, declaring that “the one thing I agree on is we can make massive cuts in the $1.6 trillion in tax loopholes out there, and I would be going about eliminating Donald Trump’s tax cut for the wealthy.” Biden was, of course, referencing the Tax Cuts and Jobs Act (TCJA). You can read more about that here.

All of the candidates have touted new government benefits, prompting Guthrie to ask Harris whether Democrats have a responsibility to explain how they will pay for every proposal they make. Harris retorted, “[W]here was that question when the Republicans and Donald Trump passed a tax bill that benefits the top 1 percent and the biggest corporations in this country?”

Harris went on to say that she would propose a change to the tax code to include a tax credit up to $500 per month for every family that is making less than $100,000 a year. That would, she says, be “the difference between those families being able to get through the end of the month with dignity and with support or not.”

She added, “And on day one, I will repeal that tax bill that benefits the top 1 percent and the biggest corporations of America.” That’s another reference to the TCJA, which has been heavily criticized by some for lowering corporate tax rates to 21% and doubling the federal estate tax exemption amount, benefitting corporations and the wealthy. Following the markup in the Senate, the corporate tax cuts were made permanent under the TCJA, but the individual tax cuts will expire after 2025. Sanders subsequently commented that under the TCJA, “83 percent of your tax benefits go to the top 1 percent.”

Yang was queried about his signature policy, which is to give every adult in the United States $1,000 a month, no questions asked. Noticias Telemundo host and debate moderator José Díaz-Balart asked Yang to clarify how he could pay for the plan, which works out to $3.2 trillion a year. Yang explained that he would try a different kind of tax: a value-added tax.

According to Yang, if we had a value-added tax “at even half the European level” it would generate over $800 billion in new revenue each year. A value-added tax is similar to a sales tax, but not quite the same thing. A sales tax is a tax typically tacked onto the end of a sale of goods or services, much like state and local sales taxes are imposed. A value-added tax is a consumption tax but, unlike a sales tax, it’s collected at every stage along the production chain. One of the key components is the idea is that spreading the collection of tax out over many sources might reduce the potential for fraud – which means more taxes collected, less tax gap. You can read more about VAT here.

Noting that many of the candidates would provide health care coverage for undocumented immigrants, Guthrie turned to Buttigieg and asked simply, “Why?” Buttigieg replied that “our country is healthier when everybody is healthier.” He then the notion of community to taxes, noting that undocumented immigrants pay taxes, including sales taxes and property taxes. Biden echoed those comments in his follow-up. You can check out Forbes’ infographic about immigrants and taxes here.

Buttigieg also took on foreign policy with China, explicitly referencing tariffs. “Tariffs,” he says, “are taxes. And Americans are going to pay on average $800 more a year because of these tariffs.” Claiming that China’s “fundamental economic model isn’t going to change because of some tariffs,” Buttigieg said that we needed to “invest in our own domestic competitiveness.” You can find out more about tariffs here.

The focus on taxes continued with Biden citing his record in negotiating with Mitch McConnell to raise the top tax rate. Bennet disagreed, calling it “a complete victory for the Tea Party.” The deal, he noted, extended the Bush tax cuts permanently. He’s referring to a 2013 vote – sometimes called the fiscal cliff deal – which extended the individual tax cuts (but the tax geeks among us more favorably recall the permanent adjustment of the alternative minimum tax (AMT) for inflation). You can read more about the 2013 vote here.

Buttigieg was asked about his climate plan, and he responded by touting the benefit of a carbon tax, just as John Delaney had done the night before. With a carbon tax, you put a price on the emissions of carbon dioxide and other greenhouse gases; the idea is that making certain kinds of energy more expensive will encourage clean energy technologies. You can read more about carbon taxes from Forbes contributor Howard Gleckman here.

For the final question of the night, NBC’s Chuck Todd asked each candidate, “You may only get one shot, and your first issue that you’re going to push, you get one shot that it may be the only thing you get passed, what is that first issue for your presidency?” Harris was the only candidate to label taxes at the most important issue, leading off with “passing a middle-class and working families tax cut.”

For more on the candidates’ stances on tax, you can check out their websites:

You can find their websites here:

Biden administration rolls out a blueprint for a ‘renters bill of rights’ – Here’s what it includes
Bill Gates says no country ‘gets an A’ for its Covid pandemic response—including the U.S.
Head’s Up Insight: Here’s Where SECURE 2.0 Falls Short And Will Disappoint You Today
Your 2023 Guide To Entertainment And Meal Deductions
In The Famous Bird Streets Of Los Angeles, An Architectural Gem Hits The Market For $13.7 Million