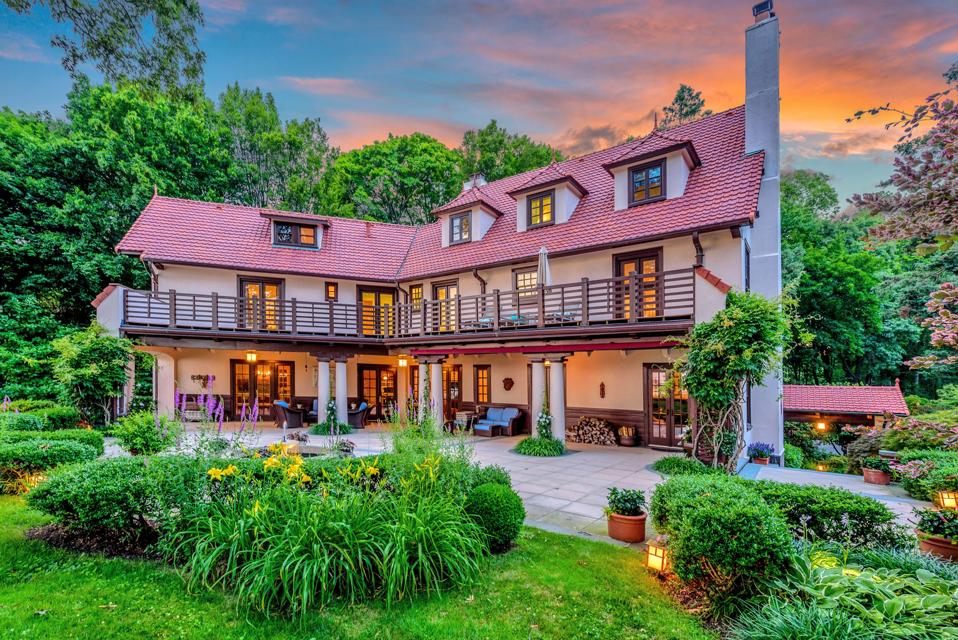 “The Stars and Stripes Forever” and other cherished marches from American composer John Philip Sousa will be heard across the country on the Fourth of July next week, so what better place to watch fireworks than from the lawn of his Long Island estate?

Sousa, who was born in 1854, lived in the six-bed, 5 ½ bath home at 12 Hicks Lane in Sands Point from 1915 until his death in 1932. He joined the Marine Corps Band at age 13 and was later its conductor for 12 years under five U.S. presidents, Rutherford B. Hayes through to Benjamin Harrison. Sousa eventually quit the Corps to start his own civilian band and focus on composing, and throughout his life gained worldwide recognition as “The March King.”

His house, constructed in 1907 and designed by turn-of-the-century architect Alexander Trowbridge, is listed through Maggie Keats of Douglas Elliman. It was originally priced at $9.85 million but has since been dropped to $8.995 million due to slow market conditions in the higher end of Long Island’s housing market, Keats said.

It’s still not a bad price to pay to live in a National Landmark, however, noted the home’s current owner, Bridgette Hirsch. The property is so well-respected among American patriots that military band members have taken trips to see it as a tourist destination, she said.

And while it retains some historic character, such as its landmark-protected exterior, along with its original dining room wallpaper that also decorates some rooms in the White House, the home has plenty of updates to make it comfortable for modern occupants, Hirsch added. She bought the home with her husband in 1994 for roughly $2.1 million thinking it was fully up-to-date, only to find out the home needed numerous renovations.

“We looked at it because the woman we bought it from was very fancy, and so we thought this house was all done,” Hirsch recalled. Instead, “we replaced everything.”  It now has amenities like a tennis court and two wine cellars, along with new plumbing, windows, heating and central air.

Its 2.6 acres of waterfront land, meanwhile, sits on the Long Island Sound in Nassau County, giving the home views of the Manhattan skyline and the New York City bridges from nearly every room, along a sandy beach and a deep-water dock.

Hirsch and her husband raised their four kids in the home, and are hoping to sell it to a family – or a music history buff, or anyone who will cherish it as much as they have. “I just want someone to love it the way we love it,” Hirsch said.

Interior Designer Jennifer Hunter Talks About Traditional Design And Her Career
Some borrowers may qualify for a student loan interest deduction, despite payment pause
8 Tips For Tax-Free Gifting In 2023
Nordstrom stock surges after activist investor Ryan Cohen buys stake in retailer
GM smashes expectations and guides toward a strong 2023, despite margin squeeze