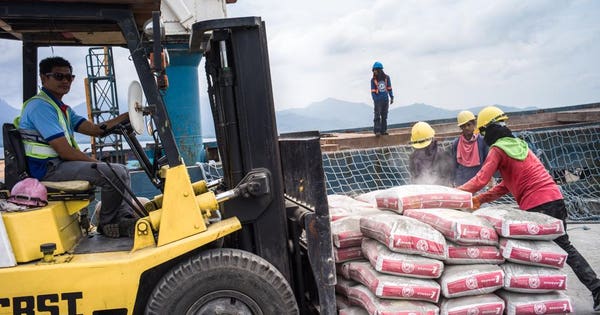 Japan is ahead of China in the Southeast Asia. In building the region’s infrastructure, that is.

That’s according to a recent Fitch Solutions survey published by CNBC. Japan’s outstanding projects in the Southeast Asia are valued at $367 billion. China’s projects are valued $255 billion.

Japan’s projects are concentrated in three of the region’s largest economies—The Philippines, Singapore, and Vietnam.

Japan and China have been competing to expand their influence in the Southeast Asia and get access to the region’s economic and strategic resources.

Fitch’s findings may come as the surprise to some, though. For a couple of reasons. One of them is that Japan’s economy has been in a three-decade long stagnation. And it has fallen far behind the Chinese economy, which is now the world’s second largest economy, about three-times the size of that of Japan’s.

Then there are China’s high-profile investments in countries like Malaysia and the Philippines, which have created a great deal of buzz in social media. In Malaysia, for instance, China has won the East Coast Rail project, one of the dozens of China’s infrastructure projects around the world – a bid to write the next chapter of globalization and advance Beijing’s geopolitical agenda.

The problem is that many of infrastructure projects won by Chinese contractors aren’t economically viable, as they are built at inflated costs and leave countries involved heavily indebted to Beijing.

That’s what happened in Sri Lanka, which borrowed heavily from Beijing to have its ports upgraded by Chinese contractors. When Sri Lanka couldn’t repay the loans, Beijing converted them into equity, assuming ownership and control of Sri Lanka’s two major ports.

The situation has fueled allegations that China seeks to entice strategically located countries (other cases involve Djibouti, and the Maldives) into debt traps that it then leverages to seize control of strategic assets.

That’s why some Southeast Asian countries have sought to re-negotiate the terms of the projects they have already assigned to Beijing.

Last August, for instance,    Malaysia’s Prime Minister Mahathir Mohamad canceled the East Coast Rail Link project, forcing China back to the negotiating table. And he won a new deal, which has cut the cost of the project substantially.

While it’s unclear whether these setbacks will help Japan widen its lead against China in the Southeast Asia, one thing is clear: Competition between the two countries for control of the strategic resources and the outposts of Southeast Asia will continue.

Debt Ceiling Uncertainty Will Wreak Economic Havoc, Even Without Default
Hate fast fashion? You can compost this new streetwear clothing line
Southwest CEO maps out a recovery after holiday meltdown: ‘We have work to do’
Cramer’s lighting round: Teck Resources is a buy
This Social Security change would be ‘easiest and quickest,’ Manchin says. What debt ceiling negotiations may mean for benefits