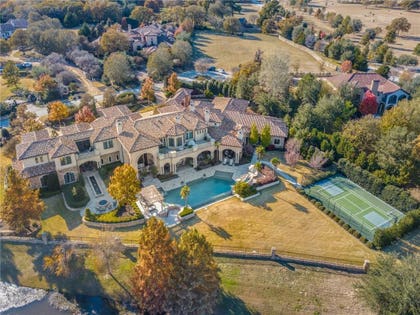 We see a pattern with former U.S. Secretary of State Rex Tillerson’s real estate inclinations: he likes to buy big, and buy from celebrities. Tillerson’s return to Texas steered him to Vaquero, one of North Texas’s most exclusive and private gated communities located almost midway between Dallas and Fort Worth. It is also expeditiously close to DFW Regional Airport.

And while the sprawling estate is so big you almost need a travelator, there is an elevator to shoot upstairs effortlessly.

If you don’t get lost roaming the interior — yes, I said 16,238 square feet, not at all uncommon in Vaquero — go outside: you might think you are at a posh resort. Tillerson has a 90,000 gallon swimming pool with a slide, a swim-up bar and sport court, even a private stocked lake to go fishing. There is an attached five-car garage and a separate garage for the golf carts, which everyone uses in Vaquero to get around and to and from the clubhouse.

The home, on famous King Fisher Road, was listed for $8.5 million and had come on the market last November. Sources say it sold for around $6.5 million and is said to be the highest recorded sale in Tarrant County in more than a decade.

Vernon Wells and his wife, Charlene, built the estate in 2010 and loved every minute of living in it, because the home was built to literally entertain a baseball team. They built their dream home in Texas after Wells retired to be closer to family. In fact, the couple met in Texas.

“Our first entertaining opportunity after the house was finished was a team party with the Los Angeles Angels,” Wells said. “Having teammates, who are all financially successful, comment on how stunning our house is, but how comfortable it was despite the size, and how well designed it is, was a huge compliment.”

Besides baseball teams, the Wells also filled the house with their children and friends. The close-knit family moved to be closer to schools. Vernon Wells told me he loved the way their home never felt too big or overpowering, despite its size.

Tillerson: Now back in Texas

A foyer big enough to be a grand entrance hall.

The formal living room would have been perfect for entertaining heads of state… or perhaps donors to a future presidential candidate?

The dining room is large enough to fit the whole family for any holiday dinner, or to host large scale events.

While the kitchen is loaded with the latest and greatest, it still has a cozy feel for a quick bite in here or the breakfast room.

Let the games begin right in this fun-loving game room!

Catch the latest flicks privately in the comfort of your own home theater.

The man cave: study has ceiling to floor shelves and two balconies for serious book collectors.

The master bedroom and spa bath are spacious and a retreat from the rest of the house.

One of the perks of buying a home from a top-earning athlete: they usually build great at-home gyms.

Like we said, the outdoors is a veritable resort, just in your backyard.

This fire pit is what apparently sold Rex Tillerson… along with the outdoor paradise.

None of the agents involved in the transaction will confirm the home was bought by Rex Tillerson and his wife, Renda, but Tarrant County deed records show that the property was purchased by a trust controlled by them, according to Steve Brown of the Dallas Morning News.

Tillerson retired as CEO of Exxon in 2017 to serve as secretary of state for the Trump administration. The job lasted slightly more than a year, Tillerson resigning in March, 2018. Owning a 16,000 plus square foot home is quite a change for the Tillerson’s, who also own a home in Fort Worth, about 15 miles west of Westlake, near the River Crest Country Club that is valued at $1.475. That home is only 5,400 square feet, a typical executive-sized in DFW. He and Renda, an avid equestrian, also own a horse farm north of Westlake near Argyle, considered North Texas horse country because of its loamy soil. That spread was previously owned by Dallas billionaire Charles Wyly. The Tillersons also own a small home in Watauga, a suburb of Fort Worth. They have been trying to sell a lake home in Horseshoe Bay, 50 miles northwest of Austin.

Vaquero is home to many a North Texas celebrity: the land, 525 acres, is a master planned development by Discovery Land Company. It was once the Hunt’s Circle T Ranch. They sold it to Ross Perot Jr., who sold to Discovery. Vaquero is seriously gated and offers membership in the newly-remodelled 28,000-square-foot Vaquero Club, a Hill Country-esque clubhouse with a killer Tom Fazio golf course, available only to property owners. The northeast Tarrant County community, located in Westlake, has become a magnet for the rich and famous. The list of who’s who over the years has included the Jonas brothers, the family rock band; many professional athletes including Rangers outfielder Josh Hamilton and first baseman Mark Teixeira; business leaders, such as the CEO of Burlington Northern Santa Fe, Matthew Rose. Glenn Beck moved into Vaquero when he departed Fox News and brought his production company to Texas; PGA golfers Justin Leonard and Brandt Jobe; former Dallas Cowboys quarterback Drew Bledsoe; golf instructor Hank Haney; FOX NFL Sunday Terry Bradshaw. Even Sean Payton, head coach of the New Orleans Saints, lived in Vaquero and commuted to NOLA after buying a 7800 square foot house and adding a disco for the kids.

Forbes has frequently named the town of almost 1,500 the most affluent neighborhood in the country.

Rex Tillerson and his wife Renda St. Clair in the Oval Office of the White House in Washington, D.C., U.S., on Wednesday, Feb. 1, 2017. Photographer: Michael Reynolds/Pool via Bloomberg

“Working with Vernon and Charlene Wells was a true delight,” says the listing agent, Alicia Chmielewski with Keller Williams. “They are a truly lovely family with impeccable taste. For a home of its size, Kingfisher Drive was on the market for a relatively short period of time.”

“I personally adored the fact that they had an entire spa wing with a therapy tub, massage room,  steam shower, and sauna. There was even a beauty salon. Every amenity you could ever dream for, all in this home,” says Chmielewski. “It was the gym, the batting cage, then the spa wing. With that 90,000 gallon pool with swim-up bar just out the back loggia, the home was really like a luxury resort in North Texas.”

What Looks Different And What You Need To Know About Your 2022 Tax Return
Real Estate Buyers Are Not Liars, Agents Just Need To Listen
Are State Tax Refunds And Rebates Federally Taxable? It Depends.
Vince McMahon open to leaving WWE for good if he sells the company, CEO Nick Khan says
Be Smart: Look For These Financial Exploitation Warning Signs From The DOJ