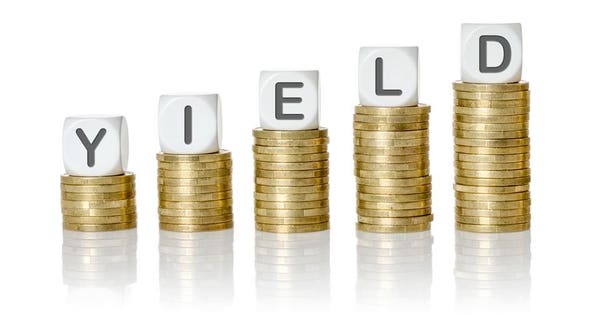 Retirees have a difficult challenge on their hands, which is to replace the income they will no longer receive from a paycheck. Social Security helps in this regard, as does a pension for those who have one. But many retirees will still face an income shortfall, cautions Ben Reynolds, a contributor to MoneyShow.com, an income expert and editor of Sure Retirement.

To make up the gap, retirees should consider investing in dividend stocks, particularly those with high dividend yields above 5%. Interest rates remain low by historical standards, which means traditional income-producing securities like bonds may not get the job done for retirees. For investors interested in individual stocks, high yields of 5%+ can be found without taking an unacceptable level of risk.

The S&P 500 Index, on average, yields only around 2% right now. The relatively low yield of the major U.S. stock market index is the result of a decade-long bull market. Fortunately, there are plenty of high-yield stocks that offer a much better payout than the broader market.

Invesco is a global investment management firm. It has more than 7,000 employees and serves customers in more than 150 countries. Invesco has over $975 billion of assets under management. The company has struggled to start 2019, due largely to the shaky performance of the U.S. stock market to end 2018, which is a critical driver of AUM.

In the 2019 first quarter, Invesco reported revenue of $887 million, down 7.4% compared to the prior year’s quarter. Invesco’s revenue decline was due to a 2% decline in average AUM was 2% lower than the company’s average AUM during the first quarter of the previous fiscal year.

Invesco stock trades for a low price-to-earnings ratio of just 8.6, based on expected earnings per share for 2019. This means investors have an opportunity to buy this highly profitable company with strong long-term growth prospects, at a measurable discount today. Not only is Invesco stock undervalued, it is also attractive for income.

Invesco ranks well in terms of dividend safety with an expected payout ratio of 53% for fiscal 2019. This should allow the company to continue increasing its dividend on an annual basis going forward. With a current yield above 6%, Invesco is an attractive high-yield stock for retirees.

Tanger Factory Outlet Centers is a Real Estate Investment Trust, also known as a REIT, which means its business model is to own and operate real estate properties for rental income. It is one of the largest owners and operators of outlet centers in the United States and Canada. It operates and owns, or has a stake in, a portfolio of 40 upscale outlet shopping centers across 20 states and Canada. The company leases over 2,900 stores that are operated by over 500 different tenants.

The company a 5% decline in first-quarter funds from operations (FFO), due to a small decline in portfolio occupancy. Tanger is not immune from the broader challenges facing the brick-and-mortar retailers, brought on by the rise of e-commerce retailers such as
. However, Tanger maintained its high portfolio occupancy at 95.4% in the first quarter, a very high level of occupancy for a commercial REIT.

Its main focus this year is on leasing and marketing their properties as they attempt to offset the impacts on FFO from previous rent adjustments and tenant bankruptcies. While the firm works to improve its portfolio, investors can take solace in the fact that the stock offers a very high dividend yield of 8.6%. Tanger pays investors very well to wait for the company turnaround to materialize. And importantly, the dividend appears secure. Tanger has a relatively low AFFO payout ratio of 63% expected for 2019. In addition, it enjoys a high level of balance sheet flexibility with a BBB+ credit rating, a high rating for a REIT.

Additionally, given management’s track record of success spanning nearly four decades and the fact that Tanger went through the Great Recession virtually unscathed (AFFO fell only 2.2% from 2008 to 2010 and the dividend continued to grow each year), the high dividend yield above 8% appears to be a secure payout.

Newell Brands is a consumer product manufacturer with a large and diverse product portfolio. Some of the company’s leading brands include Rubbermaid, Oster, Sunbeam, Mr. Coffee,
, Sharpie, Paper Mate, Elmer’s,
, and Coleman. At the present time, Newell is working through a significant restructuring. It is actively divesting itself of non-core brands with low profit margins and/or weak future growth prospects.

The company is selling off under-performing brands that are no longer a part of its future growth strategy. For example, Newell has conducted a number of asset sales over the past year. Its various transactions include the sale of the Waddington, Rawlings, Goody Products, Pure Fishing, Jostens, and most recently the United States Playing Card Company, maker of Bicycle playing cards. Selling off these brands has raised more than $2.5 billion of after-tax proceeds.

Fortunately, the portfolio reshuffling appears to be going as planned. Newell turned in better-than-expected financial results for its 2019 first quarter.
sales were $1.7 billion, down slightly from the $1.8 billion from the year-ago period due to a 5.5% decline from the impact of foreign exchange, as well as a decline in core sales.

But this was not unexpected, given the many divestitures the company has enacted over the past year. A much more positive development was that Newell generated positive operating income of $15 million for the first quarter, compared with an operating loss of $26 million in the 2018 first quarter.

The company has a high likelihood of returning to growth in the near future. Once the product portfolio transformation is complete, the company’s new assortment of brands should provide long-term revenue growth and higher profit margins.

Newell Brands has a number of qualities that enhance the sustainability of its dividend. Its core competitive advantage is its strong brand portfolio. Many of its brands hold leadership positions across their respective categories, which provides the company with growth potential and pricing power.

Newell currently pays an annual dividend of $0.92 per share, for an anticipated payout ratio for 2019 of 57%, which indicates a sustainable payout. Investors should closely monitor the company’s future earnings reports to ensure the turnaround remains on track, but assuming the restructuring materializes as planned, Newell appears to be a high-yield bargain stock.

Enterprise Products Partners is a Master Limited Partnership, or MLP for short. These are natural candidates for an income-focused stock portfolio, because MLPs widely offer high yields above 5%. Enterprise Products is a midstream MLP, meaning its business model is to store and transport oil and gas through a massive network of pipelines and terminals.

These excellent assets have fueled steady growth for many years. In the 2019 first quarter, distributable cash flow increased 18% to a company record of $1.6 billion, while EBITDA grew 17% to $1.63 billion. This growth was due primarily to record volumes in its crude marine terminals and continued robust growth in crude volumes from the Permian Basin, one of the highest-quality oil fields in the United States.

Future growth will be realized through higher throughput volumes for its existing assets, as well as new projects. The company has a large project portfolio, including the Shin Oak NGL Pipeline, which is expected to have total capacity of 600,000 barrels per day.

Altria Group is a consumer products giant. The company manufactures a variety of tobacco products including cigarettes under the
brand, as well as U.S. Smokeless Tobacco Company, John Middleton, and Nat Sherman. Altria also owns Ste. Michelle Wine Estates, and has a 10% ownership stake in beer giant
(BUD).

Altria is in a difficult period, characterized by falling smoking rates in the United States which threatens its major product line Marlboro, the most valuable cigarette brand. Altria’s cigarette shipments declined 5.5% last quarter.

Fortunately, the company maintains significant pricing power, as tobacco companies widely enjoy strong brand loyalty and manufacture a product with high inelasticity of demand. In the most recent quarter, net revenue increased 0.4% in the core smokable products segment as price increases more than made up for the decline in shipment volumes.

Altria is investing heavily to prepare itself for a post-cigarette world. For example, over the past year Altria has spent billions to diversify itself into two new product categories — e-vapor and marijuana. Altria made a $1.8 billion investment in Canadian marijuana producer Cronos Group (CRON) for a 45% equity stake in the company, as well as a warrant to acquire an additional 10% ownership interest in Cronos over the next four years.

In addition, Altria invested nearly $13 billion in e-vapor manufacturer JUUL Labs for a 35% equity stake in the company, valuing JUUL at $38 billion. This figure may give investors pause, and indeed Altria received some criticism for its huge valuation of the relatively new company.

However, JUUL has taken a commanding lead in the booming e-vapor market. Given the dubious future of traditional cigarettes and Altria’s heavy reliance on its Marlboro brand, the investment is necessary. Combined with the Cronos investment, Altria receives instant exposure to two huge growth categories.

AT&T is a telecommunications giant. It has over 100 million customers in the United States and Latin America. AT&T offers a variety of services, including wireless, broadband, cable, and satellite TV. The company generates annual revenue above $170 billion.

There should be plenty of dividend increases in the years ahead, as AT&T is making a huge investment in growth through the $85 billion acquisition of content giant
Inc. The acquisition gives AT&T access to a host of popular media brands, including TNT, TBS, CNN, and HBO. Time Warner also owns a movie studio as well as sports rights across the
,
,
, and NCAA. This is a transformation acquisition for AT&T, as it broadens the company’s service offerings beyond telecommunications.

AT&T will be a major player in content, which is very valuable for the company as it provides a competitive edge over other telecommunications providers and gives it a hedge against rising content costs. Last quarter, AT&T grew revenue by 18%, thanks in large part to the Time Warner acquisition. Adjusted earnings-per-share increased 1.2%, as adjusted operating margins expanded to 21.4% from 19.7% in the year-ago period.

AT&T expects to generate earnings-per-share of $3.60 in fiscal 2019. With an expected dividend payout ratio of 57% for 2019, AT&T should continue to raise its dividend modestly each year. AT&T has a secure dividend payout, a high yield above 6%, and has increased its dividend each year for over three decades. These qualities make AT&T a highly attractive dividend stock for retirees.

AbbVie is an excellent holding for retirees, because the company combines a high dividend yield with strong growth potential. It is a global pharmaceutical company with annual revenue of approximately $32 billion. AbbVie was spun off from its former parent company
(ABT) in 2013.

Today, AbbVie focuses on Immunology, Oncology, and Virology as its core therapeutic areas. Its most important product by far is multi-purpose drug Humira, which alone represented over 60% of the company’s 2018 net revenue. AbbVie faces a risk going forward, as Humira is now facing biosimilar competition in Europe, which caused international Humira sales to decline by 15% in the 2019 first quarter. Making matters more uncertain is that Humira will face biosimilar competition in the United States in 2023.

Moving to AbbVie’s current results, in the first quarter the firm’s grew operational revenue by 0.4% as Humira sales declined 6% worldwide. However, its new products generated strong growth, such as 34% sales growth for Imbruvica. AbbVie’s hematologic oncology portfolio grew revenue by 43% last quarter. This helped the company grow its adjusted earnings-per-share by 14% for the quarter. The company expects non-Humira product sales to exceed $16 billion by 2020, and $35 billion by 2025.

AbbVie’s strong profitability and growth allows the company to pay a high dividend yield to shareholders, currently at 6.4%. The dividend appears highly secure, as the company has an expected dividend payout ratio below 50% for 2019. Like AT&T, AbbVie is a dividend aristocrat, dating back to its days as a subsidiary of Abbott. AbbVie has a high dividend yield, along with strong dividend increases and a pathway for future growth, making it a very attractive stock for retirees.