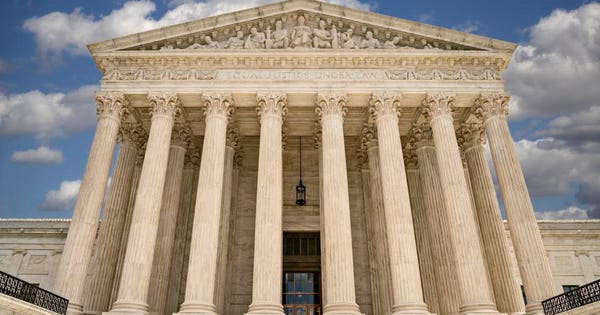 The US Supreme Court limited state taxation of trusts.

The US Supreme Court, on June 21, 2019, issued a unanimous decision on state income taxation of trusts that was taxpayer friendly. The Supreme Court held, in North Carolina Department of Revenue v. Kimberley Rice Kaestner 1992 Family Trust, that the law authorizing the State to tax any trust income that “is for the benefit of” a state resident, N. C. Gen. Stat. Ann. §105–160.2, violated the Fourteenth Amendment’s Due Process Clause. North Carolina attempted to tax trust income that had not been distributed to North Carolina beneficiaries solely on the basis that those beneficiaries lived in North Carolina. During the tax years involved  Kaestner had no right to and did not receive, any distributions. Nor did the Trust have a physical presence, make any direct investments, or hold any real property in North Carolina. The bottom line of the case is that a state cannot tax trust income merely because a beneficiary of the trust lives in that state.

Action Step #1:  If you’re a trustee or beneficiary of a trust that has been taxed on that basis, call your CPA and have refund claims filed for any open tax years you can.

The ruling in the Kaestner case was quite narrow and limited to the above conclusion. But the discussion in the Court’s decision was much more complicated and gives an indication when it may be permissible for a state to tax the income of a trust. It also leaves open a myriad of questions that might affect a state’s ability to tax a trust. Below are a list of factors and considerations, along with lots of questions, you might consider in determining if a particular state might tax a trust. Taxpayers should assume that those writing state trust income tax rules have already read the case and are planning changes to bolster their ability to tax trusts when the narrow facts in the Kaestner case do not apply.

Action Step #2: Call your estate planning attorney, and if you have an institutional trustee, your trust officer, and review what you might do to improve a trust you have to strengthen a position that tax is not due to a particular state. In many cases trusts can be moved, trustees replaced, existing trusts merged (decanted) into new trusts with better provisions to avoid state income tax. The Kaestner case recognized and approved the decanting of the trust in that case to extend the term of a trust which may have been a factor in the favorable ruling. So, you too may be able to have your trust improved.

The following is a list of some of the tax factors to consider based on the discussion in Kaestner:

3.     The trustee has exclusive control over the allocation and timing of trust distributions. This was important in Kaestner as a clear theme of the opinion was that the beneficiaries living in North Carolina could not control their benefiting from trust income.

4.     The trust is subject to governing law of a different jurisdiction then the taxing jurisdiction. The Trust in Kaestner was subject to New York law, not North Carolina law. Decanting might cure this defect if your trust was formed under the laws of a taxing state.

5.     The residence of individual trustees is a crucial factor. In the Kaestner case, no trustee lived in North Carolina. How will this apply in terms of an institutional trustee? Perhaps this suggests the benefit of using an institutional general trustee based in a tax-friendly jurisdiction. That is an important planning step that too often is not used as those creating trusts tend to often name family members as trustees. The drawback of that is family members named may live in a taxing state. It may prove much less costly to name an institutional trustee in a no tax state and pay their annual fee.  What does this criteria mean in terms of other trust positions? The Kaestner Court did not address other common positions in a modern trust. What of a trust protector? Trust investment director? Various power holders? All of these positions, if the individuals named reside in a taxing state, might taint the trust as subject to that state’s tax system? So, consider where the person you name as a trust protector resides. Perhaps a trust protector should act in a non-fiduciary capacity and/or reside in a state without a state income tax. Another option might be for the trust to name an entity, e.g. a limited liability company (LLC)formed in a tax friendly state (presumably the same tax friendly state where the trust is based) as trust protector (or investment advisor, etc.) and have the individual desired to provide services as a manager of that LLC. Will that suffice to prevent a high tax state from taxing the trust?

6.     The physical location of trust records. In the Kaestner case, the trustee kept the trust documents and records in New York, not in North Carolina. Where are your trust records kept?  In a modern digital age how relevant will this be when most if not all records might consist of cloud based digital records? Will moving all records to the cloud solve the issue?

7.     Trust asset custodians were located in a state other than the taxing state. Is it relevant where a large institutional investment advisor is located as to the state taxation? Yet this seems to be a factor noted by the Court.

9.     The trust should not have any direct investments in the taxing state. Might this suggest that any, even insignificant,  investment in the taxing state might taint the entire trust? Might those administering trusts be advised to divide the trust with one component trust holding any investments in the state, and all other investments being bifurcated in a separate trust? Some states take the position that any active business in their state will taint the entire income of the trust as taxable. If that situation affects your trust try to divide the trust. Many trust documents permit the trustee to divide the trust for a variety of reasons. If not, state law might permit division. If that isn’t the case, decanting may provide another possible way to cure this state tax issue.

10.  The trust should not own real property in the taxing jurisdiction. What if the real property is held in an entity, such as a limited liability company or other disregarded entity, that would characterize the property as an intangible asset, not real estate. Would that suffice to avoid the state taxation of the trust? Alternatively, as with a business activity in the state, consider segregating real property in a taxing state into a separate trust.

12.  The geographic location of trustee/beneficiary meetings was noted in Kaestner. What does this mean in an electronic age when web meetings are so common?

Kaestner was a very narrow holding but suggests that many trustees should be more carefully looking at the ability of states to tax trusts, and taking steps to minimize that risk.