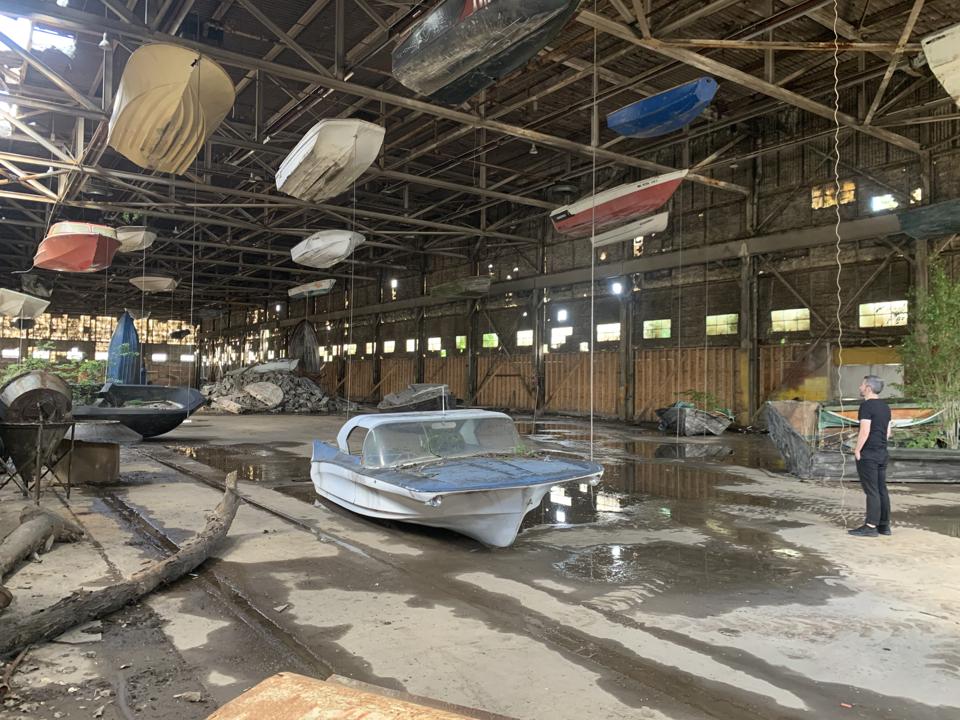 Scott Hocking throws wide the doors to a leviathan abandoned building, once used to assemble cranes, exposing his Bone Black art installation to a group of fellow artists and journalists in Detroit for a preview of Cranbrook Art Museum’s Landlord Colors: On Art, Economy, and Materiality, and its extension into the city of Detroit. Hocking’s colossal contribution is part of Material Detroit, a series of public programs around the city that complement the themes and artists in the primary museum exhibition, where Hocking’s work is featured.

The Cranbrook Educational Community also encompassing an idyllic refuge for artists in two-year residence with 24-hour studio access in a sprawling complex that includes meticulously organized archives, is located in bucolic Bloomfield Hills, about a half hour outside of the city’s storied Eight Mile Road. A sunny afternoon, after weeks of incessant rain, made it possible to see clearly inside, despite the absence of artificial illumination.

“My installation is pretty bonkers,” said Hocking. “I could do a few more things to it, but I probably won’t. You’re the first people to see it. For about 20 years, I have been photographing the phenomen of abandoned boats. People wait until it’s dark and dump them.”

Hocking collected 33 “pleasure boats” discarded throughout Detroit, most likely by suburbanites with “a house, two cars, and a boat” who were living the dream until the play money ran out. He stopped at 33, as he values it is a mystical number. It’s regarded as a master number in numerology, which means that it resonates at a higher vibration. “These people see Detroit as a place to dump,” he said. “It’s expensive to dispose of a boat properly, but it’s cheap to tie it to a telephone pole.”

Hocking spent more than a month amassing the collection of boats as metaphorical bones of Motor City’s once booming economy fueled largely by Henry Ford, whose legendary factories are now part of the canvas of a forgotten era. He applied “bone black” paint to the boats, an industrial pigment from animal bones that has been produced in Detroit since the 19th century, and suspended some to conspicuously dangle as a fallen fleet from the rafters.

“It’s been a crazy, chaotic five weeks,” he said. “I can’t wait to have a beer tonight. The last time I had a beer I passed out, I was so tired.”

His exhaustion, never evident as he breathlessly details his process and passion, is unsurprising to anyone who witnesses this sui generis project, with boats both hoisted to the high ceiling and arranged around the ground of the overwhelming space near Atwater Beach on the Detroit Riverfront.

“We drove everywhere to find a space for this project,” said Laura Mott, Cranbrook’s Curator of Contemporary Art, who collaborated with Hocking. “It’s important that it’s near the river, and linked to the river.”

The building is owned by the Stroh family, that founded a Detroit brewery in 1850. The Strohs started brewing beer in a family-owned inn during the 18th century in Kirn, Germany. During the German Revolution in 1849, Bernhard Stroh emigrated to the United States.

“We were very lucky to find this site. We fell in love with it,” said Mott. “We went through months of negotiations with lawyers.”

The installation at 900 Guoin St. utilizes a collection of the metaphorical bones of Detroit’s once prosperous economy—the many boats abandoned throughout the city. Free to the public, Bone Black is open Saturdays through Oct. 1 from 1-6 p.m.

Augmenting the laborious work, Hocking said he lugged rubble from a wall that was blown out by wind and scattered around the building while a Superman movie was filmed in the gritty industrial scene. “I had to move it all to the center,” he said, of making those remnants part of his art.

Hocking’s boundless enthusiasm is at the core of his work.

“My most disgusting project was

with abandoned tires. The cops came when I was collecting tires. I’m the crazy artist,” he recalled. “Other times people said ‘that’s my garbage, you have to pay me for it.’ One time, cops showed up and I had to show them a sketch of my boats, and then they got really cool and they said they would call me when they found a boat. If they thought they knew where a boat was, I had already found it, but I still gave out my card.”

“I have to be professionally mentally ready to interact with people at all times,” he said, noting that some are intrigued and encourage his urban foraging of particular found objects.

Hocking rented a special trailer to drag the boats to the building. “I had to do a lot of innovative stuff,” he added.

Aboard a Cranbrook Schools bus, the 44-year-old who was born in the western suburb Redford Township, and has lived and worked in Detroit since 1996, remarked on every block and its myriad influences on the city and the surrounding suburbs over the decades.

A fixture in Detroit’s rapidly emerging art world, Hocking’s tour of the city, swirled around imposing mansions (some preserved, others neglected) to blighted buildings sprouting trees — just like many of the boats that have become home to various fauna and flora over the last decade or so. He included shoutouts to art institutions, galleries, studios, and a stop at The Heidelberg Project.

Created in 1986 by artist Tyree Guyton, with help from his wife, Karen, and his grandfather Sam Mackey, better known as Grandpa Sam, the outdoor project in the McDougall-Hunt neighborhood on Detroit’s east side, just north of the city’s historic Black Bottom neighborhood, had been ordered destroyed by previous mayors, but its popularity among locals trumps petty local bureaucratic sensibilities. Guyton’s political protest was born from watching his childhood neighborhood crumble after the Detroit Riot of 1967 resulting in 43 deaths.

Guyton greets visitors, asking them to sign his guestbook. Some neighbors have embraced the outdoor display, allowing the artist to intertwine their homes into the evolving installation.

Nothing in Detroit is static. Hocking looks back on his multifaceted career with humor, appreciating the breadth of his commissions and self-directed projects.

“One of my gigs was to redo the kangaroo area of the zoo,” he said “They wanted it to look like Mad Max, so I did that.”