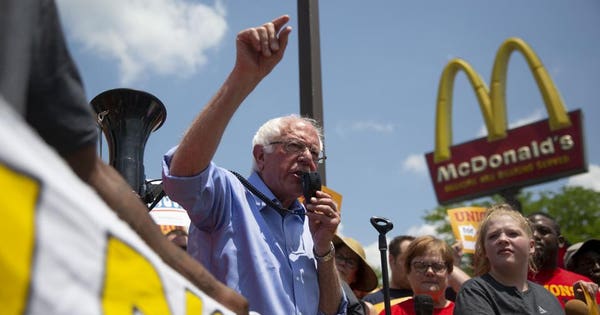 Americans dreaming of a socialist America, but having no clear idea what it would look like, should talk to the Greeks. Greece has tried almost every socialist policy that is there to try, from minimum wage hikes to free education and free healthcare. And it has seen the consequences of these policies: massive business failures, soaring unemployment, a soaring national debt — and a long depression, worse than the Great Depression of the 1930s.

Americans have a love-hate view of socialism. In the early part of the 20th century, socialism was very popular in America, as it was in most parts of the world. But it became very unpopular in the 1950s and the 1960s — the Cold War era, when advocates of socialism could get into trouble, even by talking up its merits.

Nowadays things have changed. Socialism is regaining in popularity in America, with over 40% of Americans thinking it’s a good thing.

That’s according to a recently published Gallup survey. These Americans think that socialism could provide solutions to the country’s chronic problems. Like persistent poverty among certain groups, the soaring costs of education, and inadequate healthcare coverage.

Though not a majority yet, this figure is far too large for a country that still serves as a model of free enterprise capitalism for other countries to follow.

The problem is that these Americans do not seem to have a clear idea of what socialism is and what it does to an economy over the long term.

That’s why they should look elsewhere in Norway, Denmark, and Canada, which had some success in experimenting with a limited number of socialist policies, at the expense of economic growth.

Then there’s Greece, which has been experimenting with a broad number of socialist policies.

And the time is ripe for American socialists to talk to the Greek voters, as they are getting ready for the July elections, when the last chapter of the country’s leftist movement is about to be written.

Greece’s Minimum Wage before and after The Crisis

During the last forty years, a vast majority of Greeks fell in love with socialism. That’s why they tried almost every form of socialism was there were to try. beginning with a wave of minimum wage hikes that disconnected pay from performance.

How many? Hard to keep count.

Wait, there’s more. There’s the “socialization” of a large part of the economy that turned politicians and government bureaucrats into owners and managers of corporations. Like the Old Olympic Airways, which hardly kept any count of how many tickets it sold or how much it paid its suppliers, employees employed.

And there was free education provided by government-owned institutions. Completely free, that is, to students who passed the national entry examination, including free tuition, free books, and free meals and accommodation to those who met certain income criteria. In some cases, these benefits went on forever, as being a “student” turned into a career.

Above all, there was free healthcare, provided by government-owned infirmaries and hospitals, without co-pay to deal with what economists call “moral hazard.”

The list went on and on, as socialist leaders from the entire spectrum of the leftist movement took their turn adding to the wish list of socialist policies and helping the leftist bubble grow bigger and bigger.

To some that sounded like a paradise. But, as economists will tell you, there is no paradise in a world with scarce resources. Someone must pay the bill for every policy. Taxpayers and bondholders, that is.

But with companies unable to deal with minimum wage hikes and other mandates, and either closing their doors or heading for neighboring Bulgaria — and with unemployment soaring — there weren’t that many companies and people left to tax. And with bondholders heading for the exits, there was no place to borrow either.

We all know what followed: the worst depression since the 1930s.

But Greeks didn’t learn the lesson. They continued experimenting with different forms of socialist ideas, helping the leftist bubble grow bigger and bigger. Until the recent regional and European elections, that is, when the leftist bubble began to burst.