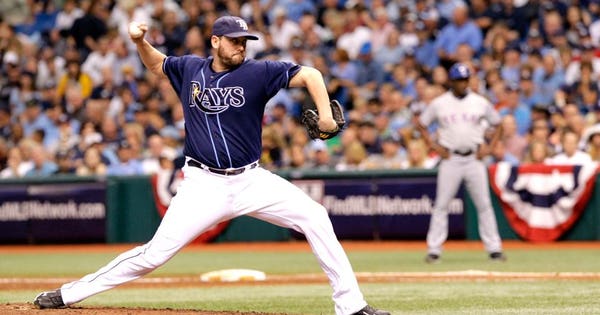 Earlier this afternoon, ESPN’s Jeff Passan broke the news that the Tampa Bay Rays could become a two-city team, playing the early portion of their season in Tampa and migrating north to Montreal for the hot months. Under the plan, Passan reports, each city would build a new stadium to house the team for 41/40 or however many games each season that are split among the two.

We are going to forget for a minute about the complications involved in convincing two cities to each build a stadium for half of a baseball season. Given attendance numbers, Tampa’s new stadium may have to resemble a minor league ballpark, though there is little doubt that baseball-hungry and sports-crazy Montreal would sell more tickets.

We will ignore that such a plan would likely have to get through the MLBPA (players’ union), who would have to agree to a team forcing its players to obtain housing for themselves and their families for part of the season in one city and housing nearly 2,500 miles away for the remainder of the season.

Finally, we will have to suspend our belief that the MLBPA would allow Rays players get hit with additional taxes for a quarter of the season’s games by playing in Montreal. While I sympathize with the hardship players’ families would endure and added living expenses they would incur, I am most concerned about the taxes they will have to pay.

As a team based in the income tax-free state of Florida, Rays players pay only the federal income tax (max rate 37%) on their home games. If suddenly games home games shifted to Montreal, players will pay a maximum rate of 53.31% on those games.

Athletes both in the US and Canada are taxed based on the ratio of duty days in the jurisdiction compared to total duty days for the season. In 2019, Rays players will perform a total of 224 duty days from the beginning of Spring Training through the end of the season. If they play 40 games in Montreal in a season, 17.86% of each player’s salary will be taxed at Quebec rates.

As US tax residents, the players would receive a foreign tax credit for some of the Canadian taxes paid on those Montreal games. The credit is calculated by determining the US taxes paid on Canada-source income. Such income includes the allocable wages for all games played in Montreal, which are taxed in Canada at the Canada-Quebec rates and those played in Toronto, which are exempt from taxation in Canada based on the US-Canada tax treaty.

Because the Blue Jays are a division rival, the Rays play nine games in Toronto each year. This means that over 18% of their total Canada-allocable income used to calculate the foreign tax credit is not even taxed in Canada.

So what is the real world impact of this potential partial-season move? The Rays have the lowest payroll in baseball, so not much overall. A player making the league minimum of $555,000 would pay an additional $9,600 of taxes. A player making a million would pay $16,000 more than he currently does. The Rays’ highest paid player makes $15 million. He would pay an extra $215,000.

Players from teams visiting the Rays in Montreal would not be impacted tax-wise by their move. Under the US-Canada tax treaty, their income earned in Canada is exempt from Canadian taxes.

In the end, this partial-season plan would be similar to the Rays playing half of their season in California. They would still be a more attractive team tax-wise than any of the California clubs. But let’s face it, this move will never happen. Today’s announcement was nothing more than MLB’s effort to get Tampa and Montreal to compete over which city will be the permanent home for the really good but largely unseen Rays. If I were a gambler (I’m not), I’d bet on Montreal to become the team’s permanent home before we see a split-season scenario.