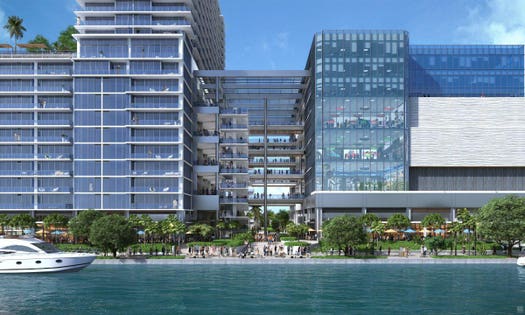 The mixed-use River Landing development in Miami is emblematic of the growth of the new Florida.

“Florida is America’s Australia,” goes the set-up line for a well-worn Florida joke. But the laughs are increasing at the expense of anyone short-changing Florida and the steadily growing economic might the Sunshine State is delivering to the nation and the world.

New York and New Jersey watched a combined 200,000 residents move away in the last two full years. When folks relocate from those two states, the most popular destination for them is Florida. Not coincidentally, Florida recently displaced New York as the nation’s third most populous state. The Florida Chamber of Commerce has noted the state’s gross domestic product has surpassed $1 trillion. That would put Florida in 17th place among the world’s largest economies, were the state an independent nation.

Once highly prone to boom-and-bust cycles, the Florida economy is now far more diverse and robust.  That is directly benefiting the state’s real estate market.

Among those profiting is Andrew Hellinger, co-founder of UrbanX Group, currently developing River Landing Shops & Residences on the Miami River, west of downtown Miami. The 2-million-square-foot mixed-use development will include a pair of 24-story residential towers and a 7-story retail and office building.

“The rapid growth of Florida’s major cities, like Miami, Orlando and Tampa, is propelling Florida’s economy,” Hellinger says. “We can’t build enough housing to accommodate the demographics growth, fueled by emerging industries and new companies entering this market [of Miami]. UrbanX is bullish on Florida and on its fast-paced growth.”

While the state economy once rested disproportionately on tourism dollars, Florida GDP today is based as well upon international trade, agriculture, aerospace and aviation. The Kauffman Foundation 2017 Index of Startup Activity reported South Florida occupies the number one spot in terms of new start-up activity. This year, the Miami-Fort Lauderdale area ranks first in business creation among the 40 largest U.S. metros.

Business and population growth in Florida has meant real estate expansion. The state has seen billions invested in new real estate projects over the past decade. Many of the projects are nothing if not ambitious. For instance, plans are underway to create the country’s largest retail and entertainment mecca, American Dream Miami.

Miguel Diaz de la Portilla, partner at Saul Ewing Arnstein & Lehr LLP in Miami, focuses his practice on land use, zoning and code enforcement, among other areas. He reports the fact American Dream Miami’s developer, Canada-based Triple Five, chose Miami for the development is evidence of the city’s strong fundamentals.

“Since we secured the land-use and zoning approvals for American Dream Miami last year, we’ve gotten a lot of inquiries from developers from the Northeast . . . looking to enter the Florida market. If you think about it, that’s not surprising, since New York contributed the most to Florida’s population inflow in 2017, according to recent census data.”

Forbes recently ranked Orlando as the number one focus of real estate investment. That’s partially because the city, which is expected to eclipse 100 million visitors this year, is already the number one traveled-to city in the U.S. That standing is likely to be solidified by the August 2019 unveiling of Walt Disney World’s Star Wars: Galaxy Edge, and the additions to Universal Studio’s Wizarding World of Harry Potter.

Even smaller Florida markets like Lakeland-Winter Haven, nestled between Tampa and Orlando, are booming. Developers are betting on demand growing for land between those two metros as the two expand outward toward one another. That hasn’t been lost on developer Noah Breakstone, managing partner of BTI Partners, a Fort Lauderdale investment and development firm with 60 years of experience in Florida residential and commercial real estate developments.

“Historically, most in the real estate industry focused on South Florida,” he says. “But now, we are seeing a major shift, with real estate investors coming from all over the world to all areas of Florida.”

Hate fast fashion? You can compost this new streetwear clothing line
IRS Extends April 18 Tax Deadline To May 15 For Georgia & Alabama Storm Victims
Bed Bath & Beyond beefs up legal team ahead of possible bankruptcy filing in New Jersey
A Closer Look At Forthcoming Tax Guidance On Electric Vehicle Credits
Over 200 millionaires urge Davos elite to up taxes on the ultra-rich