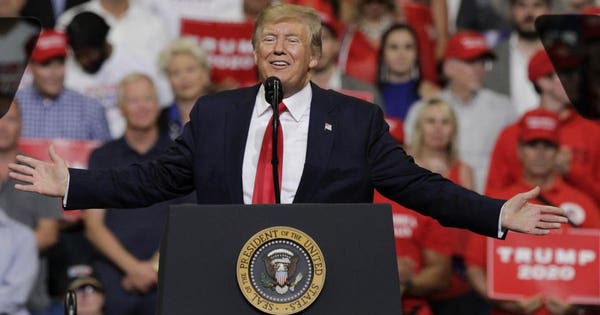 U.S. President Donald Trump gestures while speaking during a rally in Orlando, Florida, U.S., on Tuesday, June 18, 2019. Florida’s booming job market may be a key factor in the 2020 election. Photographer: Marco Bello/Bloomberg

Since President Trump signed the big tax cut and reform act in December 2017, the pace of private-sector job creation in the nation’s 27 low-tax states has doubled that of their high-tax peers through May of 2019, according to data released today from the U.S. Bureau of Labor Statistics. Manufacturing job growth is even higher with a 126% job-creation advantage in states with low taxes.

Overall, the 27 low-tax states saw private-sector job growth of 3.2% in the 18 months following the federal tax cut, with manufacturing payrolls growing 3.0%. The 23 high-tax states grew their private sector employment by 1.6%, half as fast as the least taxed states. Manufacturing jobs grew 1.3% over the 18-month period in the high-tax states.

This job growth advantage is likely due to the Tax Cuts and Jobs Act of 2017’s limitation of the deductibility of state and local taxes (SALT) deduction to $10,000 per filing household. This change in the tax code has shifted more than $85 billion of capital from the 23 high-tax states such as California and New York to low-tax states such as Texas and Florida by ending the federal subsidy for high state and local taxes.

Data suggests that about 500,000 jobs were created in low-tax states that might have otherwise gone to high-tax states absent the change to the federal tax code.

Nevada led the way in private-sector job growth from December 2017 to May 2019 with 5.9% growth in its private sector payrolls. Of note, Nevada, with no individual income tax, is next door to California, with the nation’s highest marginal income tax rate, 13.3%. Nevada also generated the highest rate of manufacturing job growth with 15.9%. The table below displays the top ten highest growth states for both private sector and manufacturing jobs.

Nevada’s booming jobs market carries interesting 2020 political ramifications, given Hillary Clinton only won the state by 2.4% in 2016, putting the Silver State in play for Trump’s 2020 reelection effort. Florida, a key 2020 swing state, is also in the top ten in both categories.

At the other end of the spectrum, among the high-tax states, former manufacturing powerhouses Massachusetts and New York lost 0.8% and 0.2% of their manufacturing jobs respectively from December 2017 to May 2019. Pennsylvania shed 0.1% of its manufacturing jobs, with the state’s anti-growth policies acting to cancel out President Trump’s pro-growth tax cuts and regulatory reform. Pennsylvania’s private sector job growth in the period was 1.4%.

That states with lower taxes and less regulation are receiving an outsized benefit from President Trump’s tax cut is borne out by the comparative rates of growth before the tax cut, when the low-tax states saw only a modest job growth advantage in the 23 months before the tax code reform, 1.9% on an annualized basis compared to 1.4% for the high-tax states—a 35% difference then compared to 100% in the past 18 months.

Priscilla Presley Files Court Challenge After Lisa Marie’s Death—But It Won’t Be Easy
African-Americans And Latinos Forced To Rely More Heavily On Family And Friends To Handle Financial Shocks
Here’s where the jobs are for January 2023 — in one chart
Fair Tax Act Of 2023 Has Rate That Varies
Wait until age 70 to claim Social Security: ‘The return on being patient is huge,’ says economist