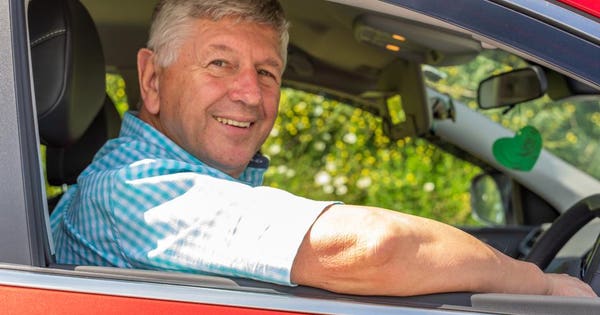 Most of the talk about the sharing economy revolves around millennials, those 20- and 30-somethings who are now regentrifying and populating many of our urban areas. Indeed, millenials are, and have always been, at the heart of the sharing scene, ready to embrace the latest concept for staying connected and getting around. However, when it comes to apps that make life better or easier, Uber and Lyft, the ride-sharing apps, are appealing just as much to older adults, especially boomers.

I use both apps quite a bit when I travel. I’ve been delighted to give up rental cars in most of my preferred vacation spots and ride sharing makes great economic sense when I travel for work. More recently, I discovered ride sharing in my home town when a load of gravel for a landscaping job was unceremoniously dumped in the driveway outside my garage, just when I needed to drive to an appointment. My first instinct was to call the client and try to postpone my meeting; then I realized that was entirely unnecessary. I grabbed my phone and a few taps later my Lyft ride was on its way to pick me up at my door. I made it to my appointment with time to spare, since I didn’t have to hunt for a parking spot and hike five blocks.

Most people I know use Uber or Lyft or both. Among my friends there are still a few holdouts – people who don’t like Uber’s treatment of drivers or are spooked by the stories of unsafe vehicles and drivers who have proved less than honorable, but those seem to be fading in memory as both companies apply more acceptable labor policies and stricter safeguards for both their drivers and their riders.

It seems completely obvious to me that ride-sharing apps are here to stay, and both Uber and Lyft are now publicly held companies so their practices and policies will be easier to track. The old, entrenched taxi companies had an opportunity to compete in this arena early in the game – they had the cars and the drivers – but they missed the boat completely and the most they can hope for now is playing catch-up. But that is a story for another day and another writer. My reason for jumping into this particular pond is to comment on the advantages ride sharing carries for older adults.

Lyft’s mission is to improve peoples’ lives with transportation and they quickly realized that a huge percentage of our population are older adults. The number of Americans over 65 will double in the next 40 years, from 46 million today to over 98 million by 2060. As people reach their 70s and beyond, many will lose the ability to drive themselves where they need to go, especially at night, and will have to rely on public transportation or ride services. Since public transportation is nearly non-existent in rural areas, that leaves elders with limited options. Enter ride sharing.

In addition to challenges with vision, an increasing number of older adults are aging alone. The percentage of divorce among adults 65 and older has increased four-fold over the last 40 years; children move away to take job offers in large, expensive cities; those without children are much more numerous than in the past (almost 20% of boomer women are child-free). These trends in the lives of older adults make ride sharing a compelling addition to the line-up of services necessary to support older lives. An even greater advantage of ride sharing for older adults is its potential to relieve some of the crippling isolation that can befall those who live alone without regular access to the outside world.

Boomers are comfortable enough with smartphones that using Lyft and other ride sharing services should not pose a problem in the future. However, in an effort to capture the market of today’s over-75 crowd, Lyft has developed a platform called Concierge, which enables organizations to request Lyft rides for anyone from one central point. That service has been utilized by senior living communities and senior centers to coordinate rides for their residents or members.

Lyft has also partnered with GreatCall. Existing GreatCall customers use their Jitterbug phones (the flip-phones with the large dial face, advertised in AARP magazines) to press zero and speak with an operator who books the Lyft ride for them. The operator has access to Lyft’s Concierge platform, which lets them contact the assigned driver to alert them that the older passenger may require assistance. Billing for the ride then appears on the user’s GreatCall statement. GogoGrandparent is another Lyft partner that helps older adults secure a ride without the use of a smartphone.

Older ridership is not, however, the end of the story about the connection of older adults to the ride sharing platforms. According to Lyft’s 2018 Economic Impact Report, 25% of Lyft drivers are over the age of 50. I spoke with a few drivers, all between the ages of 70 and 82.

Of the drivers I spoke with, Eileen has been driving the longest, at six years. She has spent all her life in the Boston area and when Lyft entered that market, Eileen wasn’t far behind. She has been driving ever since. Bob, the oldest at 82, has been driving in the Portland, Oregon metro area for six months. He told me it has “restored his faith in human in nature” by allowing him to drive ordinary people to do ordinary things. Both he and Eileen love the work because it gives them a tremendous amount of freedom. When they feel like driving, they just log in and wait for a “ride request.” Neither of them drives at night and they don’t do it full time. Today, many drivers of all ages drive for both Uber and Lyft, but Bob and Eileen only drive for Lyft.

Another person I spoke with was Monte. His favorite part of the job is the opportunity driving gives him to interact with people. Ride-share driving is part of a very eclectic life for Monte, who is a motivational speaker, has a YouTube channel and podcasts his experiences on his “Dr. Fantastic” show. Like Eileen and Bob, Monte only works 4 hours per day and prefers driving during daytime hours. He has been driving for a year and works for both Lyft and Uber.

When I asked these older drivers whether they had had any scary situations or unpleasant experiences as a ride-share driver, all three said they had not. However, they were all quick to add that they only drive during the day, avoiding bar hours and any time drunks might need a ride home.

After talking with Eileen, Bob, and Monte, I am even more a fan of ride sharing. There are so many untapped possibilities. I learned from Bob that the Adidascompany, headquartered in Portland, had recently started funding ride-shares for all its employees during a huge reconstruction project that wiped out the employee parking lot. I also learned that many service departments in car dealerships have scrapped their “loaner” programs and are now sending their customers home via ride sharing apps.  My husband and I even talked recently about whether we could get by with one car – an idea that would have been unthinkable before ride-sharing. Yup, I think ride sharing is here to stay.

The first ETF is 30 years old this week. It launched a revolution in low-cost investing
IBM tops revenue estimates, says it will cut 3,900 jobs
LeBron James NBA Finals jersey expected to fetch up to $5 million at auction
Roth IRA conversion taxes may be trickier than you expect. Here’s what to know before filing — or converting funds in 2023
Bill Gates is ‘very optimistic’ about the future: ‘Better to be born 20 years from now…than any time in the past’