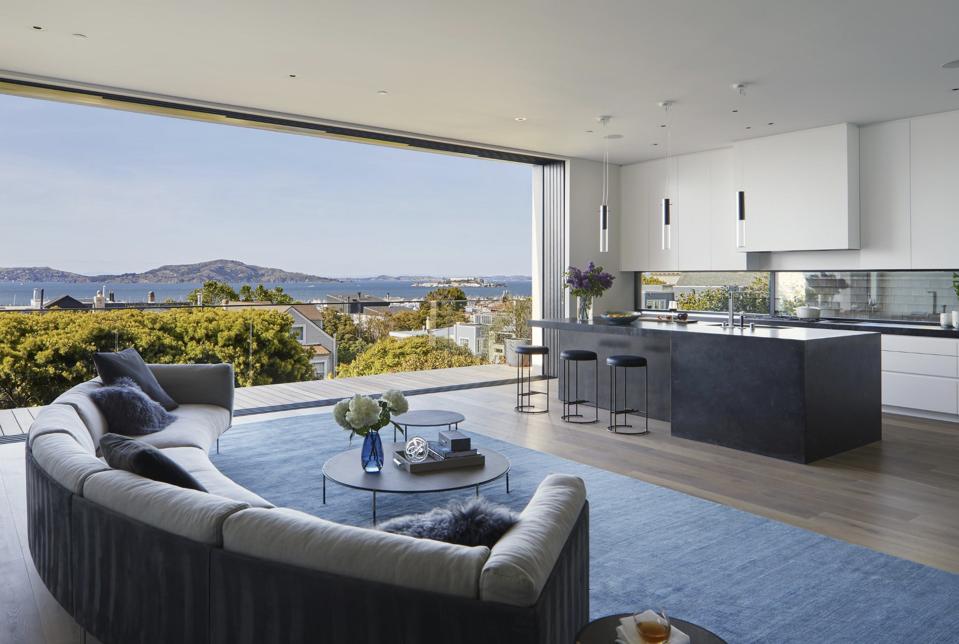 This 8,500 square foot new build in San Francisco follows in the wellness footsteps of its predecessor—a $45 million home in Russian Hill by the same developers (Troon Pacific)—with a similar air filtration system that completes a whole-house air change every two to three hours, ventilation outlets in the closets (even inside the shoe cabinets), shielded wiring, an Everpure water filtration for all the water in the house (not just the drinking water) and a grey water collection system that cleans and reuses the water for landscape irrigation.

With an ask of $34 million for this six-bedroom, eight bathroom it is the second highest-priced listing currently on the market for San Francisco, only beaten by its $45 million fraternal twin mentioned above (which has an extra thousand square feet to boost its value).

The centerpiece of the commitment to whole health is the ‘wellness level’ that includes a massage room, gym, sauna and a steam shower. The fully retractable glass doors open out to a backyard with grill station and built-in seating around a firepit (not visible from this angle, they’re further down the backyard). Note the understair lighting that adds a nice, yet practical touch to transition from the patio to the rest of the yard.

The indoor/outdoor living arrangement is a common theme for several of the home’s five levels. Above is what developers have dubbed the ‘penthouse level’ which has a full bar and an entertainment room or could be used as a private bedroom suite with full access to a deck overlooking the neighborhood with the Golden Gate Bridge in the distance.

But perhaps the most sought after perk in San Francisco is extra parking, and here the car lift makes it possible to add an extra car to the garage, creating at total of three parking spaces for the property. The garage also has a Tesla Power Charging Wall, pet spa and catering area so it can be turned into an entertaining space if you don’t have vehicles parked there. Other tech features in the house include a Lutron HomeWorks lighting control system and Savant Smart Home automation system.

Inside things are still subdued with a marble accent wall in the living that ties into the color scheme of the floating stairs. Don’t want to take the stairs all five stories? The house has an elevator that goes to each level.

Here’s one of the bedrooms with a private balcony. The designers used frosted glass on this balcony to create more privacy, instead of the clear glass on the other levels.

There is a more secluded dining area set back from the open air arrangement in case you want some protection from the outdoors.

If you do want to take in the great outdoors here’s the views from the upper level, with Alcatraz off in the distance.

The listing is with Val Steele of Pacific Union and more information can be found on the sales website for the property.